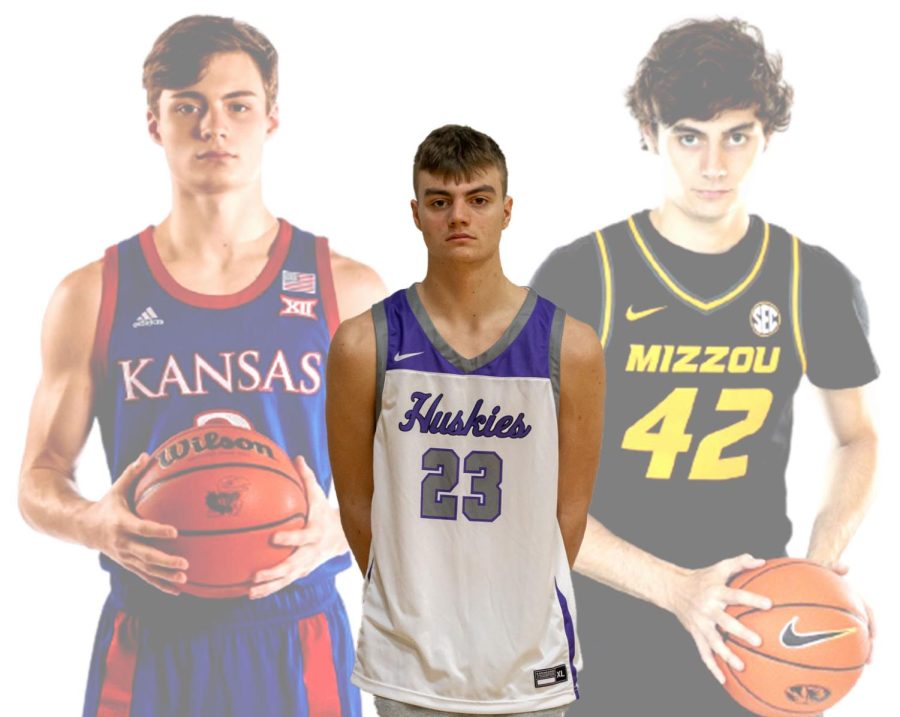 Junior Landon Braun discusses what it’s like to attend school after his brothers have graduated and the influence they have had on him. “My brothers are the reason I love [basketball]. If it wasn’t for their dedication, I wouldn’t have ever become a student of the game,” Braun said.

While junior Landon Braun never played high school basketball at the same time as his older brothers, he explained the effect their high school athletic careers have had on him. Christian and Parker Braun were each basketball state champions at Northwest. Both currently play Division 1 basketball: Parker at Santa Clara University and Christian at the University of Kansas.

“It’s a lot of pressure, obviously. Together, my brothers won three state rings here, so I’m being held to that standard,” Landon said.

Following in his brothers’ footsteps, Landon began playing basketball at Northwest during his freshman year. Although he has since come to enjoy the sport, initially, Landon said he hated it.

“I resented the sport, just because my brothers played it, and I think the pressure got to me when I was younger,” Landon said. “Since then, I’ve embraced it, but I didn’t really play until I was a freshman.”

Landon’s mom, Lisa Braun, shared some insight as to why Landon disliked basketball growing up.

“He didn’t like it the way my other kids [did]. He felt like he was kind of in their shadow,” Lisa said. “I saw him really turn it around when Covid hit and we had all the boys home and a bunch of their teammates too. They really just kind of worked out and played with him; he has really caught fire ever since.”

Though Parker and Christian are off playing college basketball now, Landon said he cannot seem to escape their reputations at Northwest.

“In games, I hear about [my brothers] a lot. People will always say, ‘they’re better than you,’” Landon said.

Even off the court, Landon said he finds himself being compared to his brothers.

“When [my brothers] are in town, we’ll sit and watch their film. We’ll turn on old high school games, and it’ll just feel like their team is so much better than ours, it’s unbelievable,” Landon said. “My brothers played for the best team this school ever had, so it’s hard to compare my team and theirs.”

2019 graduate Christian Braun said no matter what Landon may think, his brothers believe in his skill set.

“He looks up to us and he probably struggles with that a little bit, but we are all confident in his abilities,” Christian said.

Landon’s parents were Division 1 college basketball athletes as well, so Landon said he often feels his parents expect him to achieve the same, despite what they say.

Donald Braun, Landon’s dad, explained that while he thinks siblings and athletes will naturally compare themselves to one another, they ultimately need to know their own identity.

“[Our boys] are not playing for or living for anyone but themselves. There are obviously certain experiences [that evoke] comparison, but they’re all different. They don’t have to live up to anything,” Donald said.

Christian said although the pressure of their legacies may get to Landon, he believes that his and Parker’s basketball careers have positively impacted Landon.

“I think it’s kind of been hard on him because a lot of people won’t let him just be [himself], and enjoy what he brings. They have a lot of expectations for him. I have no doubt that he’s [going to] be successful in his own way and on his own merit. He’s not Parker and he’s not Christian. He will find his way and I’m sure he’ll be good at it,” Lisa said.

Despite the pressure Landon receives, Landon said he has a good relationship with his brothers.

“Until I was 14 years old, I didn’t have any real conversations with [my brothers],”

Landon said. “But I feel like I woke up one day and we were just best friends. And we’ve been close ever since.”

2020 graduate Campbell Newby, older sister to junior Kate Newby and freshman Charley Newby, said she and her sisters have great relationships with one another.

“It’s like a built-in friend group. We’re all pretty close in age and we’re all girls, so we have a lot in common,” Campbell said.

Kate said attending the same high school as her two siblings has helped their relationships. For the short time Kate and Campbell were in school together, Kate said they found ways to connect.

“On late arrival days, we would go to Vibe [Nutrition] before school, which was really fun,” Kate said. “We could relate about teachers and [Campbell] could help me with homework.”

Like the Brauns, the Newby girls shared a common sport: cheer. According to Kate, cheer became a great bonding experience for the sisters.

“It made it easier for me to have an older sister on the team, and now I get to do that for Charley,” Kate said.

However, being a part of the same cheer team created some conflict between the sisters. Campbell explained that while she was a cheer captain, Kate had a difficult time respecting her.

“When I was hard on her, she didn’t take it very seriously,” Campbell said. “Throughout the year, she got used to it. And it’s not like I harped on her all the time, but I think in the end it made her better.”

Kate agreed with Campbell, saying she did struggle with respect. She also added that Campbell’s criticism has shaped her into the captain she is today.

“From her, I learned how to lead a team to success, and what it takes to be a leader. I had a very great role model to look up to and Campbell taught me everything I needed to know about being a great cheerleader and captain,” Kate said.

Though all three girls participate in the same activities, Kate found that her parents do not compare the sisters as much as she does.

“I think I compare myself to Campbell more than anyone else does,” Kate said. “I’m doing all the clubs she did, because I know she was successful, so then I feel I have to do [the same clubs] to be successful.”

As the youngest, Charley said she has had a different experience, as she said her parents do occasionally compare her to Kate and Campbell.

Crystal Newby, mother of Campbell, Kate and Charley, responded to Charley’s viewpoint, and said that although she is occasionally compared to her sisters, the comparisons are often positive.

“She has [had] a lot of firsts, and a lot of accomplishments and gifts that the other girls don’t have,” Crystal said. “She’s definitely made up for it. Her B is doing just fine.”

According to Campbell, as the oldest, she does not compare herself to her sisters, but she often uses her experiences to direct their high school careers.

“I try not to be a know-it-all when it comes to them, but it’s hard. They were filling out their schedules the other day and I just wanted to be like ‘oh you should take this class, I did it,’” Campbell said.

While having siblings can bring challenges, Campbell believes she owes her character to being an older sibling.

“It’s different how people without siblings are, versus people with siblings. I think you learn different skills at a young age, [like] having to share with your sister, or learning to communicate,” Campbell said.

Similar to Campbell, Landon said he is grateful to have his older brothers and their examples to help direct his life.

“It’s nice; I wouldn’t have chosen to grow up any other way. I think it’s always a good thing for people to grow up with siblings and someone to look up to,” Landon said.

Reflecting on his experiences, Landon also said that if he did not have his two older brothers, he would be less motivated but also significantly less stressed.

“I think the advantage [my brothers] didn’t have is that I know what to look for. I know what to do because I saw them do it my whole life,” Landon said. “But also if I didn’t have [that pressure], I feel like it would be a lot easier to walk through these halls.”