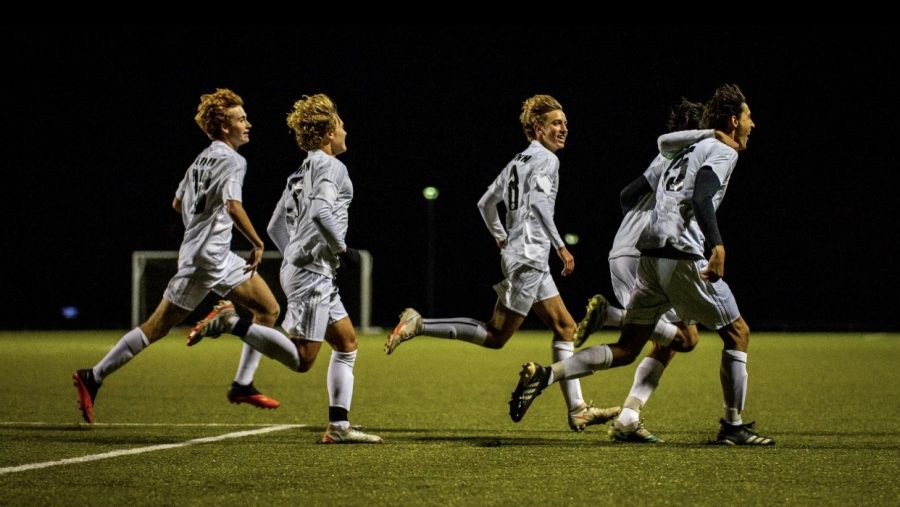 After finishing the regular season with a 5-10-1 record, the Huskies came into the playoffs as the 13 seed in the 6A East region. Playing against the fourth-seeded Olathe South Falcons, senior Joseph Rahto said the team was aware of their underdog status but used it as motivation.

“I think we came in wanting to win more because we were the underdogs. We wanted to make a statement by coming out strong and getting a win,” Rahto said.

Junior Sam McIntosh agreed with Rahto and added that he believed the team wouldn’t have played as well if they were favored to win.

“I think being the lower seed helped us because if we came in as a higher seed we would’ve thought this was an easier game than it was and wouldn’t have played as well,” McIntosh said.

The Falcons got off to a quick start, scoring a goal just over five minutes into the game. The score would remain the same until junior Ricki Li found the back of the net off a free kick, tying the game 1-1. McIntosh said Li’s goal gave the Huskies motivation as they went into the second half.

“I think Ricki’s goal really helped us because I think without it we wouldn’t have had the energy and confidence that we did in the second half,” McIntosh said.

During the halftime speech, Rahto said Pollack told the team if they move the ball around and not force anything they will score more goals.

“[Coach Pollack] told us to just focus on our own game, do what we do, pass the ball around and not force anything and the goals would eventually come,” Rahto said.

The Huskies found themselves trailing once again after Olathe South scored off a free kick with 16:59 remaining in the second half. However, the Huskies would respond quickly as with 15:18 remaining in the second half, sophomore Holden Jayram delivered a ball to the front post on a corner kick to senior Joseph Rahto who headered it in to tie the game at two goals apiece.

The goal was Rahto’s first of the season and he said he felt like it couldn’t have come at a better time.

“It felt great. It was my first goal in a varsity game and for it to come in the playoffs and tie the game makes it even better,” Rahto said.

The score remained tied, 2-2, for the remainder of the second half and the Huskies and Falcons entered overtime. Head coach Brian Pollack said despite the team not playing as well as they would have liked in the first half, they did a good job bouncing back in the second half.

“We didn’t play a good first half honestly. We talked about playing our game of one or two touches and when we did that in the second half and overtime it worked well,” Pollack said.

Northwest and South remained deadlocked at 2-2 throughout the first and second overtimes. Three minutes into the third overtime, senior Ryan Masterson found McIntosh on a long through ball over the top of multiple Falcons’ defenders. McIntosh took a couple dribbles before delivering a strike to the far post, scoring the game-winning goal for the Huskies.

After scoring the goal, McIntosh said he initially didn’t know what to do, but he ran over and celebrated with the fans after sending the Huskies to the regional championship.

“Honestly, after I scored, I was a little surprised and didn’t know what to do, but I finally ran over to the student section and celebrated with them which was fun,” McIntosh said.

Pollack said McIntosh was very deserving of the goal and it was a great way to end the game.

“It’s only fitting because [McIntosh] does all the little things and provides for everyone else so every once in a while he needs to eat himself, and it was just a great way to end it,” Pollack said.

With the win, the Huskies advance to the regional championship where they will take on Shawnee Mission East on Thursday, Oct. 28 at 6:00 at the Shawnee Mission Activity Complex. 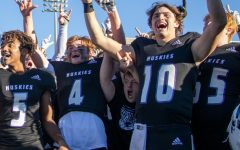 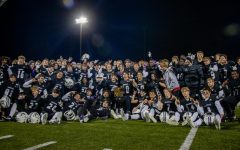 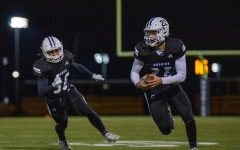 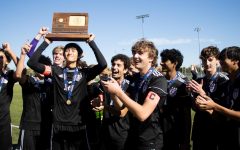 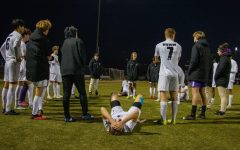