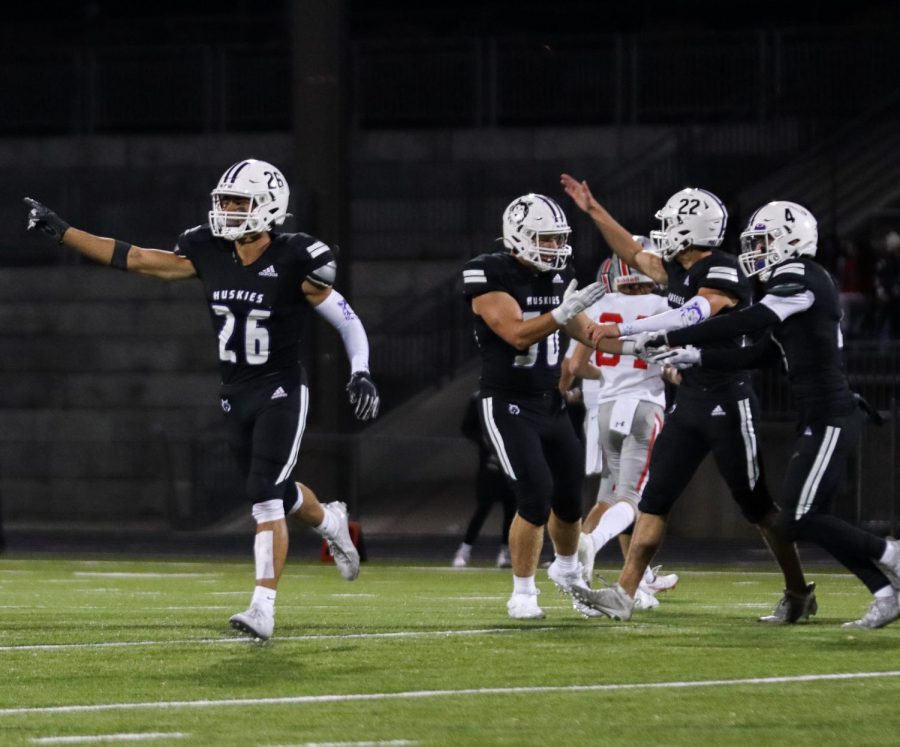 After last week’s loss to St. Thomas Aquinas, senior quarterback Mikey Pauley said the team put in hard work all week to prepare for the game against Blue Valley West.

“We had a great week of practice, everyone’s been locked in all week, physical at practice, and just focused on our opponents and didn’t take them lightly,” Pauley said.

Pauley scored the first touchdown of the night with 3:03 remaining in the first quarter. By the end of the first half, the score would not change, with the Huskies leading the Jaguars, 7-0.

Head coach Clint Rider said West did a good job in the second quarter stopping Northwest’s offense, but coming out of halftime, the Huskies were able to gain some momentum.

“[After the second quarter] we capitalized on a couple drives, where in the second quarter we kind of had been backed up a little bit. It made it kind of tough with the things [Blue Valley West] was doing,” Rider said.

It was not until there was 5:50 left in the third quarter, when Pauley scored his second rushing touchdown, making the score, 14-0.

Shortly after, senior Gavin Biancalana intercepted a pass and the Huskies took possession of the ball.

Then, with 56 seconds remaining in the third quarter, Pauley scored another touchdown, making it his third rushing touchdown of the night. BVNW was now leading BVW, 21-0. This would be the final score of the game.

Pauley said scoring his three touchdowns on his senior night made each one even more special.

“It’s probably the best moment I’ve had playing as a Northwest football player. Just getting our win on senior night, the last regular season game and it was [to win the] EKL. And also keeping the number one seed going into the playoffs, it was huge,” Pauley said.

The team’s win led to them winning the EKL Championship. The Northwest football team had not won EKL for 16 years. Senior linebacker Drew Ranallo said it was a big victory for the team.

“It is unreal. We haven’t done it since 2005. It’s been building for the last four years, everybody has worked so hard for it so I’m glad we got it,” Ranallo said.

Rider said he was very proud of the team and winning the game was an awesome feeling.

For the first time this season, the Huskies recorded a shutout. Rider credited defensive coordinator Kollin Ahern for his ability to fire up and prepare the defense.

“[Coach Ahern] did a really good job getting his guys going. They flew to the ball and that’s an incredible thing to hold that quality of a team to no points,” Rider said.

Ranallo, who contributed two sacks and seven tackles on defense, said he really wanted this win. He said the entire team played great and deserved the win.

“Our defense played phenomenal, our offense stepped it up in the 2nd half, and I love those boys for it. It was the greatest feeling in the world,” Ranallo said. “We put a great week of practice together and I think we were just ready. We came out, we were hungry and we wanted it more.”

Moving into the postseason, Pauley said he plans to work hard to get ready for any opponent the team faces.

“We’re not going to take any opponent lightly. We’re going to focus week by week and get ready to play every week no matter the opponent,” Pauley said.