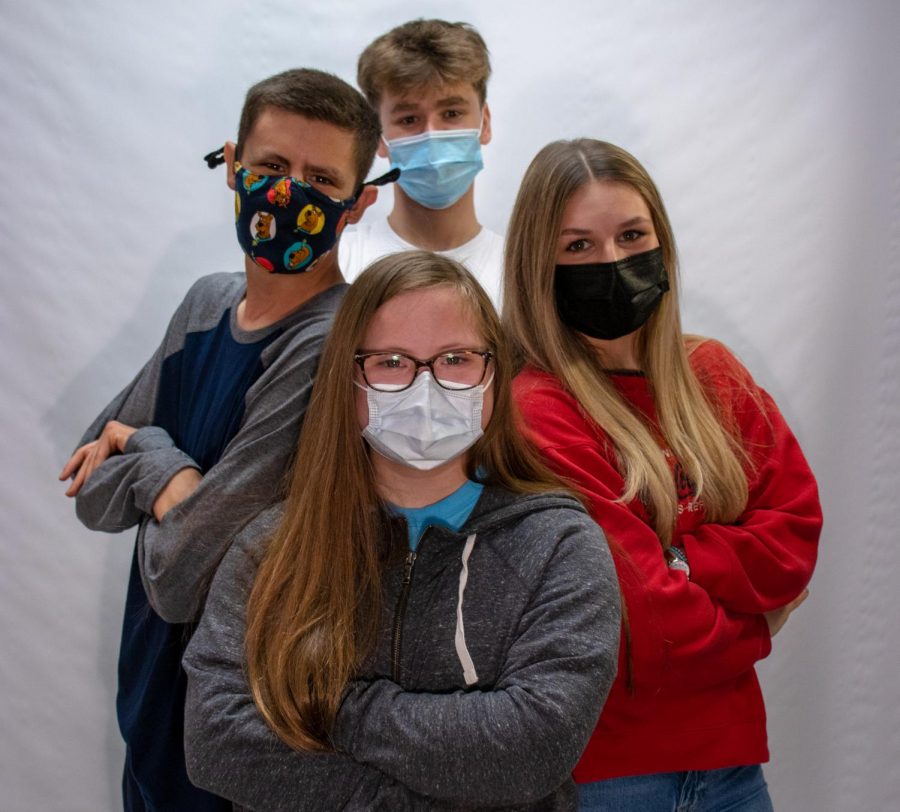 Juniors Elijah Henderson and Hudson Henzlik, along with seniors Ainsley Aadland and Regan Poppen, spend time together in Connections class.

Students find ways to involve themselves in high school despite the challenges presented in their lives.

Under the Friday night lights, senior Ainsley Aadland dances for the roaring crowd, alongside the BVNW dance team, The Pack.

Aadland is involved in a variety of school activities including Special Olympics, Unified Sports and the dance team. Aadland, who has Down syndrome, has been a part of the dance team for four years.

Mandie Aadland, Ainsley’s mom, said The Pack has been a huge activity for Aadland throughout high school. Mandie explained how this team has allowed Aadland to be a part of something within her school.

“I think that’s a part of high school, to feel like you matter, that you get to be a part of a group, and there is some identity there and some pride there,” Mandie said.

Aadland shared her experience and favorite parts of being on the dance team.

“It’s really fun to dance [with] my friends. I have a best friend on the team, her name is Regan,” Aadland said.

Senior dance team captain Regan Poppen has known Aadland since the two were in elementary school. Poppen explained how she has seen Aadland devote herself to performing well, alongside the dance team.

“Ainsley works really hard. She likes to practice a lot on her own, and in her garage; she loves performing for her family and her friends, and it’s really cool to see how involved and how much she cares about the dance team,” Poppen said.

Poppen is also a peer mentor for the students in the Intensive Resource class. Peer mentors are typical peers who assist students with disabilities during their classes. Poppen shared her experience in peer-mentoring and how it has impacted her.

Peer mentoring, Poppen said, has impacted her by building strong friendships with Aadland and other students with special needs, as well as educating Poppen on important life lessons that she would not have otherwise learned.

“Usually when someone has abilities that are different from yours, your instinct is to handle them, and just kind of give them whatever they want and bend the rules; but one of the lessons I’ve learned is that boundaries and saying ‘no’ is also really important,” Poppen said.

Junior Hudson Henzlik is another peer tutor in rooms 101 and 102, the Intensive Resource classrooms. He helps out in the Connections class, which takes place during fifth hour, by helping students with disabilities improve their social skills. Henzlik has been a peer mentor since middle school and said he plans to continue peer-mentoring throughout high school.

“One of my favorite parts about [peer-mentoring] is lunch or activities, getting to know [the students], and then introducing them to my friends, so then everyone knows them and they get more involved,” Henzlik said.

Intensive Resource teacher Robin Hodges works with students who have special needs. Hodges described the Intensive Resource classrooms as a place where students with disabilities learn how to be as independent as possible, by practicing functional life skills.

“Every student in our program is capable and many of them will be able to live independently. So we try to foster that in everything we do as far as goals and lessons,” Hodges said.

According to Hodges, the 26 students in Connections are like a family. Along with having a supportive environment, Hodges said rooms 101 and 102 are a joyful place to be.

“We have the happiest room in the entire building,” Hodges said.“You come in and it’s filled with joy and our students are excited to learn.”

Hodges described Aadland, who is a part of the Connections class, as an artistic and creative individual.

“She’s quiet in the classroom, but if you give her any project [where] she can express herself with art, she loves it,” Hodges said.

Junior Elijah Henderson is a student in room 102 as well. Henderson has Mosaic Trisomy 18 which is a rare chromosomal disorder, according to math and engineering teacher Karen Stohlmann, Elijah’s mom. She explained how her son experiences his surroundings.

“Elijah experiences the world with the volume turned way up. So every emotion is bigger to him than it is to you or I. Every sound is bigger, every texture is bigger. I think sometimes we forget that,” Stohlmann said.

Elijah does sometimes face a lack of inclusion, Stohlmann said.

Despite the challenges he has faced, Henderson is an optimistic and hardworking individual, Hodges said.

“He has a really good sense of humor, and he’ll do something funny and look at you like ‘are you gonna laugh or not?’” Hodges said.

Henderson participates in Special Olympics, Unified Sports and the Howlin’ Husky Marching Band. He is a percussionist in the front ensemble and marches in the drumline for the band. Henderson shared his favorite aspect of being in the band.

“Well, I like [playing] the cymbals and the drums,” Henderson said.

Daniel Kirk, the band director, explained how Elijah works on team goals with the band.

“He works toward a common goal, he works as a part of the team. He works on goals outside of himself,” Kirk said.

Kirk also said Henderson has contributed to the band.

“He brings this sense of joy and spirit to [the band]. He’s never in a foul mood, and there is something delightful and refreshing about that,” Kirk said.

In addition to the band, Henderson has a job at Price Chopper. Stohlmann shared her concerns with the employment options for her son.

Henderson got his job through the Career Development Opportunities Program (CDOP). This program, Hodges said, allows students with special needs to have a foundation for school-to-work transition. Aadland is also a part of CDOP, and works at Beauty Brands.

“It’s so much fun; I organize and [put on] stickers,” Aadland said.

Sophomore Isabella Shepker has a physical, rather than intellectual, disability. Shepker is blind with little vision remaining in her left eye. She has a condition called Peter’s Anomaly which causes thinning and clouding of the cornea. Shepker also has a prosthetic right eye.

Shepker said some of the things she does differently at school to accommodate her disability include using technology in order to see.

“I have to work on technology instead of on paper, like everyone else does, and I have to read by audio or else my eyes would get really tired,” Shepker said.

Shepker uses a cane for mobility. She said it allows her to navigate without running into obstructions.

Isabella’s dad, Matt Shepker, said he would like other students to know that unsolicited contact can be startling for someone who is blind.

“Being grabbed or touched without any kind of knowledge that it’s coming is a big thing, because if they can’t see it coming, [and] all of a sudden they’re being grabbed, they’re going to freak out,” Matt said.

Shepker said being blind does not hold her back from doing the things she loves, such as coding and playing games on her electronics. The only thing that is different for her, Shepker said, is the need to have an oversized computer screen in order to see.

Matt said Shepker is learning code as well as 3-D modeling on her computer.

“She’s learning to write in two different programming languages right now, which is a big undertaking for anybody,” Matt said.

Shepker wants people to know students with disabilities are not different from their typical peers.

“We aren’t any less human just because we have disabilities, so we should be treated like everyone else,” Shepker said.

“Sometimes it’s easy to make folks with disabilities more of a pet than a friend. And that’s kind of awful. So, knowing that other people treat them with friendship, versus as a token, is pretty important,” Stohlmann said.

Stohlmann said she believes it is important to include everyone despite their differences.

Henzlik added to this by encouraging all students to be kind to their peers who have disabilities.

“All [the students] feel the same things we do, and I think it’s important to include them,” Henzlik said.

Hodges agreed with Henzlik and shared her advice for how Northwest should view students with disabilities and their potential.