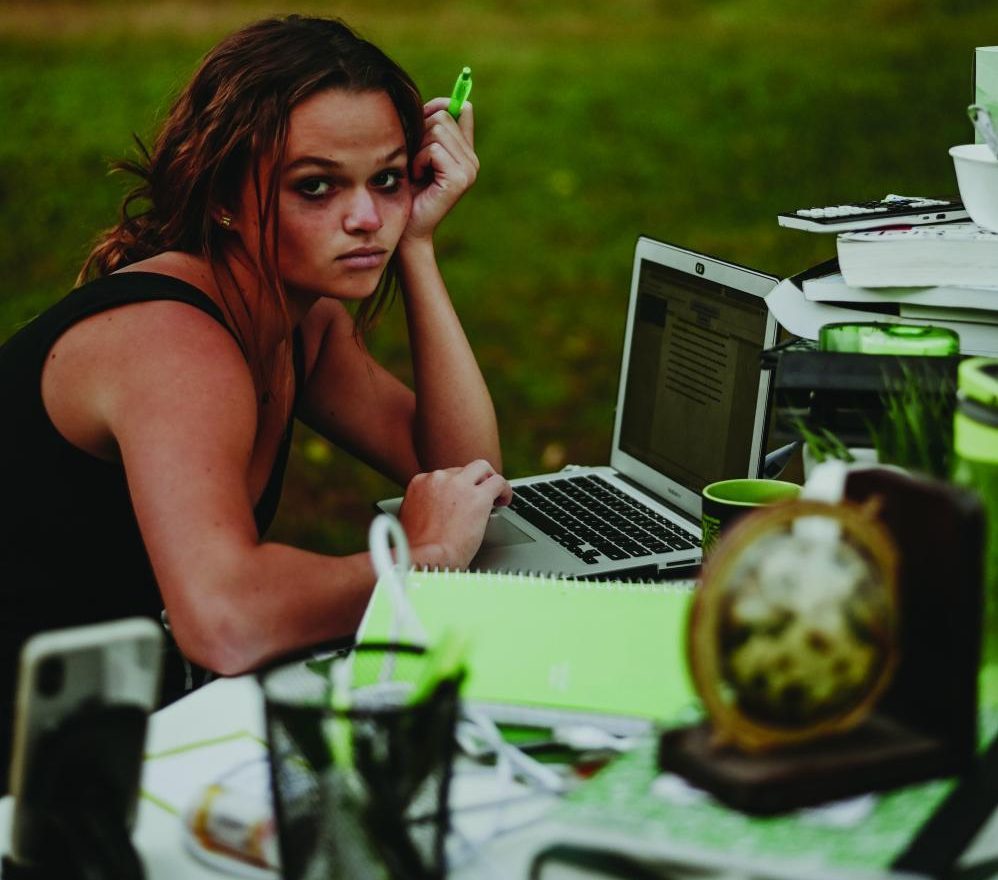 Students and staff have attributed an increase in stress levels to various factors that come alongside the learning models this year.

Senior Ethan Hunt wakes up five minutes before class starts, attending classes alone from his bed, struggling to grasp concepts with the few resources available at home. Hunt said this has been reality for him and other Blue Valley Northwest students this school year.

In March, the Blue Valley School District switched to online learning in an effort to slow the spread of COVID-19. At the beginning of the 2020-2021 school year, the Blue Valley School District Board of Education created their own gating criteria to be evaluated every two weeks to determine what the learning model will look like. Following the Aug. 18 District BOE meeting, Superintendent Tonya Merrigan announced that middle and high school students would learn virtually for the first four weeks of school.

According to sophomore Aspen Larson, the unprecedented start of this school year has caused an increase in stress and anxiety across the BVNW community.

“I’ve talked to a lot of people on the phone and most people didn’t like online learning. No one knew what was going on,” Larson said. “It really raised my stress a lot because I felt like I didn’t know what I was doing.”

Senior Sravya Narahari said she has personally experienced struggles with scheduling and finding time in her day for all seven of her classes. She said the first two weeks were very stressful, simply because she was trying to arrange her schedule in a way that would accommodate all of her classes. She said it was particularly difficult because this was not something she would have to worry about during a normal school year.

“My stress definitely has increased since school started,” Narahari said. “When you’re not doing stuff for six months straight, it’s super easy to feel like what you’re doing is pointless or to not have motivation to do anything.”

Whether it was seeing a friend in the halls during passing period or sitting down for Husky Halftime with a table full of friends, students are not receiving the same social interaction from school as they have in years past. Narahari said not getting to
see her friends on a daily basis has negatively affected her mental health.

“Humans are social beings, so we’re not meant to live in isolation,” Narahari said.

Larson attributed student’s increase in stress levels to the social interaction that virtual learning fails to provide. She said
being around other people is what helps to relieve her stress, anxiety and depression.

Hunt said, “It’s been upsetting to not see all of my friends at school or to not get that normal interaction we took for granted.”

Hunt said sitting in the same place all day, every day at home for school contributed to the mental health issues students are facing. Students were encouraged by teachers and administrators to set up a dedicated work space to complete all of their assignments during virtual education.

“Not being able to get up and walk around the building like we would during passing periods is hard because instead of walking in the halls, you just click on a Canvas tile,” Hunt said. “You don’t get the ability to move around or see friends.”

Not only have students voiced their concerns for their own mental health, but parents, teachers and healthcare professionals have also expressed their worries.

Humans are social beings, so we’re not meant to live in isolation.”

Prior to the start of school, many parents and students voiced their opinions on virtual learning at the BOE meeting on Aug. 18. Pediatrician and BVNW parent, Christine White offered her opinion on the issue.

“As a pediatrician, I know the risks of Coronavirus,” White said. “I know that it’s risky for a small subset of people. To punish all these kids, in my medical opinion, is inappropriate and it is unethical.”

Since the beginning of the COVID-19 outbreak in March, both White and fellow pediatrician, Deborah Winburn- Antovoni, said they have seen an increase in the number of children seeking medical attention for mental health issues. Both doctors added that since online schooling has started, that number has continued to increase. Winburn-Antovoni said the average number of children she is treating for mental health issues has doubled.

“One day, I saw 24 kids in my clinic, which is a normal day for me,” White said. “Six of them came in specifically for new onset anxiety or depression because they were not allowed to go back to school in person.”

Winburn-Antovoni attributed the increase in screen time that comes with online learning as a factor of the mental health issues she is seeing. She believes kids are feeling trapped in their screens which is taking the hope out of learning. She said Zoom is not the same as 3-D interaction in a classroom.

White also recognized that while the majority of students will handle online learning just fine, she said there are still 15 to 20 percent of students who will struggle with mental health issues because of the circumstances.

White described the two groups of students that she has seen come into her office throughout online learning. She said the first group is composed of the students who are self-starters, organized and type-A, who will be just fine regardless of what the learning model looks like. The second group of students are those who need to be held accountable, do not connect well with Zoom and need one-on-one interaction with teachers and classmates to succeed.

“Those kids are going to eventually just disconnect from this,” White said. “They’re going to stop logging in. They’re going to get
frustrated and their grades are going to fall. Some of them will become very anxious because they know they should be doing better, but they don’t know how to.”

BVNW gifted education teacher Sally Noltemeyer said teachers and staff members have their own set of difficulties to navigate. Noltemeyer said she has been struggling with the fact that she does not feel like she is able to provide an adequate education to her students via Zoom.

“I’ve been taking advantage of as much professional development as I can, and I still don’t feel like I’m learning enough to provide the quality of education that I feel like my students deserve, but I’m doing my best to keep up with it,” Noltemeyer said.

Noltemeyer added that she is not the only teacher who is feeling this way.

“It’s the same fiddle being played in different tunes,” Noltemeyer said. “Everyone has the same stress right now. We’re all so lonely and so frustrated.”

Noltemeyer said there are simple ways students can help support their teachers during this time of online learning, despite not being able to see them in the classroom every day.

“Use the chat feature [on Zoom],” Noltemeyer said. “Send private messages to your teachers saying ‘You’re doing a good job, this makes sense!’ because they see it and it helps them to know that how they are teaching is working.”

The Blue Valley School District high schools switched to a hybrid learning model on Oct. 5. Allowing half of the student body to be in the school building at a time.

Senior Ethan Hunt said the hybrid learning model has caused a reduction in stress and anxiety levels across the student body. He attributed this reduction to the human interaction that hybrid learning provides, both with teachers and peers. Hunt said getting to see people in the halls and in classes has made him enjoy school more so far this year.

“I think I’ve been less stressed now because I learn better when the teacher is teaching in front of me,” Hunt said. “I think it is more efficient and easier for students to learn this way.”

Narahari attributed her reduction in stress levels to the routine that she has been able to establish with hybrid learning.

“I feel a lot more like myself,” Narahari said. “The interest I have toward learning and my motivation to get assignments done is a lot better. Hybrid has improved my stress levels and I am able to manage my time better.”

While these students and staff members believe the hybrid model is an improvement from online learning, they agreed it is still not the ideal school situation.

Noltemeyer said she does not believe hybrid is as efficient of a learning system as full-time, in-person learning is for students.

“I don’t think we’ve figured out how to do it right, but I think it could be,” Noltemeyer said.

Larson and Noltemeyer both said they have noticed that students are receiving more school work than in years past.

“I feel like people, in general, seem a little calmer and more rested, but I think the amount of work that any average student is dealing with right now is overwhelming,” Noltemeyer said.

In order to minimize the negative effects of a heavy course load on students, Noltemeyer said teachers need to be more understanding of the circumstances. She added that teachers need to think as a whole group in terms of the effect they are having on the mental health of students.

Narahari recognized the fact that having up to half of the student population back in the building at once increases health concerns.

In order to maintain the early success of hybrid learning, Hunt said we all need to continue to do our part to keep everyone safe. He said this includes wearing masks, sanitizing frequently and following the one-way hallway directions.

As a BVNW community, Noltemeyer said, “We need to adopt flexibility as our new motto. We have to let go of what used to be, and we have to embrace that there is something new coming.”