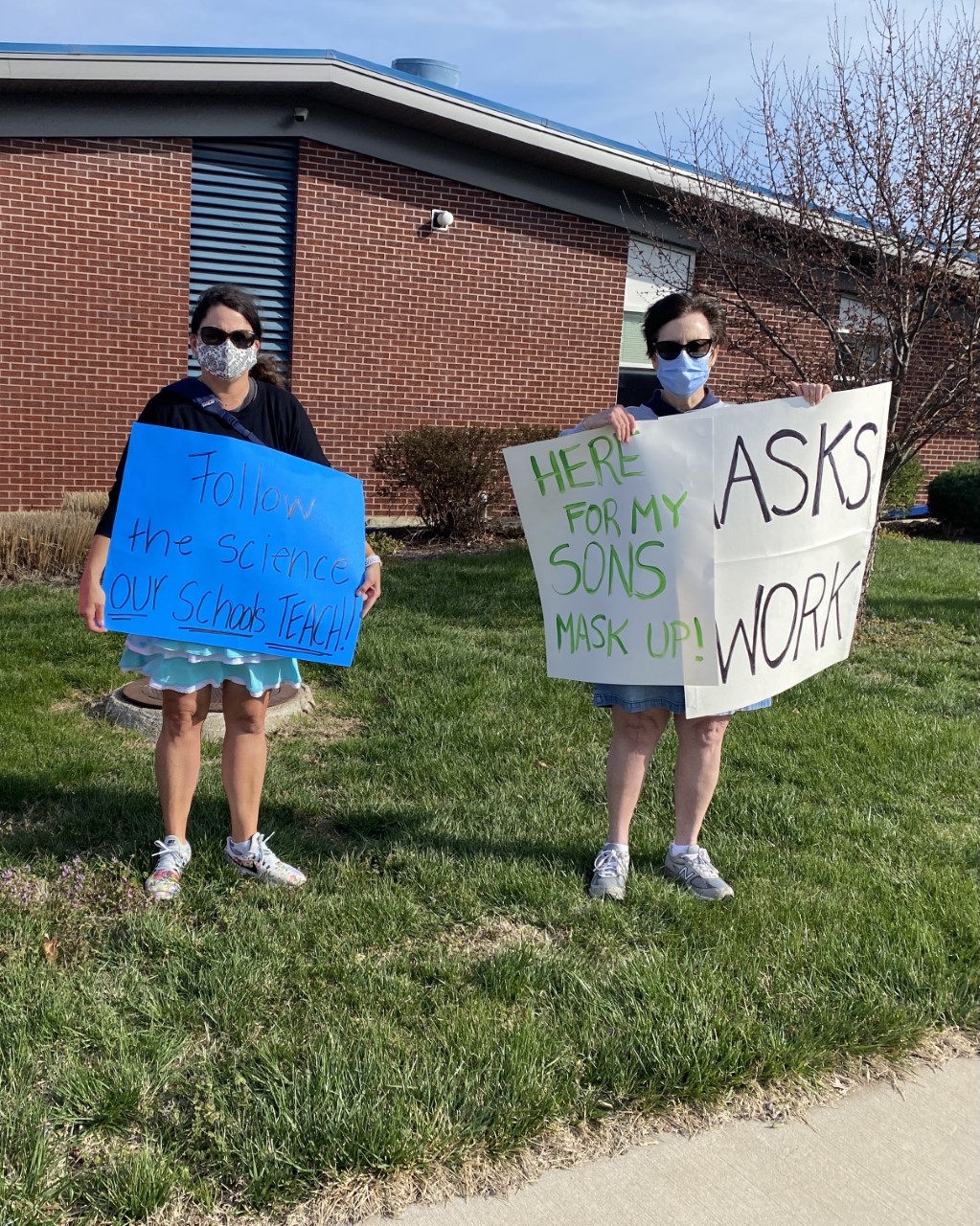 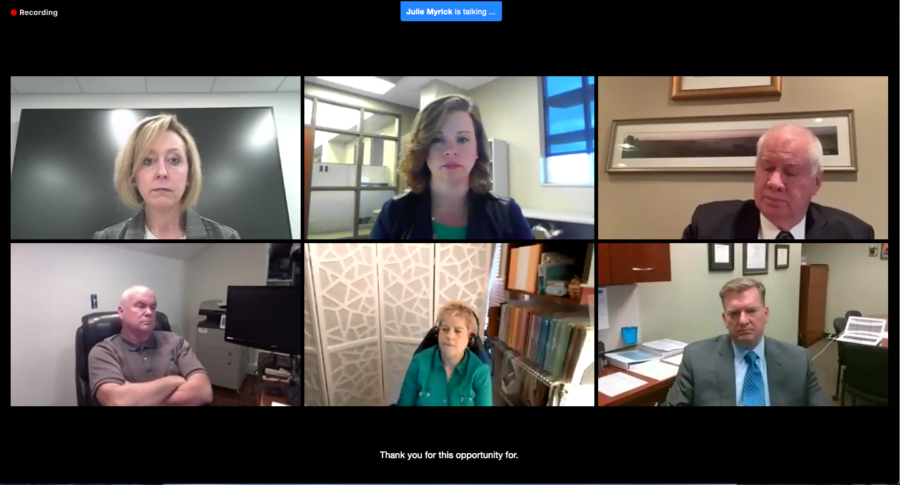 BREAKING 4/8/21 8:32 p.m: The Board of Education will maintain the mask requirement on the basis that it is the least restrictive means to respond to the state of disaster emergency. The Board dismissed the hearing request on the basis that the complainants lack standing or they were not timely submitted under Senate Bill 40.

The Blue Valley School District held a hearing virtually this morning at 7:30 regarding grievances with the mask requirement. This hearing is now mandated by Senate Bill 40 which was recently passed to allow parents to file a grievance on COVID-19 mitigation strategies of a school district.

The bill allows employees, students and guardians who are unhappy with COVID-19 interventions to request a hearing. Further, if the complainant is dissatisfied with the hearing decision, that person can file a civil action in district court. In the case of the mask mandate, if the court ruled against the mitigation strategy the district could be required to remove the mask requirement.

The parents who brought forth grievances were Laura Klingensmith, Julie Myrick and Linus Baker. Klingensmith and Myrick did not directly mention the age nor where their children go to school. Baker mentioned an elementary school aged grandson. The hearing was done entirely through Zoom.

The hearing was mediated by Roger Warren. Warren is an attorney with Sanders Warren & Russell, LLP who specializes in mediation services. Warren was contracted by the Board of Education to serve as an impartial hearing officer.

The first party to air a grievance was Klingensmith, however, she asked for a continuance as she said she has not received legal counsel. Klingensmith chose not to proceed and was told by Warren that he cannot guarantee her an opportunity to present in the future since she was given the opportunity today.

Klingensmith said she was upset about the hearing being canceled the day before due to the unmasked individual and was concerned with how the district was handling the hearing.

Next to present was Myrick. Myrick also requested a continuance since she did not have legal counsel but decided to proceed nonetheless. Myrick said she was denied the right to due process since the hearing did not occur within 72 hours of her filing a grievance and said she felt denied the opportunity for a face-to-face hearing.

To this, Melissa Hillman, general counsel for Blue Valley, said this hearing was not the district’s first option but would be the most efficient way to hold it due to the events of the previous day. Hillman also said the district is not ignoring the right to counsel.

Myrick continued and said she is not anti-mask and said “I believe masking can be beneficial.” However, Myrick said kids chew masks, grow bacteria on them and it is unknown what the long-term effects of this might be.

Myrick also said her children have shown negative reactions to masking.  Myrick said her oldest son gets headaches and his pulmonary function has decreased since he has asthma. Myrick said her younger son who has epilepsy gets anxiety from wearing a mask.

It is important to note that children with medical conditions can be exempt from wearing a mask if recommended by a doctor. This is allowed under the Americans with Disabilities Act.

Myrick said that masks create communication barriers and have led to a drop in test scores for her kids. Myrick added that data does not support that masking helps stop the spread and the case numbers are the same in schools with and without a mask mandate, however she did not cite any specific sources. Myrick also suggested this is not a decision for the district to make.

“Parents should be making health care decisions for our children, not our school board,” Myrick said.

Baker spent the first 18 minutes of his allotted 30 minutes to raise concerns about how the hearing was being run improperly. Baker said he should be speaking to the Blue Valley Board of Education rather than Warren who the District hired to do the hearing. Warren will report his findings to the Board following the hearing.

Similar to Myrick, Baker said his grandson has special needs which need to be accommodated by the District, allowing him to not wear a mask. Baker also asked his wife to be exempt from having to wear a mask and said the district would not make any religious exemptions for masking which he found unconstitutional.

Hillman then spoke on behalf of the district and said the mask requirement should be continued. Hillman said COVID-19 spreads predominantly through respiratory droplets which is why it is important to mask.

Hillman said masking is less restrictive than virtual education and there is no way to lessen mitigation without jeopardizing in-person school. Since news of the hearing broke, Hillman said the district received 90 emails from parents, 78% of those emails were parents supporting the mask requirement, 22% were against it.

Hillman then brought forth her first witness, Mark Schmidt. Schmidt is the Assistant Superintendent of Special Education Services. Schmidt said preventative measures like masking were instrumental to being able to get students back in person and he knows of no way they can lessen these restrictions. Schmidt said if the schools removed the mask requirement the entire school could easily be sent into quarantine.

At this time Schmidt also confirmed that Baker’s grandchild is not currently enrolled in the school district.

Hillman next had a registered nurse and District Coordinating Nurse Tara Ascher witness. Ascher said the School District relies on guidance from the CDC, Johnson County Department of Health and Environment and Children’s Mercy Hospital. Ascher said masks are necessary for the remainder of the school year and without them the District would be forced to do mass quarantines anytime an individual tested positive.

The District’s final witness was Dr. Andrew Demo who is a board certified pediatrician. Demo echoed that masks are the least restrictive measure the district can take when it comes to COVID-19 mitigation.

Hillman concluded her time and Baker proceeded to cross examine Mark Schmidt. Baker asked Schmidt questions about his grandson’s Individualized Education Program (IEP) but Schmidt refused to answer due to the Family Educational Rights and Privacy Act (FERPA). Baker asked how his grandson could have an IEP but not be considered enrolled in the district since these services are only available for students who attend Blue Valley Schools.

Tensions were high in the hallway outside of the Board of Education room where the hearing was scheduled to take place. After people were admitted to the room, one individual refused to wear a mask forcing everyone to evacuate the room and be readmitted only if wearing a mask.

The unmasked individual eventually left, but the district decided the hearing would be rescheduled virtually. Groans filled the hall with mutterings of “this is so Blue Valley.” People voiced their concerns as they had lost their opportunity to witness or testify.

One of the people attending the hearing was Dave Trabert, Chief Executive Officer of the Kansas Policy Institute. Trabert does not have students in the Blue Valley School District but said he came as this was the first hearing he knew of that pertained to someone exercising their right to file a grievance under Senate Bill 40.

This hearing is now mandated by the recently passed bill when a grievance is filed by parents on COVID-19 mitigation strategies of a school district. The bill allows employees, students and guardians who are unhappy with COVID-19 interventions to request a hearing. Further, if the complainant is dissatisfied with the hearing decision, that person can file a civil action in district court. In the case of the mask mandate, if the court ruled against the mitigation strategy the district could be required to remove the mask requirement.

Trabert said he was disappointed when the hearing was canceled and said it appears as an attempt by the district to avoid letting parents exercise their rights under the law.

Trabert said Senate Bill 40 is a big step forward and it encompassed appropriate changes needed for COVID-19, however this is not a universal feeling.

Colleen Knight, a retired teacher from the Olathe School District who lives in Blue Valley, stood holding two signs encouraging mask wearing. Knight was a part of the group protesting outside of District Office in support of the mask mandate and said the recent legislation could be detrimental to schools.

“I feel that we are going to be stripping our schools of good talent if we continue to attack them which is what the Kansas legislature and representatives like senator Kellie Warren have done,” Knight said.

BVNWnews reached out to Senator Warren for a comment but has yet to receive a response.

Knight stood next to BVNW parent Julie Passett who was also there to support the mask mandate. Passett said masks are one of the few things the district is able to help mitigate since you can’t effectively socially distance in a school of 1600.

“We need to keep our kids safe,” Passett said. “We can’t risk 36 more days of school without masks. Can we just finish the school year?”

One Blue Valley parent protesting, Jennifer Levinson, said the issue surrounding masking is really personal to her. Levinson recently lost her father to COVID-19 after both her parents were infected with the virus.

“To a lot of people it’s just a number, it’s x percent, but that x percent was my dad,” Levinson said. “He did all the right things and he should be here.” 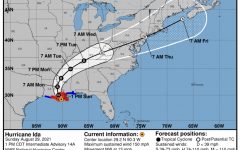 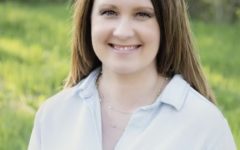 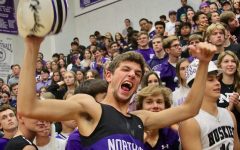 Plans underway for BVNW to get a new main gym 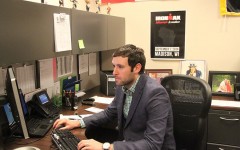 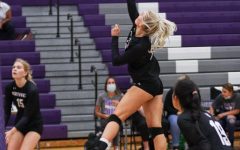 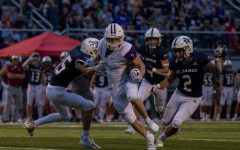 Huskies dominate on both sides of the ball, defeat Thunder, 47-10. 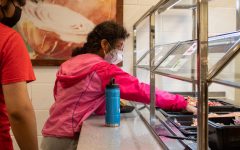 Husky Halftime is not just a fun privilege. It is important for our students. 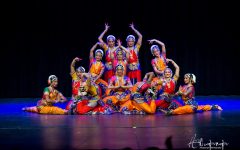 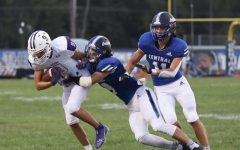