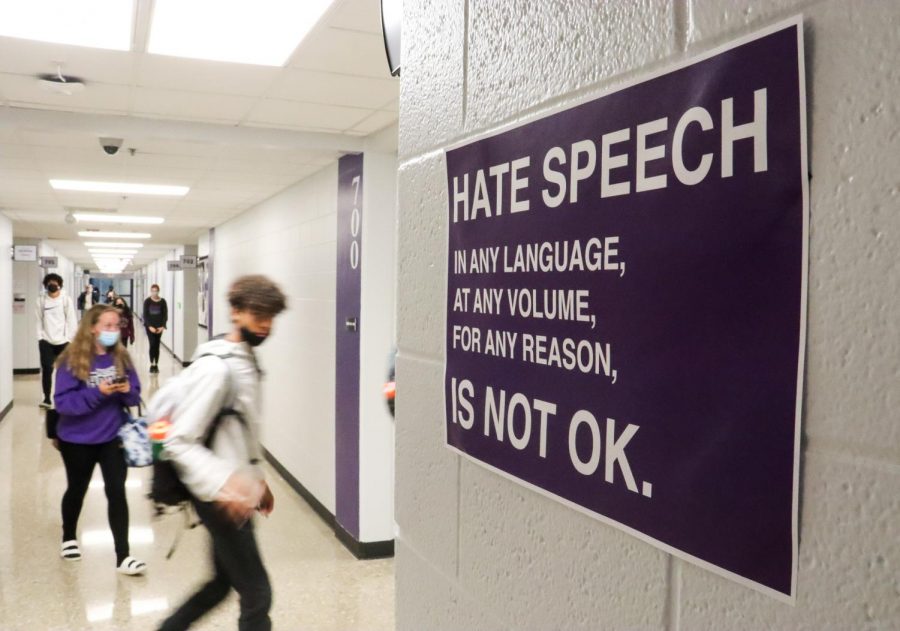 A sign addressing hate speech is posted outside a classroom door in response to a racial slur in a male restroom, Oct. 28.

A student discovered Monday a racially charged slur etched on a stall in the 200 hallway boys bathroom, posted it to social media, and after seeing it on social media, another student made a teacher aware of the situation.

It was reported to the administration soon after, resulting in the immediate closure of the bathroom.

English teacher Kyle Farrington sent an email to the entire Northwest staff last night, encouraging the faculty to talk about the harm of hate speech.

“I wanted to tell other teachers how I wanted to act on it and invite them to do the same, so we could get enough critical mass moving in a positive direction,” Farrington said.

He sent the email because he said he was concerned about how the community would feel if the racial slur was not addressed with students.

“It scared me a little bit because if we didn’t talk about it, if kids were not allowed to talk about it, then we would become complicit in that vandalism,” Farrington said. “Kids and staff members who felt like it was directed at them, [I was worried] that those people wouldn’t feel supported by the staff and community.”

Principal Amy Pressly confirmed the incident. Farrington said he could not speak to how administration is handling the incident, as he is unaware of all of the steps included in this process.

“Administration has a lot of rules and laws they have to follow,” Farrington said. “I am sure they have reasons for handling it the way that they did, and I do not know any of those things.”

In response to Farrington’s email, a group of teachers came together this morning to collaborate on an email to send to the Northwest staff, highlighting ways to help staff members talk about incidents of hate and racism with their students.

Eigenberg, who found out about this incident from Farrington’s email, said he spoke to his fourth-hour freshman honors English class and said he addressed the talking points from today’s email.

“[I did not] ambiguously address [what] has happened, [I] addressed that hate speech and hate language has no place at Northwest,” Eigenberg said.

Additionally, Eigenberg said his class discussed the importance of making sure this issue will not emerge again.

Pressly said the teachers’ emails were sent on account of students not taking this issue seriously.

“They were encouraging their fellow teachers to talk to students about it because to my understanding with talking to teachers is kids were laughing and joking about it, and that is what the teachers were upset about,” Pressly said.

In addition, Pressly said she knows teachers are upset for not being made aware of the situation and said she addressed it with them in a faculty meeting after school.

As for why the issue was not addressed with teachers earlier, Pressly said it is because issues such as these are not normal at Northwest.

Ultimately, Farrington and Eigenberg said they want to cultivate a supportive community, free of hate speech.

“I, like every other teacher here, loves the kids who go to school here,” Farrington said. “I want to teach in a building where students know they will be respected and cared for, and I want all staff members to feel that way as well.”