“In the Heights” celebrates culture and family 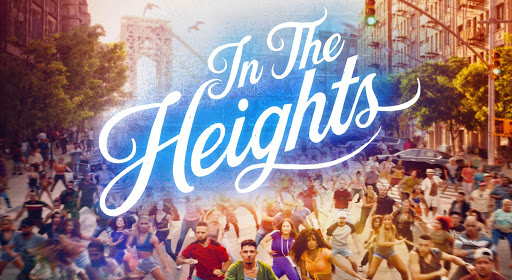 The first movie musical of the summer, “In the Heights,” has finally been released in theaters and on HBO Max. Set in Washington Heights, New York, this movie provides a perfect mix of music, drama and emotion. It showcases Anthony Ramos as Usnavi de la Vega, Melissa Barrera as Vanessa, Leslie Grace as Nina Rosario and Lin-Manuel Miranda as Mr. Piraguero.

Featuring a predominantly Latino cast, “In the Heights” follows a bodega owner named Usnavi, who dreams of returning home to the Dominican Republic to reopen his father’s old shop.

Near the beginning of the movie, Usnavi discovers that his shop has sold a winning lottery ticket; this finding spurs excitement and anticipation among the community.

Usnavi’s friend Nina returns to Washington Heights after experiencing a lack of community and having a racist encounter at her college.

This film adaptation of the Broadway musical also highlights the struggles that immigrants in the United States face. There is discussion of Usnavi’s cousin, Sunny, who is an undocumented immigrant and the challenges that he faces because of this status.

As expected, “In the Heights” incorporates a slew of well known songs from the Broadway musical, including, “When You’re Home,” “Blackout” and “Breathe,” all of which are beautifully done, capturing the audience’s attention and never letting go.

Although the movie features major moments and songs from the original musical, there are some plot points and songs that were not included in the movie. In the original version, Vanessa struggles with her mother’s alcohol dependency, but this part of Vanessa’s story was not covered in the film.

Including this aspect of the musical would have presented a great opportunity for the discussion of a topic that is not talked about enough, but the movie manages to tell the story beautifully despite this.

While this movie musical is full of humor, dancing and music, at the heart of this story is the Latino community of Washington Heights and the culture that they all proudly share. The portrayal of the relationship between Usnavi and his family is relatable and wholesome, making for a heartwarming movie.

The family element, moving songs and the emotional journey that this movie takes you on make this movie musical a must see.