Huskies pull away in second half, defeat Jaguars, 47-29 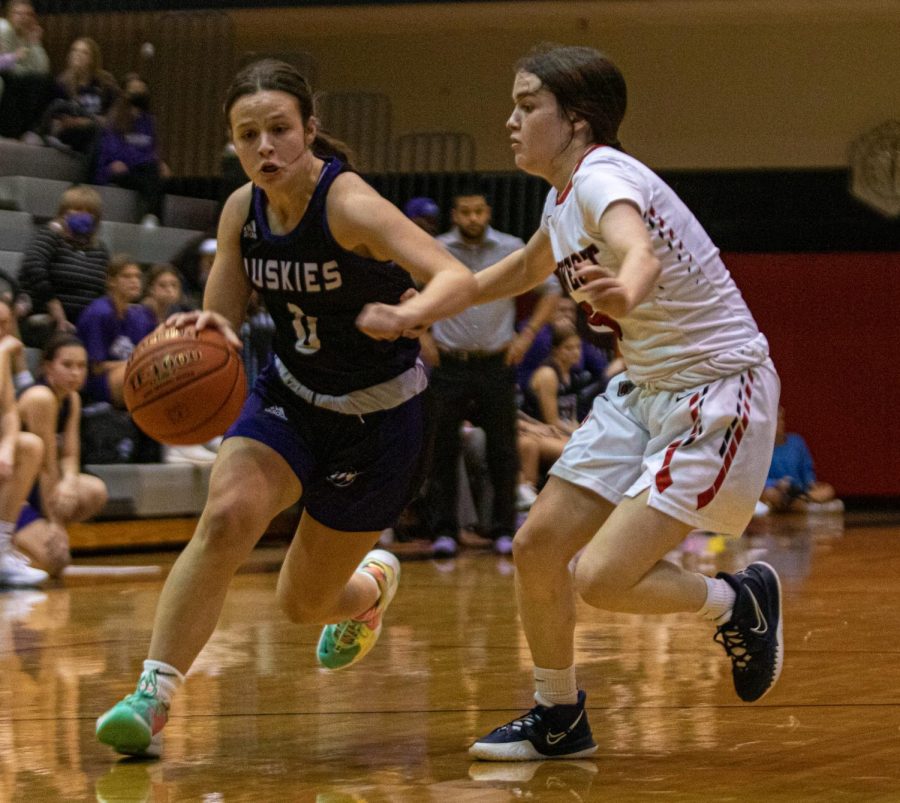 The girls varsity basketball team had a strong start in their game against Blue Valley West on Friday, Jan. 7. At the end of the first quarter, the Huskies were up 19-14. They continued to lead throughout the game, winning with a final score of 47-29.

Head coach Matt Shulman said he felt confident going into the game. He said the team had focused on improving their ball pressure which they thought would be necessary against West’s Lily Ba. However, the Jaguars’ leading player was out with COVID so they had to change their strategy.

“We had to change that up a bit but really [wanted to] get some pressure against them and make them turn the ball over as much as possible,” Shulman said.

Going into the game, sophomore Josie Grosdidier said she had a few things she was planning to focus on.

“I think we just wanted to work hard and [have strong] defense, and we needed to communicate well because they usually do a lot of screens and they can shoot well,” Grosdidier said.

In the second half of the game, senior Hayley Numrich had some shots that Shulman said helped the team build their energy.

“Hayley Numrich hit a couple threes in the second half that gave her some confidence and gave us some energy, some juice, that we needed. We didn’t have a lot of fire in the first half,” Shulman said.

Grosdidier agreed that Numrich was a major asset in the team’s victory.

“I would say, in the second half, Haley got quite a few steals and did really well on defense and one time during our press we got two [steals] in a row and I feel like that was a really strong point in the game,” Grosdidier said.

Although Shulman said there are many things the team needs to improve upon, he was proud of them for their aggressiveness.

“I think that we had a couple kids step up and play hard and play really well and do some good things to help when others didn’t so I was happy about that and again we were aggressive getting to the rim and I was proud of them for that,” Shulman said.

Northwest plays next on Tuesday, Jan. 11 in an away game against Barstow at 6:00 p.m.