The varsity football team improved their record to 3-0 as they defeated the St. Joseph Central Indians, 49-6, Sept. 17. 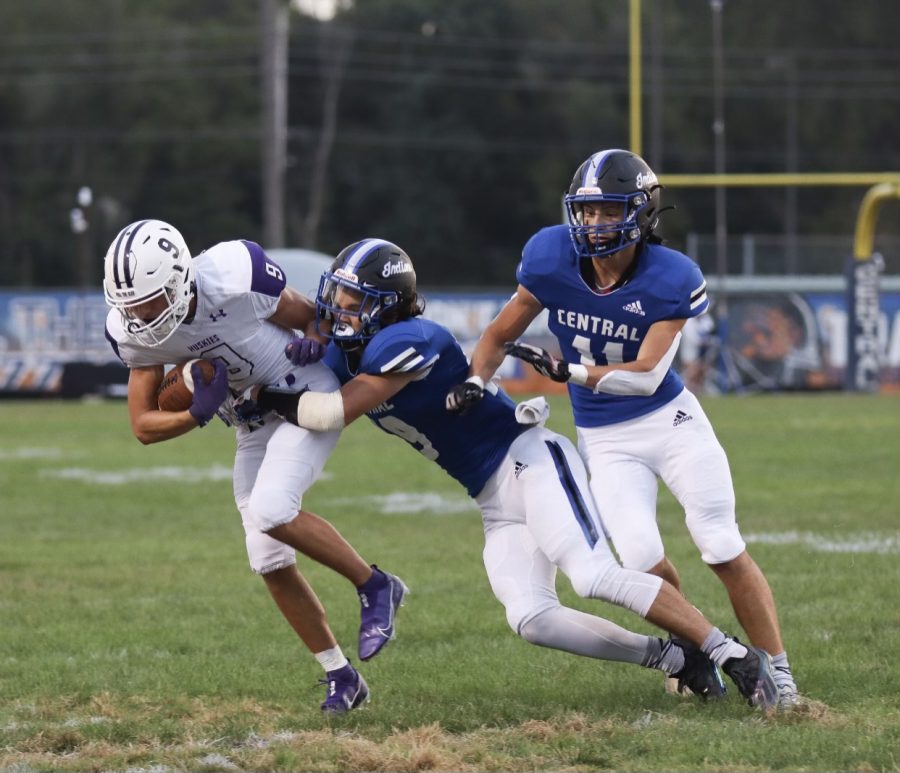 After last week’s 49-36 win over Bishop Miege, seniors Mikey Pauley and Sebastian Meriano said they weren’t satisfied with their performance due to avoidable turnovers and poor play on the defensive side of the ball. Pauley said the team came into the game against Central looking to clean up some mistakes from the week before.

“We were playing to better ourselves. We were definitely thinking about the opponent, but came into this game trying to fix ourselves and work out everything that we had problems with last week,” Pauley said.

On the first play of the second quarter, senior defensive lineman Carter Worthington got an interception. On the following play, Pauley found Whitter for a 13-yard touchdown pass, making the score 35-0. Worthington said it was a great feeling to help the team out and make a big play on defense.

“Getting the interception felt great. Every time you can get a big play like that it is a great feeling to help your team out,” Worthington said. “We practiced defending screen passes earlier in the week to see that pay off was really big for me.”

Pauley scored on a 48-yard rushing touchdown with 7:14 remaining in the second quarter. The score remained the same for the rest of the quarter and the Huskies entered halftime leading the Indians, 42-0. Pauley said the offense’s strong first-half performance was a testament to their preparation coming into the game.

“We did a great job spreading out the ball and getting everybody a bunch of touches. We executed our quick passes and let our athletes go to work. We showed that we were really well prepared tonight,” Pauley said.

Similar to Pauley, Worthington said the defense performed well and proved themselves in what they believed to be a bounceback game after last week’s performance against Bishop Miege.

“We knew we had to have a bounceback game after the Miege game and I completely believe we did that well. I’m proud of our effort tonight and proud of how we played. We’re going to continue to do this all season and this is just going to be the start,” Worthington said.

“It’s fun to be able to bring the sub-varsity guys into the game and this is something that I’ve never really been able to do since I’ve been here,” Rider said. “It’s a great feeling to see them able to go out and experience a Friday night where the crowd is bigger, the lights are a little bit brighter and the stage is a little different. They were playing against some older kids and they came out and did a really good job.”

Worthington agreed with Rider, saying it felt great to see all the hard work the sub-varsity players put in at practice be able to pay off for them.

“We see them working hard at practice and to just see them able to get on the field is great. Knowing that we gave them the opportunity to do that is a great feeling and I’m really happy they got to play tonight,” Worthington said.

With the win, the Huskies record improves to 3-0 on the season. The Huskies will take on St. James Academy at 7:00 p.m. at Bishop Miege in their next game, Friday, Sept. 24.