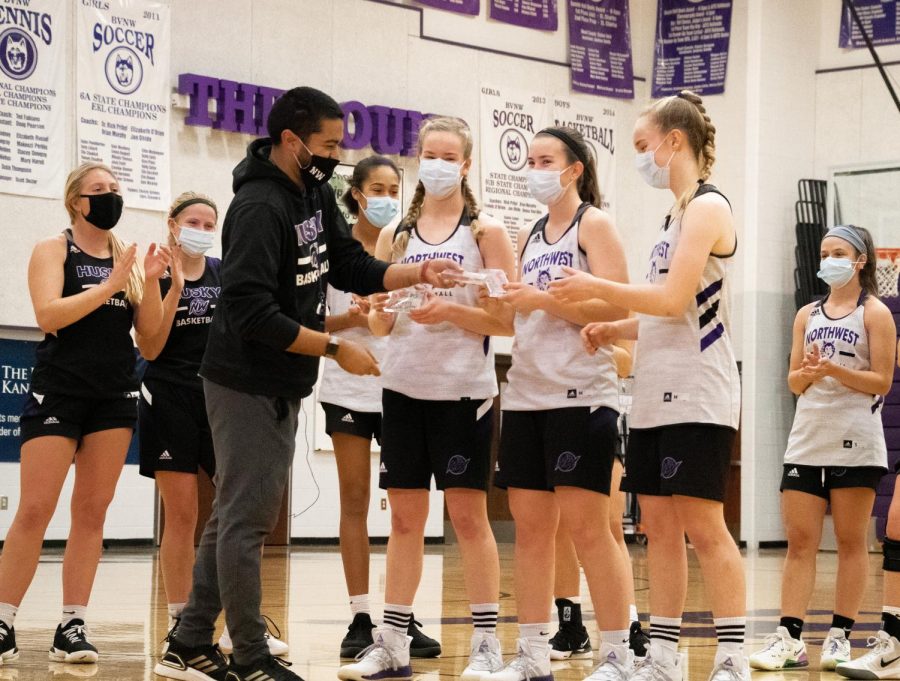 Following the girls varsity basketball 42-34 win over Mill Valley on Dec. 8, the team was in a post game huddle when head coach Matt Shulman announced that junior Brynn Grosdidier and freshmen Elise and Josie Grosdidier had been named the Spectrum Sports Hyvee Athletes of the week.

After learning they had won the award, the sisters all said they were surprised and Elise said it made it even more special to share the moment with her sisters.

“We were all really shocked when we found out we had won, but it was a cool moment,” Elise said. “Being able to win the award with my sisters made it even better because we’ve all worked so hard to get where we are and this shows how the hard work pays off.”

With the award coming after a 3-0 start to the season, Josie said they wouldn’t have won the award without the success of the team.

“The award is really cool to win, but I think most of it is that our team has done really well and we wouldn’t have won it without the team,” Josie said.

Shulman said he enjoys having the sisters on the team because they get along well and play well together. He also said Brynn has been a good leader, helping her sisters adapt to the varsity level.

“They’ve all had some success early and that’s helped them gain a lot of confidence, but it’s been great to have them because they all work very well together,” Shulman said. “Brynn has been a very strong leader not only for her sisters, but for the whole team, explaining and preparing for them what varsity basketball looks like.”

Having played with her sisters for a long time, Brynn said they enjoy playing together and she has been looking forward to playing on the same team as them at Northwest.

“I’ve been looking forward to playing with them for awhile now, mostly because we push each other to get better and work harder and we’re all more competitive when we’re around each other,” Brynn said. “They’ve adapted to the varsity level really well. Before the season, I told them what the expectations were and what the team was like and I think that really helped them get in the right mindset.”

For Elise and Josie, the award came after playing just three games at the varsity level. Elise said this made the award even more surprising as she didn’t expect a freshman to receive it.

“I wouldn’t expect them to notice a freshman and that made it such a cool experience because we had only played three games,” Elise said.

By starting the season 3-0, the team matched their win total from last season. Brynn said the team is taking it day by day.

“For now, our goal is to take it game by game, day by day and just hope to win our next game,” Brynn said. “I want to improve myself and help the rest of the team improve at the same time.”

Josie shared the same message as Brynn, as she said she hopes the team continues its success.

“I just hope we have a successful season. It doesn’t mean we have to win every game, but I think if we play well as a team we’ll have a good season.”