Vancrum takes Midfielder of the Year, Pollack takes Coach of the Year for the EKL

The EKL awards for soccer featured nine Huskies, including senior Will Vancrum who won Midfielder of the Year and head coach Brian Pollack who won Coach of the Year. 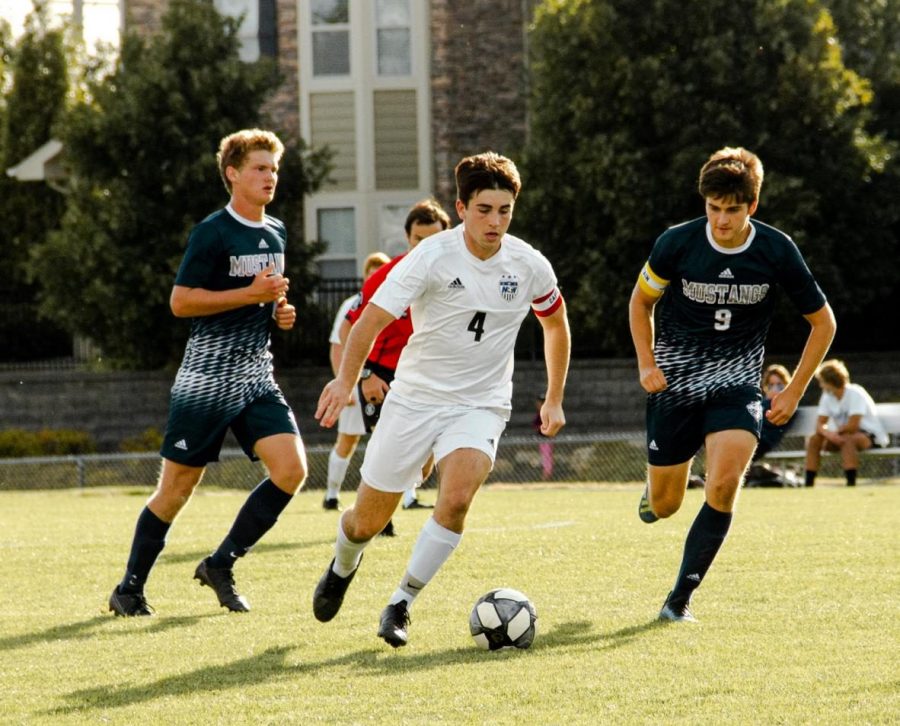 Senior Will Vancrum passes the ball away from Blue Valley North in the varsity game, Oct. 2.

When the EKL awards were announced, the Huskies were well represented. Senior Will Vancrum won Midfielder of the Year and head coach Brian Pollack took Coach of the Year. Apart from Vancrum who also made the first team, the Huskies had two more first teamers, two second teamers and three honorable mentions.

With the award, Vancrum said he was able to accomplish something he has been hoping for since he started his high school career.

“I was really excited, it’s definitely something you hope for since your freshman year and it’s a good achievement for me,” Vancrum said.

Playing in the highly-competitive EKL, Pollack said the award came with some surprise, but he ultimately felt honored to win.

“When I first found out, I was honestly surprised,” Pollack said. “If you look across the board at the competition and coaches in the EKL, just being in the company of some of those coaches is impressive and to be nominated at the top of the list is an honor.”

Vancrum said while they were unable to accomplish the ultimate goal of ending the season as state champions, it makes him feel better to have won the award.

“It feels good to end as the best midfielder in the EKL but it’s not how I hoped the season would end. I wish we were able to win a state championship. Winning this definitely helps with the pain of not winning state,” Vancrum said.

Pollack attributed being named coach of the year to the players and all the hard work they put in over the year.

“The culture that the players set, especially the 10 seniors, was the primary factor in me receiving this award,” Pollack said. “They came out everyday, competed and had fun and it really made my job easy.”

Being named captain for his team, Vancrum said he believes his leadership was a deciding factor for him getting the award.

“I feel like the main reason I won the award was based on my leadership, I feel like I was able to be a good leader for our team. I came to practice every day and worked hard,” Vancrum said.

With Vancrum and seven others making All-EKL teams, Pollack said he was proud of the players and felt that all of them deserved it.

“You look at Will and his career and what he’s meant to Northwest and you see that he certainly deserves all the recognition he got,” Pollack said. “The same goes with Luke [Rahto], Charlie [Rauter], Aidan [Knauth] and all the other guys that have meant so much to Northwest and they’re all a byproduct of our success.”