The boys varsity soccer team was defeated by the Blue Valley Southwest Timberwolves, 3-1, Oct. 20. The lone goal was scored by junior Ryan Masterson. 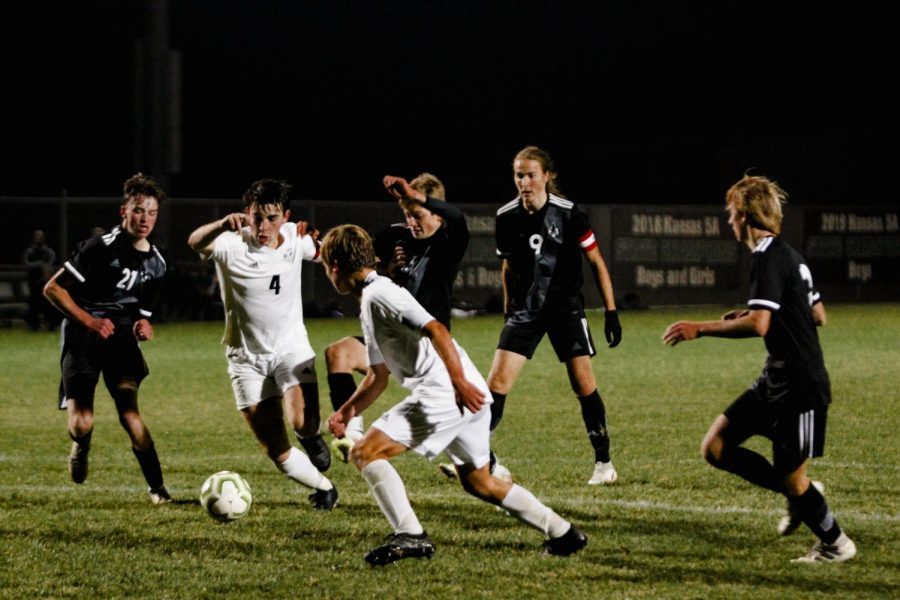 Senior Will Vancrum dribbles the ball through the defense.

After a scoreless opening nine minutes, junior Ryan Masterson would put the Huskies on the board first, giving them a 1-0 lead. Before the end of the half, the Timberwolves would add two more goals, one of which would come off goalkeeper Jared Young slipping on the wet grass. Young said the conditions made the game more difficult for him.

“It made the ball harder to control and obviously I slipped on the second goal and it just sucks,” Young said.

Coming out of the half, Northwest would spend the majority of the half on the attacking end. Regardless, the only team to add a goal in the second half would be Southwest at the fifteen minute mark. The goal would put the game out of reach and the Huskies would go on to lose, 3-1.

Despite spending much of the half attacking, head coach Brian Pollack said they weren’t able to get it in the net because

Going down 3-1, Young said he was still confident in his offense’s ability to make a comeback.

“I’m always confident we can make a comeback no matter how much we are down, there is always something that can happen, but we just had a few shots that didn’t go in, the ball didn’t bounce our way and it didn’t work out,” Young said.

With a victory, the Huskies would have clinched the EKL outright, something which Pollack said his team was able to play through.

“I think there is always heightened energy when you play rivals or a high caliber team like Southwest, and I think having the EKL dingled in front of you, I’m sure there is a degree of pressure that goes into that, but our guys are seasoned and we had moments where we played our game,” Pollack said.