Improving their record to 3-0, Blue Valley Northwest held Blue Valley Southwest scoreless in the second half as they came back from an early 7-19 deficit, scoring 35 unanswered points, Friday Oct. 2. 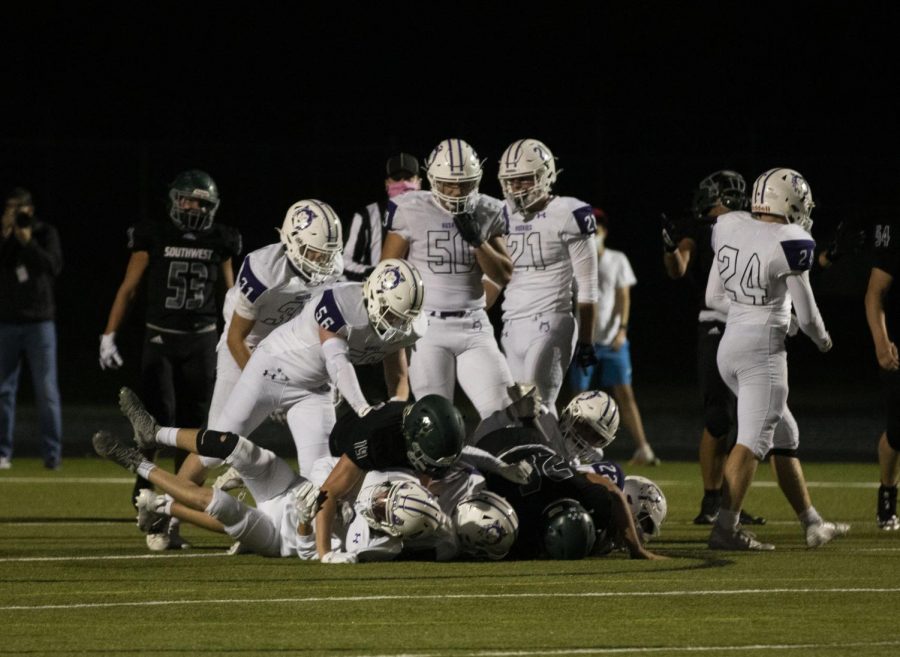 Coming off a game where the Huskies were in control, defeating Blue Valley West 40-17 on Sept. 26, they found themselves in a new situation after giving up 19 points off of four turnovers early in the first half against the Timberwolves. Down 7-19 with 2:46 remaining in the second quarter, the Huskies were trailing for the first time this season. Head coach Clint Rider attributed this to a strong game plan by the Timberwolves.

“They always have a good game plan for us, they mixed up coverages and had guys in spots to essentially contain us and it caused us to force some turnovers,” Rider said. “They had us on our heels and it was the first time this season these guys had to face adversity.”

Trailing 7-19 with little time remaining in the half, junior quarterback Mikey Pauley led the Huskies on a two-minute drill, connecting with junior Max Muehlberger on a 16 yard pass for a touchdown to lessen the deficit heading into halftime. Muehlberger said the team knew they needed to score before halftime, so they stuck to the play calling and trusted in the offensive line on a quick drive that resulted in a touchdown.

“We just stuck to the play calling and trusted in our o-line,” Muehlberger said. “Mikey put a perfect ball on the money, I got it and we scored and that was a huge booster for us going into the second half.”

Taking the energy from the touchdown late in the first half to the second half, Pauley said the team had the mindset they were better than the Timberwolves and they started to figure things out on both sides of the ball.

“We realized that we were just a better team than them and we started figuring it out,” Pauley said. “The line started to do a lot better, we had a lot less penalties, and we just gained a lot of momentum from that play.”

After junior receiver Steven Whitter got injured shortly before halftime, junior Drew Kaufman took over for him in the second half, making plays on both sides of the ball. Kaufman said Whitter getting hurt was just another example of how the team had to battle through adversity.

“Whitter getting hurt was obviously unexpected, but we had been battling through adversity the entire game, so we were ready for it,” Kaufman said.

A goal of Rider’s is to hold the opponent to under 21 points every game. The Huskies managed to do so despite allowing 19 points in the first half. This marked the third straight game that the Huskies shut out an opponent in a half. Kaufman said the defense did a great job staying in the game mentally and ultimately accomplished their goal by holding the Timberwolves scoreless in the second half.

“The defense really stepped it up in the second half and I think that was a big part of the comeback,” Kaufman said. “I was nervous that we weren’t going to be able to hold them to under 21, but we stayed in the game mentally and did our job.”

Pauley finished the game with three passing touchdowns to go along with two rushing touchdowns. Finishing the game on a 35-0 run, Pauley said it felt great and he knew the team was capable of it.

“It was great, when the line does their job everything clicks and that’s what happened tonight,” Pauley said.

The win for the Huskies improves their record to 3-0 and cements a winning season for the first time since 2014. Rider said he is proud of how far the team has come, but the team isn’t done yet.

“I’m very proud of the guys, they’ve worked hard for this and they should be glad to see it pay off,” Rider said. “We’re not done winning yet, but I hope this begins to turn the tide of the program and people start to talk about us differently.”

Agreeing with Rider, Kaufman said the work the team has put in over the years has led them to get to where they are now.

“I feel like this finally shows all the hard work we’ve put in since eighth grade has paid off,” Kaufman said. “We’ve been coming in the mornings to lift and we’ve just been grinding and it feels great to see the results.”

Muehlberger said it is an amazing feeling to be a part of a winning team, but ultimately their goal is to continue their success.

“It feels amazing to be a part of this, but we’re just taking it game by game and we just hope to keep winning,” Muehlberger said.

The Huskies’ next game is a home game against Blue Valley North on Oct. 9. It is scheduled to begin at 7 at the DAC.