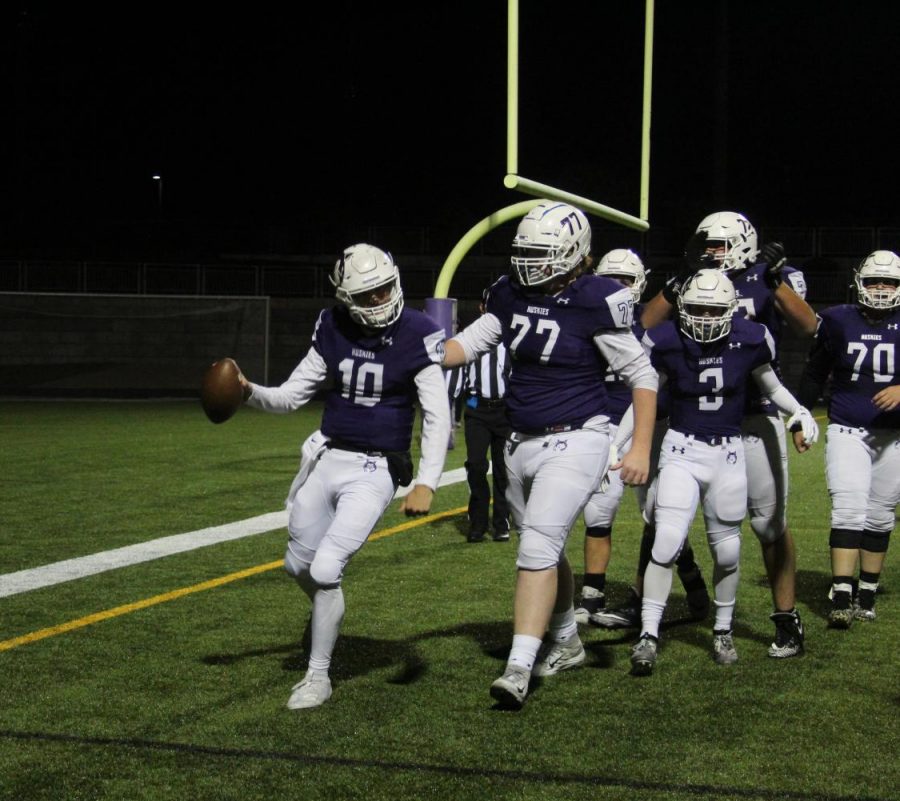 Despite the BVNW football players having a positive, winning mentality going into the game, as well as making changes at halftime, BVNW lost the homecoming game to BVW, 32-14.

Going into the game, sophomore running back Drew Kaufman believed the Huskies were ready to play.

“My mentality was that we can win this game if we play hard [and] that [BVW] is no better than we are,” Kaufman said.

Rider agreed with Kaufman, saying that his team was much more focused and ready to play for the BVW game compared to last week’s game against Blue Valley.

“We were much more focused tonight… a lot more than we were in last week’s game [against BVHS],” Rider said.

Despite their mental preparation, the Huskies let up 20 points before answering to the Jaguars.

With 4:13 remaining in the second quarter, BVNW trailed BVW, 20-0. Then, with 3:06 left, sophomore quarterback Mikey Pauley ran in a touchdown, followed by a successful extra point attempt by senior Drew Coble. The Huskies would close out the half trailing, 20-7.

As the Huskies went into the locker room for halftime, a new group took the field; the 2019 Homecoming Queen and King Candidates.

Back in the locker room, Rider was making adjustments to the team as well as motivating them to have a better second half.

“[During halftime] we made some adjustments based on what [BVW] started doing,” Rider said.

Pauley noted that the Huskies came out in the second half ready to play.

“The line started picking up the intensity and the receivers were [running] good routes,” Pauley said.

Kaufman said that in addition to changing things for the second half, Rider encouraged the team to play to their full potential.

“[Rider] told us that we needed to come out and fight and play hard and that we can win this game if we play like we know how,” Kaufman said.

With 3:16 remaining in the third quarter, Kaufman scored a 5-yard touchdown, followed by another successful extra point attempt by Coble.

Rider said the Huskies did a good job making things happen and that defense had some good stops, but unfortunately, they were unable to score while in the red zone.

“Obviously we’re down 20-14… but we have just got to finish on both sides [and] score in the red zone,” Rider said.

As for next week’s game against Blue Valley North, the BVNW football team is looking to secure a victory.

“[For North] we plan to win and run the ball over them,” Kaufman said.

In addition, Rider plans to watch film and learn from the mistakes of this game, so that next week the Huskies can perform better.

“[BVN] has a slightly different style, they throw it around a lot more, so defensively we need to decide how we are going to approach that,” Rider said.

Pauley added that for next week’s game against the Mustangs, the Huskies need to be more successful on the offensive front.

“We got to convert more in the red zone and just finish our chances,” Pauley said.