With their third straight win in as many years at Kauffman stadium, the varsity baseball team defeated Summit Christian Academy on April 21, to improve their record to 7-3 on the season. With the win, senior Scott Duensing’s record goes to 3-1. 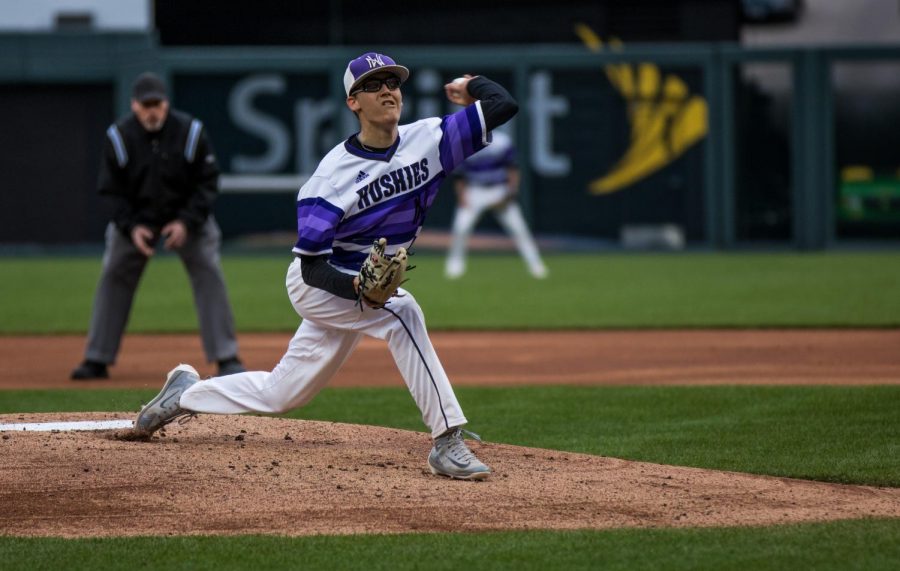 Senior Scott Duensing throws a pitch during the Huskies matchup with Summit Christian Academy at Kauffman Stadium April 21. Duensing threw a complete game and the Huskies defeated the Eagles, 6-2.

With two straight wins at Kauffman stadium in the previous two years against Blue Valley North, the Blue Valley Northwest Huskies found themselves in an opportunity to take home their third straight Kauffman win Saturday night. Although the Mustangs were not the opponent in the Huskies latest rendition at Kauffman, the result was all to similar for BVNW as they rode a big six-run second inning and a complete game from senior Scott Duensing for their seventh win of the season.

After falling behind 1-0 in the first inning of the game against SCA, Duensing was able to calm down and retired 20 of the last 24 Eagle batters the senior left-hander faced. Duensing finished with eight strikeouts, allowing two runs on six hits. Duensing said his ability to execute on the mound was due in part to his confidence level.

“I was feeling really good,” Duensing said. “I actually haven’t had that much confidence in my stuff in a long time, especially in my curveball and my changeup.”

This isn’t the first time a Northwest pitcher has thrown a complete game at Kauffman stadium. The other pitcher, 2016 BVNW graduate Cole Duensing, Duensing’s older brother, threw a complete game in the 2016 edition of the High School Baseball Classic.

Regardless of the complete game, Duensing said the faith he had in his teams capability to pull out a win was never in doubt.

“It’s definitely always exciting to get out there and throw,” Duensing. “I know I got a team behind me.”

A key contributor in the six-run second inning was junior Ryan Freiermuth who gave the Huskies a 2-1 lead with a two-run double. Freiermuth said he was just trying to help out his team in anyway he could.

“It felt pretty good just to help out the team and get us some more runs and momentum in the game,” Freiermuth said.

The Huskies went on to total six hits in the game, with two of those belonging to sophomore Matt Miller. One of those hits was a second inning two-run double, which helped to extend the second inning rally.

Miller said his success in the batter’s box was due to his ability to remain calm.

“I was just feeling loose, making sure that the hands were loose and relaxed,” Miller said.

After this morning’s win against Jefferson City, head coach Corby Lange said the team responded well in their second game of the day.

“I thought we bounced back. I though our pitchers were ahead of the count all day long and our defense was solid,” Lange said. “Today was a great day for us.”

The Huskies win improves their record to 7-3 on the season. Blue Valley Northwest takes on Blue Valley West Tuesday April 24 at the DAC.