The varsity baseball team finished as the third best team in Kansas class 6A baseball for the 2017 season, the highest finish in BVNW baseball history. Junior Will Dennis threw 5 ⅔ innings of 1 run ball, allowing 6 hits, while striking out 5 ONW batters. 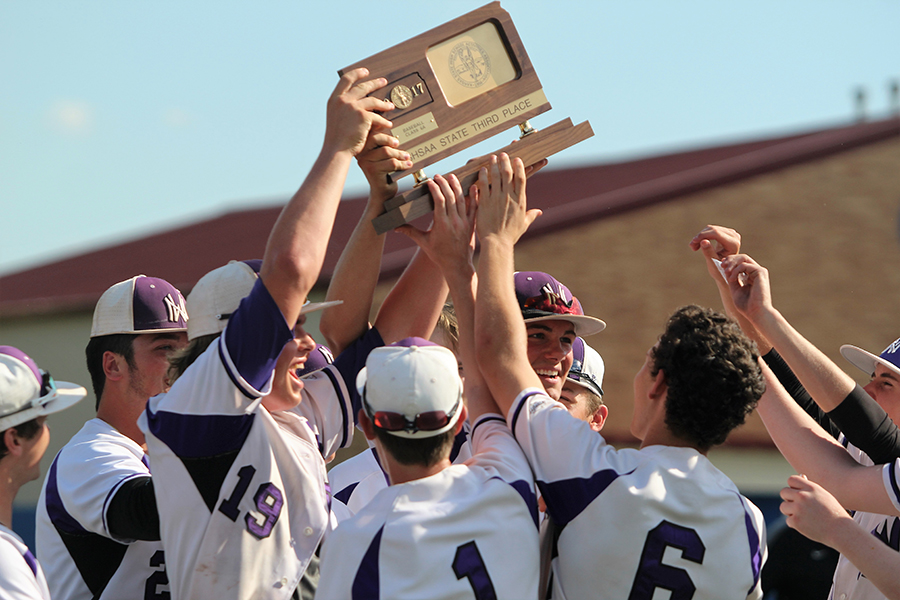 After failing to reach the Kansas class 6A state championship game early Friday afternoon, falling at the hands of Manhattan High 6-3, BVNW returned to action in a third place game against the No. 3 seed Olathe Northwest Ravens. Freshman Ryan Callahan, who went 2-for-3 with an RBI single against ONW, said head coach Corby Lange told the Huskies to vent quickly about the early loss, and then focus for the task at hand.

“Obviously we didn’t win the first game, and we came here and we wanted to win state and we didn’t get what we wanted,” Callahan said. “But, coach told us just to be mad just for a couple of minutes, but then forget about it and just come back out with fire and win that third place game.”

Lange said seeing how hard the semifinal loss was on the Huskies, as well as their response to compose themselves and play well against ONW said a lot about how invested the team was.

“I think everybody knew what was at stake in [the semifinals],” Lange said. “We just came up a little short, and obviously they were upset, and that’s because they’re invested, and when you’re invested, things hurt. We just gave them a little bit of time, got something to eat, and you could see them coming back to life. And they care enough about each other and doing things right that we knew they would come out here and be fired up and want to finish this the right way.”

The Huskies brought the offense to a dejected Ravens team that had just lost 3-0 to Blue Valley High in the semifinals. After two scoreless innings at the plate, the Huskies broke out in the third inning, highlighted by a 2-run double from senior catcher Connor Ellefson.

Lead in hand, junior pitcher Will Dennis took the mound and comfortably manipulated his way through the Olathe Northwest lineup. Dennis never faced any real threat after allowing an RBI single in the bottom of the second inning, cruising through 5 ⅔ innings of one run ball. Dennis handed the ball to junior Scott Duensing in the sixth inning finishing with a 5 walk, 6 hit, 1 run allowed performance.

“[I was] just trusting my fastball and trusting my defense and working in a few curveballs and pounding the zone,” Dennis said.

The Huskies tacked on three insurance runs in the sixth inning, and two more in the seventh to extend the lead to take a 9-1 lead. In the bottom of the seventh inning, a ground ball off an ONW bat found junior third baseman Josh Fiene’s glove. Fiene fired to senior first baseman Johnny Sprinkle to secure the Huskies third place state finish- the highest in BVNW baseball history.

After squeezing the final out, Sprinkle said the growth in the Huskies program was clear, and will be on full display next season.

“I know that a lot of people look at the group and say that there’s a lot of big spots to fill,” says Sprinkle, “but the guys behind all the seniors are fantastically talented and I know that they are going to fill in our shoes extremely well and they’ll be just fine doing what they’ve been doing.”

Callahan said to be a freshman on a record-breaking team is special, and the Huskies program is headed in the right direction.

With the 9-1 victory over Olathe Northwest, Lange and the Huskies finish the 2017 season with a 16-9 record. Lange said he is both optimistic and nervous for the future of the program, which has plenty of youthful talent.

“There’s challenges ahead,” Lange said. “We’ve got big shoes to fill. [The seniors] leave a tremendous footprint and legacy on the program. They’ve done great things. They will be dearly missed and they’re all ready to go onto the next challenge. So it’s exciting, yet it’s nerve-wracking that you’ve got to replace all those guys that did all those great things.”

“Younger guys will step up and get opportunities. Now everybody’s had a taste of this again, and we can hopefully capitalize on this experience and what this is all about and how we did this, and who we are as an identity as a team and we can keep building that and making it better and better every year. This group got there, and hopefully now we can continue to build and every season brings new challenges but I think this group will rise to those challenges.”