In the first game of postseason play, the varsity baseball team defeated Olathe South 5-0 Monday May 15. Senior Johnny Sprinkle went seven scoreless innings on the mound for the Huskies in the victory. 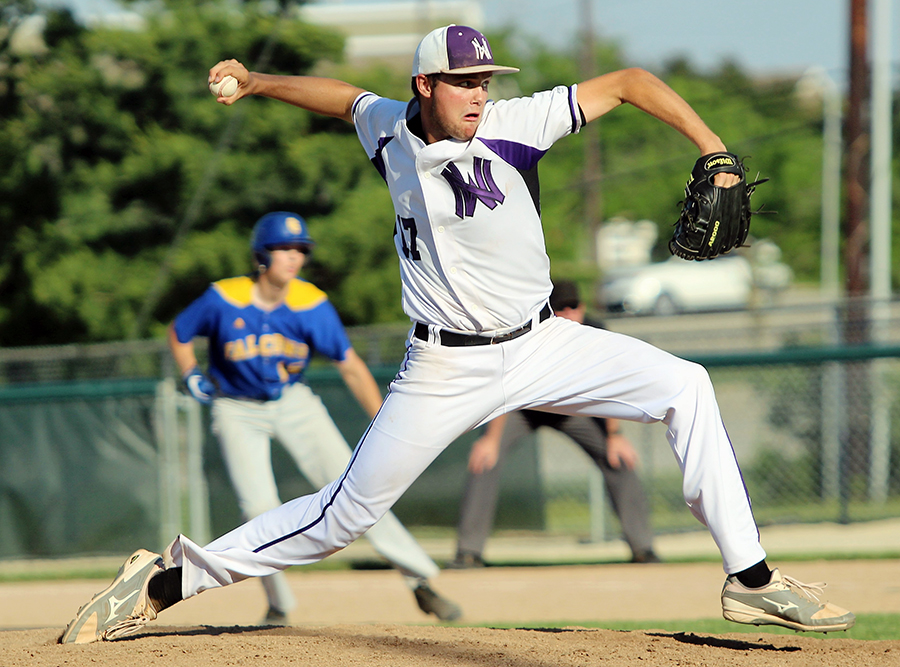 In the first game of postseason play, the varsity baseball team dropped Olathe South in the regional semifinal 5-0 Monday May 15. After consecutive years in which the BVNW baseball program could not eliminate Olathe South in regional play, senior Johnny Sprinkle said the past failure lit a fire for him on the mound.

“Knowing that we were facing Olathe South got me really amped up because we haven’t beaten them the last three years in regionals,” Sprinkle said.

Head coach Corby Lange said he could sense an extra desire to knock the Falcons out. Despite the Huskies entering this contest with a 12-8 record as opposed to OSHS’ 8-12 record, Lange said it was important to see how tuned to the task the team would be.

“It was just great to see our kids, they were ready,” Lange said. “They were hungry for that one, and they came out and played and I was proud of them. It was awesome to see them be focused and go get it done.”

On the mound, Sprinkle settled in early, retiring 10 of the first 11 Falcon batters he faced.

After BVNW batters were hitless through two innings, a Husky rally was started with a one-out double in the third inning by senior Drake Marker. Two batters later, senior Riley Zerni singled, scoring Marker and opening a 1-0 Husky lead.

“I was seeing a lot of fastballs,” Zerni said. “Once again, like last week the ball looked like a beach ball and I just squared it up and hit it to the middle of the field and that got us going I felt like.”

The Huskies added another run in the third inning after a fielder’s choice from senior Jacob Sula scored freshman Ryan Callahan.

With two runs in the third inning, Sprinkle was given enough support but the Huskies would add a run in the fourth, fifth and sixth innings respectively to lead them to a 5-0 victory.

In the top of the fifth inning, the Falcons loaded the bases with two outs, before Sprinkle got out of the jam with a strikeout.

Zerni said despite the fifth inning trouble, his confidence in Sprinkle never wavered.

“When Johnny’s rolling like that and there’s one out with runners on first and second, I have so much confidence that we’ll get out of the inning without anything getting hurt,” the senior outfielder said.

With the 5-0 win over Olathe South, BVNW improved their season record to 13-8.