The varsity baseball team defeated Shawnee Mission Northwest 6-1 Monday May 15 in the regional finals, clinching a berth in the state tournament. Senior Connor Ellefson led the Huskies, going 2-for-2 with 2 walks and 2 RBI. 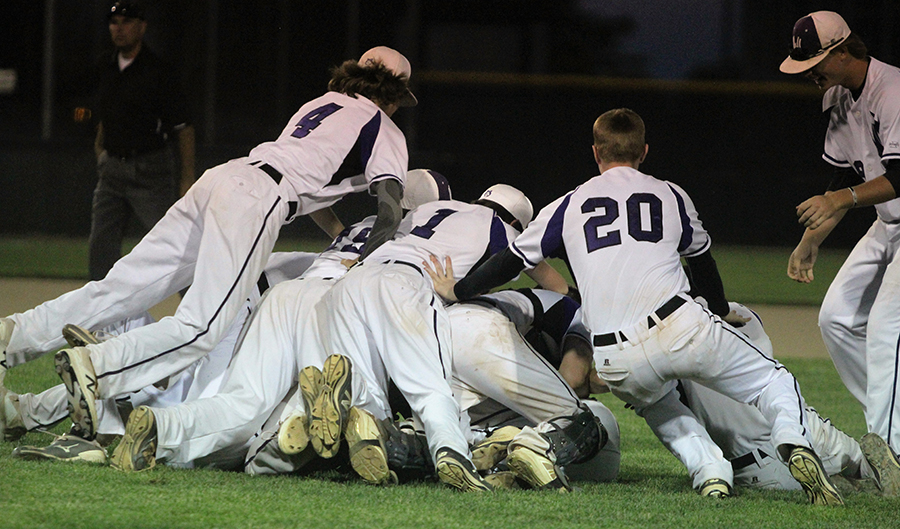 For the first time since 2007, the Blue Valley Northwest baseball program is headed to the state tournament. After defeating Olathe South 5-0 earlier Monday evening, the Huskies went up against the Shawnee Mission Northwest Cougars, who came into the regional as the No. 1 seed with a 15-5 regular season record.

After senior Johnny Sprinkle dominated the Olathe South lineup to a line score of 7 innings, 7 strikeouts, 5 hits and 1 walk, junior Max Abramovich was given the task of dealing with a Cougar lineup that had put up 10 runs against Shawnee Mission South in their regional semifinal win.

Abramovich said after seeing Sprinkle’s performance, he knew exactly what he needed to do to have success.

“Throw a lot of strikes, let them put the ball in play, and deal with whatever I’m given,” Abramovich said of his keys to success.

As has been the case plenty of times this season, Abramovich ran into early trouble in the bottom of the second inning, giving up an RBI triple to fall into an early 1-0 hole against SMNW. The Huskies junior pitcher said his confidence was not fazed.

The Huskies responded in the third inning as senior Drake Marker got things started with a leadoff walk. A throwing error on a pickoff attempt by the Cougars catcher allowed Marker to advance to second base with senior Riley Zerni at the plate. Zerni dribbled a ground ball to the SMNW third baseman who made the Cougars second error of the inning, throwing the ball down the right field line, allowing Marker to score and tie the game, 1-1.

Senior Connor Ellefson stepped to the plate with 2 outs in the third and with the count 3-1 promptly unloaded on a curveball, drilling a 2-run home run that gave the Huskies a 3-1 lead.

“I was just trying to hit a ground ball or line drive up the middle and he threw an off-speed [pitch] and I got my hands inside and threw it the other way,” Ellefson said of his home run swing. “It got us right back in the game, so it was a big game-changer.”

With the Huskies being held hitless through the first two innings, head coach Corby Lange said the third inning was important for them to be able to fight through adversity.

“You’ve gotta find a way to overcome something, and nobody put their head down,” Lange said. “We got down early, their pitcher looked like he was going to be superman, and nobody flinched. We just got to work.”

Junior Josh Fiene followed up Ellefson’s home run with one of his own. Fiene took a full count fastball deep to left field, going back-to-back with Ellefson and extending the Huskies lead to 4-1.

Abramovich finished up 5 innings of 3 hit, 7 strikeout work and handed the ball to junior Scott Duensing, who Abramovich said he had 100 percent confidence in to finish the job.

With two outs in the seventh inning, and the Huskies leading 6-1, Duensing got a SMNW batter to hit a pop fly to center field. Zerni settled under the ball and made the catch, securing the Huskies first regional championship in a decade.

“It’s the best feeling in the world,” Duensing said of the opportunity to get the final out for the Huskies.

With the win, the Huskies improved their record to 14-8 on the season. The state quarterfinal opponent and game time has yet to be determined, but the game will be played at Hoglund Stadium Thursday May 25. Senior Mitchell Bloss, who went 2-for-4 including 2 RBI in the regional final win, said success at the state tournament will come down to whether the Huskies offense shows up or not.

“We’ve got the pitching,” Bloss said. “The offense just has to come through.”

Fiene extended that belief. “The coaches say it and we believe it, we’ve got the best pitching staff in the state,” Fiene said.