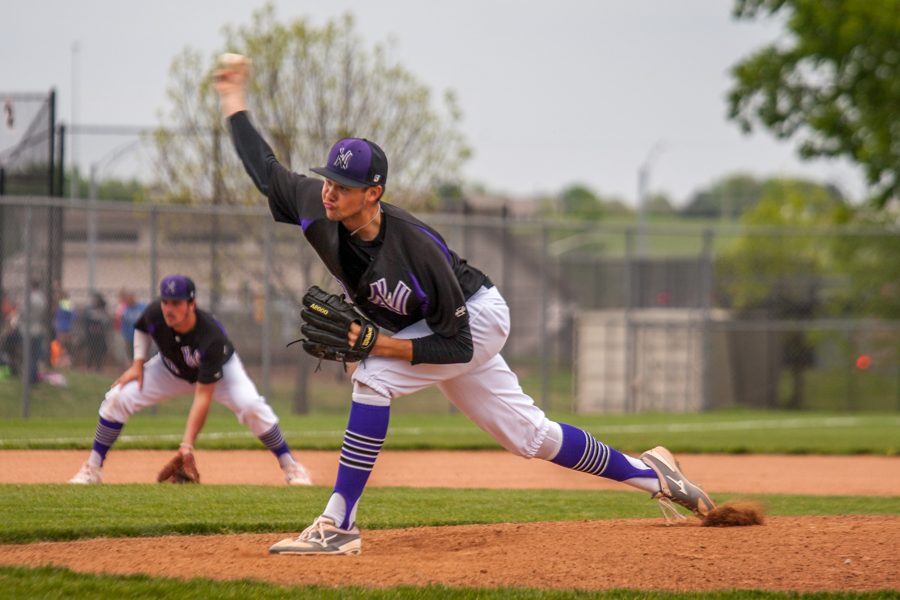 Leading off the bottom half of the seventh inning, the Blue Valley West Jaguars trailed the Blue Valley Northwest Huskies 1-0. A weak ground ball was hit towards BVNW second baseman junior Drew Black. After making plays of much greater difficulty throughout the game, the Huskies second baseman failed to make the play, as his throw to junior first baseman Holden Missey pulled Missey off the bag.

Black offered a very simple explanation as to what went wrong on the play.

“I just couldn’t get it out of my glove,” Black said.

The error allowed the first Jaguar baserunner since the first inning to reach base. But it was not until the next batter doubled over the third base bag, putting two Jaguars in scoring position, that senior starting pitcher Johnny Sprinkle faced a true scoring threat.

With the Huskies infield drawn in to protect the lead, the next BVW batter chopped a ground ball to Black. Black calmly fielded the ball, checked the runner on third and shoveled the ball to Missey for the first out of the inning. After making the put out, Missey found a  Jaguars runner who mistakenly ran towards the pre-occupied third base, headed back towards second base. Missey fired the ball to freshman shortstop Ryan Callahan who unloaded on a throw to senior catcher Connor Ellefson, who tagged out the potential game-tying run for a wild, game-saving double play.

Black said even though he had botched his previous opportunity, he was able to calmly make good of his next chance.

“They tell you not to dwell on it but I used it to motivate myself,” the junior second baseman said. “I kept my head level on that one and made the play.”

The Huskies offense mustered just five hits for the game, and scored their only run of the game after Callahan was able to come around and score after a double play opportunity for the Jaguars was dropped by the first baseman. Despite the offensive struggle for BVNW, the Huskies were picked up by a masterful performance from their senior ace.

Sprinkle made quick work of each inning of work, as he was able to avoid his achilles heel, walks.

“I had a lot of control over all of my pitches,” Sprinkle, who surrendered just two hits for the game, and walked none said.

Finishing with eight strikeouts, Sprinkle’s domination of the Jaguars lineup picked up the Huskies in a low-scoring, defensive battle.

With the win, the Huskies were able to get back to the .500 mark, pulling their record to 5-5, and extending their win streak to three games. The Huskies next game is Thursday April 27 against Blue Valley North. First pitch is scheduled for 5:00 p.m. but will be preceded by the conclusion of a game that was discontinued at Kauffman Stadium on March 31.