A 6-1 victory over the Leavenworth High Pioneers gave Blue Valley Northwest their second-straight win in the River City Baseball Festival Saturday April 22. Junior Will Dennis earned the victory on the mound. 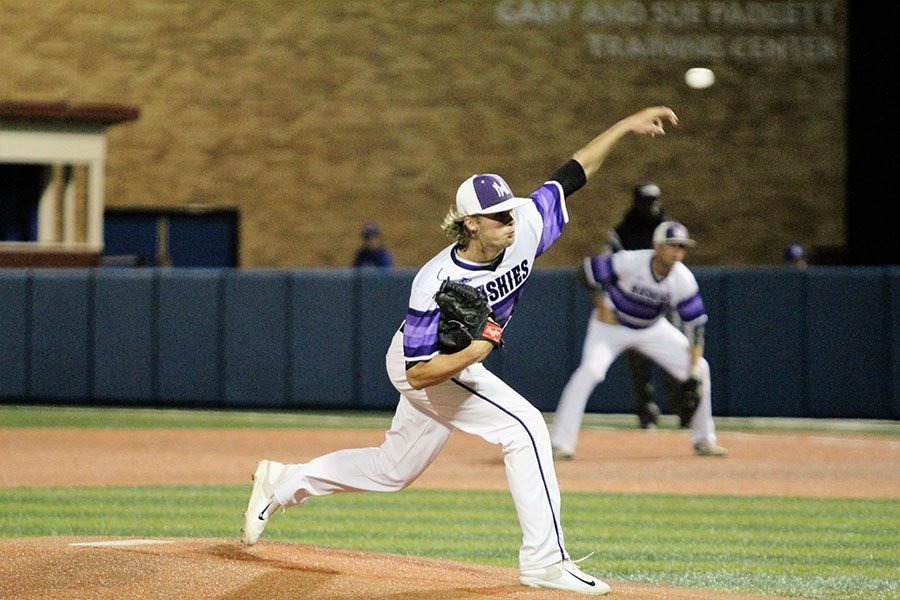 The varsity baseball team picked up their second-straight victory Saturday night in a 6-1 defeat of the Leavenworth High Pioneers.

For the second-straight game, the Blue Valley Northwest Huskies offense came to play, providing junior Will Dennis with 6 runs. Dennis, who was the winning pitcher on this night brought his best on the mound, going six strong innings, allowing a mere 3 hits to Pioneer batters.

“I felt like I had a lot of good first-pitch strikes,” Dennis said. “My changeup really wasn’t on until the third inning but I got my curve working and I threw a lot of strikes.”

Through two innings of work, Dennis had no strikeouts. But with his changeup rounding into form from the third inning on, Dennis was able to strike out multiple batters with it.

The Huskies got out to an early lead in the third inning with a bases-loaded walk by senior Mitchell Bloss, but it was not until the fifth inning that the Huskies gave Dennis an extended lead. In the fifth inning, four of the first five BVNW batters reached base. With one-out, junior Josh Fiene strode to the plate and doubled over the first base bag, scoring senior Riley Zerni.

With 4 RBI in the last two games, Fiene said he feels he is having great at-bats.

“For sure I’m feeling good at the plate now,” Fiene said.

After Fiene’s RBI double, Bloss added to his RBI total for the night with a 2-run single, stretching the Husky lead to 4-1. With the natural progressions of the season, Fiene said the Huskies are picking up the offense with better at-bats and more experience, as exemplified by Bloss’ success.

“We’re all getting more at-bats, seeing more pitches and we’re just getting more comfortable at the plate. We’re keeping our heads up when it doesn’t go our way and that gets results.”

Senior Riley Zerni added a 2-run triple to the Husky cause in the seventh inning before junior Scott Duensing closed out the 6-1 win. After improving their season record to 4-5 with their second-straight victory, Bloss said he was hopeful for the past two Husky victories to become a turning point in their season.

“I hope [it’s a turning point],” the senior outfielder said. “We’ve got some EKL games coming up so I hope we can keep that going.”

While Bloss remained hopeful, Dennis was brimming with confidence for that to be the case.

The Huskies attempt to get back to .500 in their next game, a road matchup with Blue Valley West Tuesday April 25. First pitch is scheduled for 5:00 p.m.