The varsity baseball team lost the first game and won the second in their double-header against Mill Valley Friday April 7. The double-header was scheduled after a rainout on Tuesday April 4. 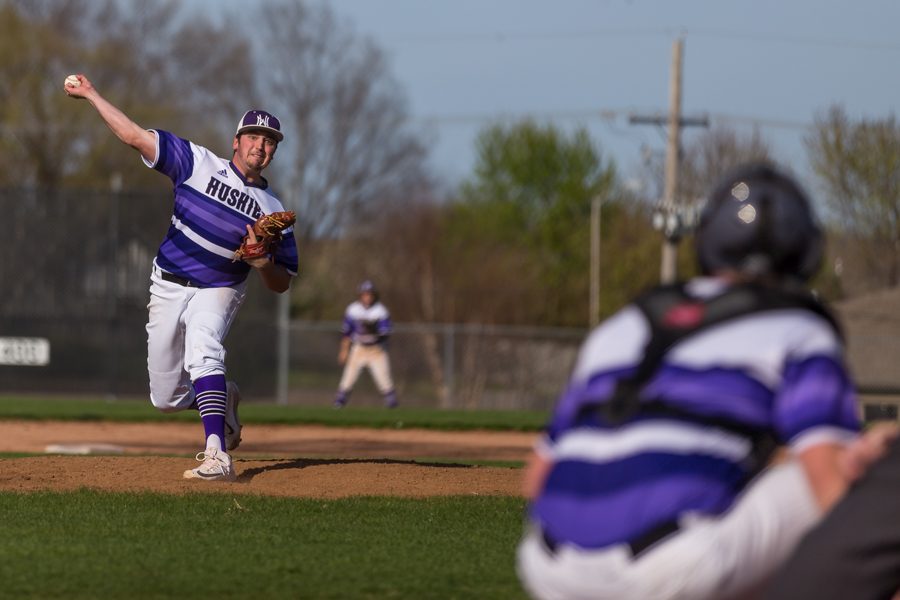 In the first contest of the night, junior Josh Fiene was given the ball as the Huskies starting pitcher in the matchup the Huskies would play as the visitors. After allowing a leadoff walk to begin the bottom half of the first inning, the next Mill Valley batter lined a ball to left field. The ball one-hopped off of left fielder Drake Marker, and after a throwing error on the relay, Mill Valley led 1-0 two batters into the game.

A sacrifice fly would give the Jaguars an early 2-0 lead, as the Huskies fell behind early. The Huskies would fight back in the top half of the third inning, with Fiene and junior Holden Missey each delivering RBI singles to tie the game 2-2.

“I just saw a fastball on the outer part and I tried to drive it to right field,” Missey, who finished 1-4 with an RBI in the ballgame said. “When you’re down in the game you’ve just got to rally and try to work as a team. Don’t try to be self-centered and try to hit the ball to the fence.”

Although the game would go back-and-forth, with the Huskies trailing 2-2 after the third inning and 3-3 after the fourth, the Huskies would never hold the lead for the entirety of the game. With the loss, the Huskies fell to 0-2 after this game.

Game 2: Huskies pick up first win of the season in 5-1 victory

The Huskies bounced back after losing the first game of the double-header, defeating Mill Valley 5-1 in the nightcap. Junior Max Abramovich was tabbed by head coach Corby Lange as the starting pitcher and was phenomenal all night.

“I had complete control,” Abramovich said. “I felt like all my stuff was working.”

Senior Johnny Sprinkle was the offensive star of the night, as he got the offense started in the second inning, walking before coming around to score on a single by Drake Marker. Sprinkle would continue to carry the load in the third inning as he came through with a bases-clearing three-run double which extended the BVNW lead to 4-0.

Sprinkle, who was the Huskies designated hitter said there is really no difference between only hitting or only pitching on any given night.

“I like being a pitcher and a DH because it’s fun and…  you only have one job to do at a time,” Sprinkle said. “I know that whenever my at-bat’s going to come around I’ll be ready for whatever pitcher’s going out there or whatever situation is on the bases.”

With run-support being a previous issue for the Huskies, Sprinkle said he felt good knowing as a pitcher, how important it is to pitch with a comfortable lead.

“It was really comforting [to provide the run-support] because I know that Max threw a heck of a game,” Sprinkle said. “He threw his tail off out there.”

Abramovich said pitching with some insurance- something other BVNW pitchers have not had the luxury of yet this season- was extremely comforting.

“It always helps [to have run-support],” Abramovich, who threw 5 ⅓ innings of one run ball said. “It changes the way you have to pitch. You don’t have to pitch with the tie, you don’t have to strike people out. You can just let your defense play and let them get a run or two and still keep it going.”

The Huskies went on to win 5-1, as junior Scott Duensing relieved Abramovich and closed the door on the Jaguars comeback hopes.

The Huskies next game is Tuesday April 11 at home against Blue Valley High. First pitch is scheduled for 5:00 p.m.