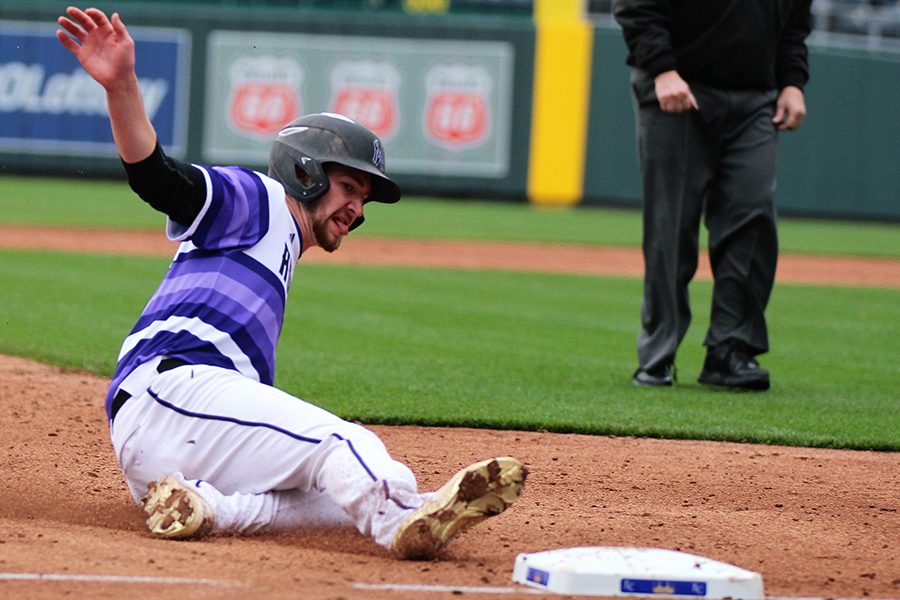 Due to Kauffman Stadium rules for the high school baseball showcase, a 2-hour time limit was enforced. Therefore, the game will be picked back up right where it remains, at a 2-2 tie, with the Huskies leading off the top of the ninth inning.

Senior Jacob Sula doubled with two outs in the top of the second inning, before scoring on a wild pitch two batters later, giving BVNW a 1-0 lead. Sula went 2-for-3 with a single, double and a run scored in the contest.

Senior Johnny Sprinkle got the start on the mound for BVNW and turned in four innings of scoreless baseball. Sprinkle struck out 9 BVN batters, allowing only 3 hits and walking one batter.

“I felt pretty good. I felt like I had a lot of control over my pitches and was hitting my spots,” Sprinkle, who was given a no-decision said.

Head coach Corby Lange said the key to Sprinkle’s success lies in his ability to trust the defense behind him.

“The key to Johnny is he just has to not try to strike guys out,” Lange said. “Use the defense, be willing to pitch to contact and then what ends up happening when you do that is you get the strikeout because [the hitters are] off-balance. He was a competitor today, he did great.”

Senior Riley Zerni dove for the ball but was unable to make the catch, deflecting the ball to prevent what would have likely been an inside-the-park home run for the Mustangs.

After BVN tied the game up in the bottom of the seventh inning with an RBI double down the left-field line, the Mustangs had the winning run just 90 feet from home plate. Dennis was able to get out of the jam, striking out the next batter for the second out of the frame before getting the last BVN batter to ground out back to the mound to end the inning.

Lange said there seemed to be a change in mentality on the mound from last week’s extra-inning loss to Olathe North, something that Dennis displayed in keeping the game tied.

“I think our pitchers look more confident. They’re pitching to contact and not giving in when they get behind in the count,” Lange said.

Junior Max Abramovich came on in the eighth inning, pitching a scoreless inning with 2 strikeouts before the game was called due to the time-limit.

Sprinkle said despite two-straight games with the bullpen blowing the lead, he still has complete confidence in the Huskies pitching staff as a whole.