In the substate final against Gardner Edgerton, Blue Valley Northwest dominated from start to finish, claiming the substate championship in a 72-35 victory. Senior guard AJ Pleasant was the leading scorer for Northwest, with 14 points. 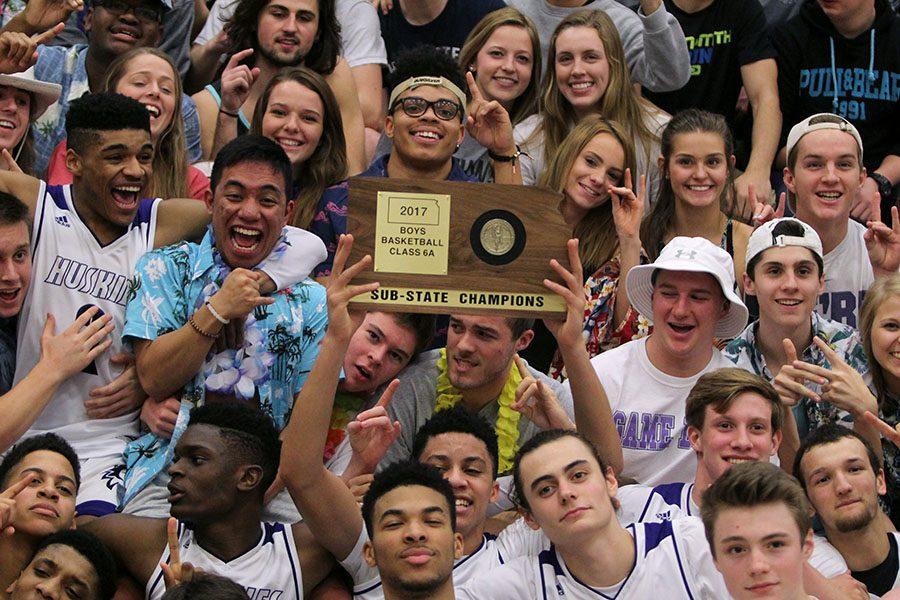 Before learning of who the Huskies would matchup with Friday night, senior guard Jamicheal Morgan made a declaration.

“I ain’t got no preference who we play,” Morgan said after Wednesday’s 56-34 defeat of Blue Valley West. “We’re going to come out hard and beat their [butts].”

Morgan and the rest of the Huskies squad proved that to be true as they punched their ticket to the state tournament in Wichita after a 72-35 romping of Gardner Edgerton.

In yet another game, Northwest led for the duration of the ballgame as senior guard AJ Pleasant began the game in a groove. Pleasant opened the game with a corner three in front of the Gardner bench, before getting to the free throw line and converting two free throws there to open on a personal 5-0 run. Continuing his hot start, Pleasant finished with nine points in the first quarter en route to a team-high 14 for the game.

“When [AJ]’s in attack mode nobody can stop him,” senior guard Darien Jackson said of Pleasant’s offensive scoring and facilitating.

“He got to the rim, and he pushed the pace. So that was good,” head coach Ed Fritz said of Pleasant’s ability as a floor general. “I thought he could’ve done some stuff on defense, but he did a good job. I was proud of him.”

After gaining the early 5-0 lead, Morgan forced a defensive five-second closely guarded violation against a Blazers player. Morgan said the Huskies were able to lock in and maintain focus against a Gardner team that they knew they outmatched.

“We knew one of the big keys was coming out on defense and putting the hammer down early to make them lose momentum and not want to play us anymore,” Morgan said.

Scoring the basketball proved to be an extremely difficult task for the Blazers as the Huskies shut GEHS out for the first seven minutes of second quarter action, going on a 15-0 BVNW run to stretch the Huskies lead to 35-14.

Pleasant said after what the Huskies felt like was a lackluster showing against Blue Valley West, BVNW wanted to get back to what they were used to doing defensively.

“We weren’t really playing to our potential on defense [against BVW on Wednesday night],” Pleasant said. “We really emphasized that in this game, as talented as we are, we shouldn’t have guys that aren’t as talented as us beat us off the dribble so easily.”

After extending the lead before the half, the Huskies cruised to victory, clinching a spot in the state tournament for the seventh time in eight years. A run that Fritz described as “really remarkable.”

As this Blue Valley Northwest team prepares to make the trip to Wichita for the state tournament, the rising level in maturity became more apparent as this season wore on. Fritz said the pressure on this team remains.

“We’ve got a little bit more experience [this year],” Fritz said. “The same guys are playing that played last year. [We’re] a little more mature. But, it’s really hard because we’re number one in state all year from the first ranking all the way to the end, so there’s some pressure with it.”

Jackson, who contributed 11 points of his own, said the team is back to avenge last seasons’ state semifinal defeat.

“We’re more experienced and we’re hungry. We’re ready to get this ring.”

The Huskies head to the state tournament riding an eight-game winning streak. Their state quarterfinal game will be played Wednesday March 8 at Charles Koch Arena. Matchup and scheduled tip-off have yet to be announced.