The girls varsity basketball team ended their season with a 10-11 record after a 41-24 loss at Olathe South in a substate semifinal Thursday March 2. Senior forward Abby Bird scored 10 points in the season-ending defeat. 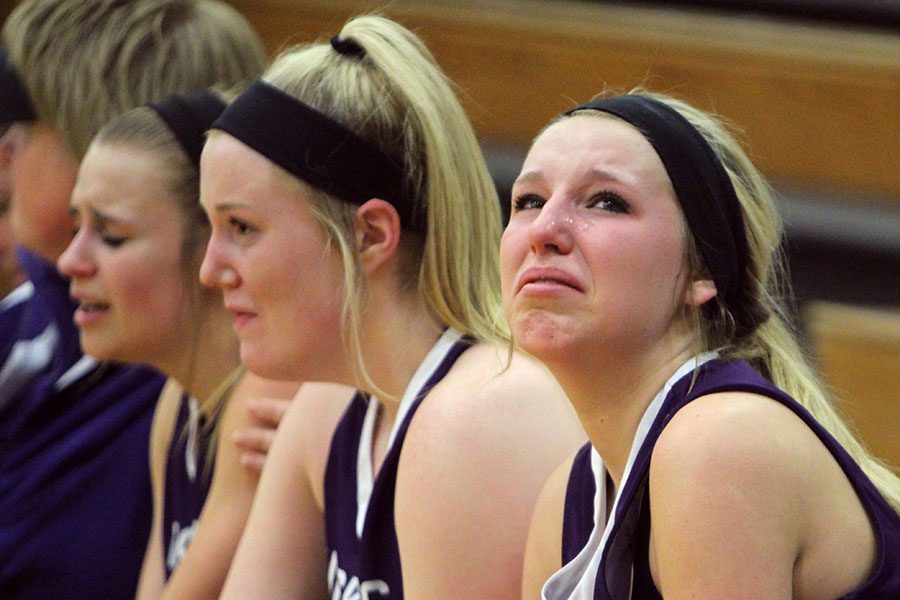 Another Blue Valley Northwest girls basketball season ended Thursday night, with a 41-24 loss in the first round of substate play at Olathe South. The Huskies were slow out of the gates, falling behind the Falcons 6-0 in the first two and a half minutes of play.

“We wanted to come out strong, but we’re known for doing [poorly to begin games],” Bird, who scored a team-high 10 points said. “We often don’t come out strong… it just took them getting ahead of us for us to get ourselves where we need to be.”

A defensive switch to a zone provided the Huskies with a defensive stretch where the Falcons failed to score for 4:14 of game action from late in the first quarter to early in the second. That stretch allowed the Huskies to cut their deficit from 14-4 to 14-13 after senior guard Raegan Phillips weaved through OSHS defenders to get to the basket for a layup.

Head coach Brian Bubalo said that stretch of play was one of the few times all night where the Huskies were able to have offensive success.

“We changed defenses and started taking the ball to the basket,” Bubalo said. “We finally made some shots…we had chances to cut it a little closer but couldn’t get a shot to fall.”

Olathe South’s defense was hard to crack all night for BVNW, as the Huskies were held to single digits in every quarter, and only nine points total in the second half.

With 2:22 remaining in the fourth quarter, Bubalo removed Bird, Phillips and senior guard Taylor Victorine for the final time in their high school careers. As the three exited the game, the emotions hit them before they could even get to the bench, as tears began to flow.

“It made me appreciate being able to play at the next level,” Bird, who will play at the University of Nebraska-Kearney said of her final exit as a member of the BVNW basketball program. “We were just so close that it made it hard.”

Bubalo said despite the Huskies 10-11 record, this season would not be labeled a disappointment to him.

“I’m not at all disappointed in the record. They were a great group to work with, and sure, we’d have liked to have won more, but we won a lot of close games and we had a very exciting season.”