In their substate semifinal against Blue Valley West Wednesday Mar. 1, the boys varsity basketball team pulled out their 18th victory of the season, handling the Jaguars, 56-34. Senior guards Darien Jackson and AJ Pleasant led the way for the Huskies, scoring 14 and 12 points each. 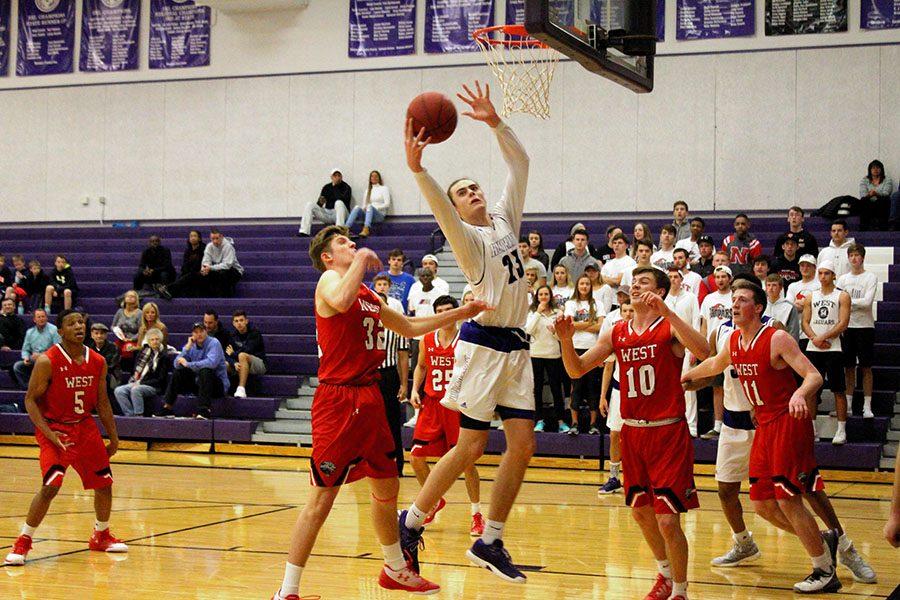 In the first game of postseason play, the No. 1 seed Huskies took down the Jaguars of Blue Valley West, 56-34. Similar to Friday night’s 69-51 win at St. James, the Huskies never trailed in this contest.

But, after defeating Blue Valley West 50-17, in their first matchup on Friday Feb. 10, the Jaguars came out with a different approach to this one.

“We knew they were going to make every possession as long as they could,” head coach Ed Fritz said about the Jaguars offense.

With the slow-paced tempo of BVW, which, at times resembled that of a YMCA men’s league game, the Huskies offense was held to a mere 8 points in the second quarter. Senior guard Darien Jackson said the snail’s pace of the game was frustrating at times.

“They slowed down their offense and took forever each possession,” Jackson said.

With BVNW leading 35-29 early in the fourth quarter, junior guard Sam Ward knocked down his lone three-point basket of the night with 6:54 remaining on the clock.

“That was a really big three that Sam hit,” Jackson said of Ward’s three which sparked a 9-0 Huskies run. “When he made that, it boosted our momentum and we just kept going from there.”

Fritz said he felt that BVNW finally took control of the game after that shot.

“We kind of imposed our will on them,” Fritz said. “We started getting steals and when we’re in a fast break situation, we’re pretty good.”

“They were kind of sagging off, so it gave me a better step to see which direction to go,” Pleasant said. “[I was] just doing what our coach said, to just attack and try to see what the defense gives us, and I just happened to get good lanes and good layups.”

With the win, the Huskies move to 18-3 this season, and earn the opportunity to host a substate final Friday Mar. 3.

Gardner Edgerton defeated Olathe South, earning the Trail Blazers a trip to BVNW Friday night. However, prior to learning of the GEHS win, senior guard Jamicheal Morgan said BVNW’s opponent would not affect their approach.

“I ain’t got no preference who we play,” Morgan said. “We’re going to come out hard and beat their [butts].”