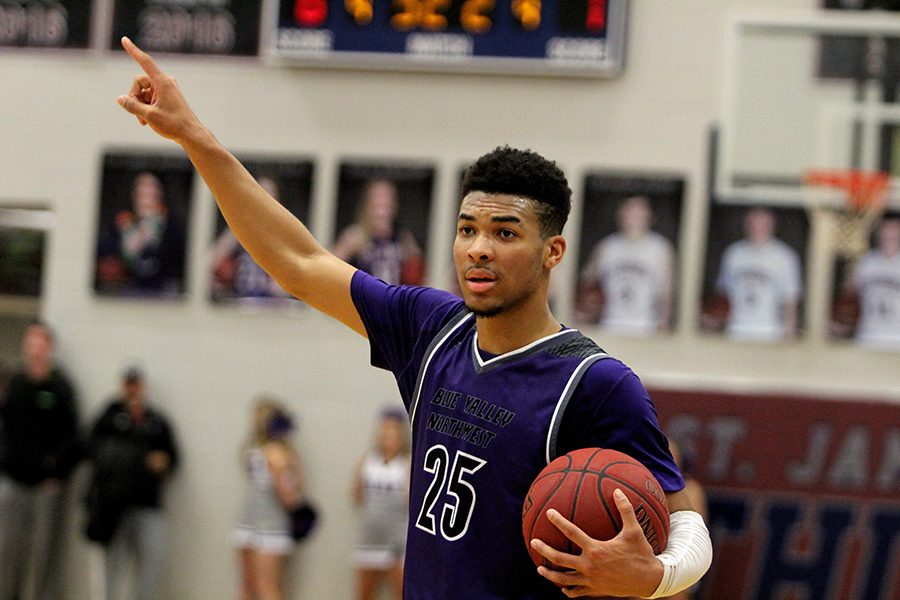 With 5:00 left in the first quarter of the final regular season matchup of the year, senior guard Darien Jackson connected on a pass to fellow senior guard Jamicheal Morgan for an alley-oop slam, giving the Huskies an 8-2 lead. Morgan’s alley-oop dunk were a part of his 13 points on the night.

In a game that the Huskies led from start to finish, BVNW head coach Ed Fritz said it was key for the Huskies to have a fast start.

“We got off to a really good start and that was really good,” Fritz said.

Junior guard Sam Ward was 4/4 on three point attempts for the game, scoring 13 points for the game. Ward extended the Huskies early lead to 20-8 with a corner three to start the second quarter.

“I hit my first two in their zone,” Ward said. “And then in man they were playing me close, so we had very good ball movement and it opened up [the SJA defense].”

With Blue Valley North’s victory over St. Thomas Aquinas and BVNW’s win over SJA, the Huskies earned a co-EKL championship. Ward said the Huskies were excited about their accomplishment, but were not done yet.

“I mean it’s satisfying,” Ward said. “But, we’re also trying to get a state title, so we’re still hungry.”

Jackson finished with a team-high 20 points for the Huskies. After making his commitment to the University of Tulsa on Feb. 23, Jackson said the he was able to play stress-free basketball.

“All the stress is off my shoulders,” Jackson said. “I finally just get to play and don’t have to worry about anything.”

Jackson went as far as to say anything less than a state title would be a disappointment.

“[Being co-EKL champions] means a lot to us as a team, but it doesn’t mean anything if we don’t win state,” Jackson said.

With the win, BVNW finishes the regular season slate with a 17-3 record. Ward said the Huskies should be ready for state tournament action.

“We’re ready for state. We know what we have to do to get there and we just picked up the pace and need to keep it going.”