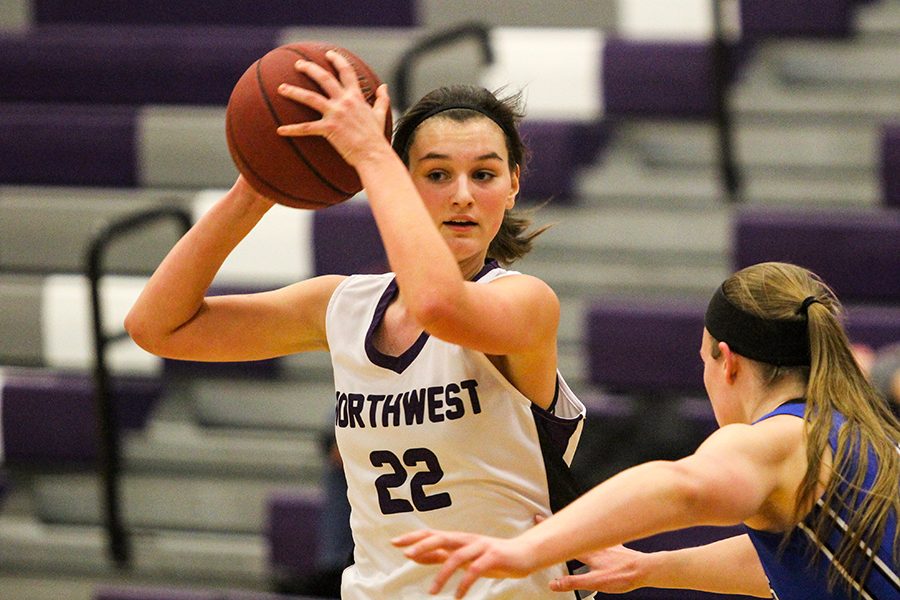 With 0.4 seconds left in overtime, senior forward Abby Bird stepped to the free throw line with the game tied, 54-54. After missing the first free throw, Bird made her next free throw attempt, giving the Huskies their first lead of the game.

Bird scored 17 points in the first half, leading to a game-high 25 points on the night. Despite Bird’s first half outburst, the Huskies trailed the Trailblazers 28-33 at the half. Head coach Brian Bubalo said Bird’s performance was spectacular.

“She had a great ball game, offensively,” Bubalo said. “She was putting the ball in the basket and that was a big part of [the win].”

Despite only trailing by five points at halftime, BVNW found themselves behind, 28-39 after a 6-0 run to begin the third quarter. A four-minute drought to start the third quarter for BVNW was ended after senior guard Raegan Phillips buried a three point basket with 3:27 left in the quarter, beginning an 11-3 BVNW run to end the quarter trailing, 39-42.

Bubalo said the girls made good adjustments at the half.

“We were down 10 in both halves,” Bubalo said. “[The girls] didn’t give up, obviously. And they made the adjustments necessary. So I was real proud of the way they adjusted.”

With the victory, BVNW earned their second overtime victory of the season. Bubalo and Bird both said the team thrives in the high intensity environments.

“We like the close games,” Bubalo said. “All of our games are close and we honestly think we can win every game. Every game that we’re in we never give up, and we fall behind, we don’t give up. We find a way.”

Bird added, “I think when we have a close game we play better. If we’re either winning or losing by a lot, we start to get… messy. But if we’re close we play sharp, and that’s our best game.”

Blue Valley Northwest moves to 7-6 with the win. The Huskies will play Blue Valley Southwest Thursday Feb. 2 at BVNW. Tip-off is scheduled for 7 p.m.