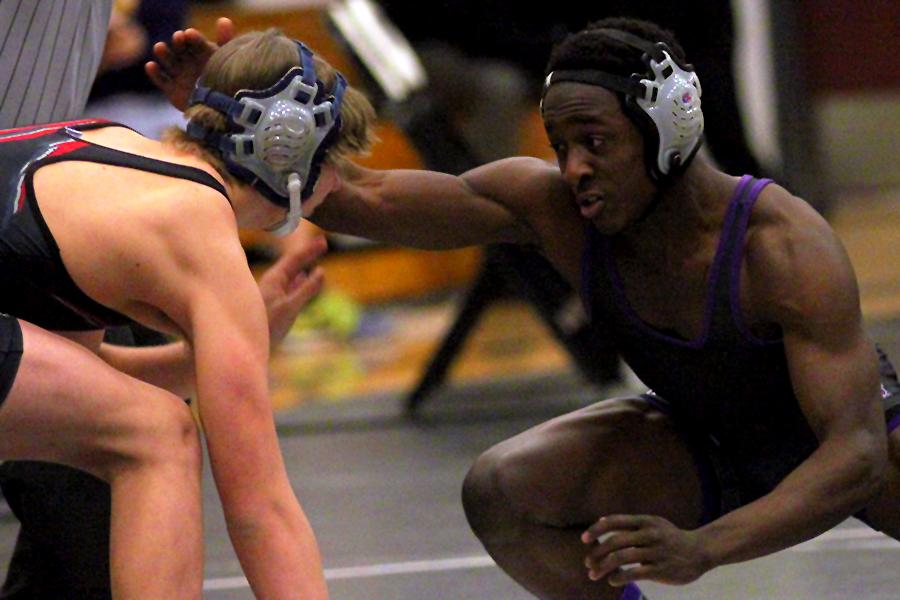 The Blue Valley Northwest (BVNW) wrestling team competed in the Eastern Kansas League (EKL) tournament this past weekend at Blue Valley High School (BVHS), and had eight of it’s members place in order to win the entire tournament as a team. According to head coach Tim Serbousek he has not yet had a team to win BVNW’s host tournament, win the league and win regionals; but he believes this team has a shot to be the first to do so.

“This is just a different group of guys,” Serbousek said. “They don’t get uptight. They’re just enjoying themselves. I’ve seen a lot of guys on a lot of teams who are so stressed out about winning, they can’t enjoy the sport. These guys just let go and do what they do and have some fun with it. I think that’s part of the reason they’ve been so successful.”

The following wrestlers placed in their designated weight class at EKL:

“I’m really excited we won the EKL,” Elliott said. “I think we wrestled well as a team. Personally, I want to try and win two more titles before the season is over.”

Serbousek said although the team was predicted to take third place on paper before the tournament, his team pulled through and defeated key opponents they had not beaten previously to give the Huskies an edge up on the competition.

“When you get first place, I think that’s pretty darn good,” Serbousek said.

Typically, Serbousek said he tapers back the week prior to regionals to save energy, however with this group he intends to keep practicing intensely but cut out the running to save leg strength.

“I expect to do well,” Serbousek said. “The kids have wrestled well all year. We’ll see, a lot can happen between now and then. I expect them to keep doing what they’re doing.”

In order to advance to state, a wrestler must place in the regional tournament which will take place at BVHS this coming weekend. Serbousek said he believes the team has a shot of sending each individual to the state tournament. According to Serbousek, the team has broken almost every school wrestling record apart from the dual meet record, which they would have broken had a meet not been cancelled due to snow.

“It’s been fun [coaching this group of guys],” Serbousek said. “It’s a good group. I really think it has to do with the kids’ attitudes. I’ve got some great coaches right now. When I started out, I had to do absolutely everything, and I mean everything. It just wasn’t doable. If I had the coaches I have now in previous years, those years would’ve been so much better. This is a college staff, second to none. This season has just been phenomenal.”