The boys basketball team was defeated by BVN tonight, 57-59. Their record is currently 10-2. 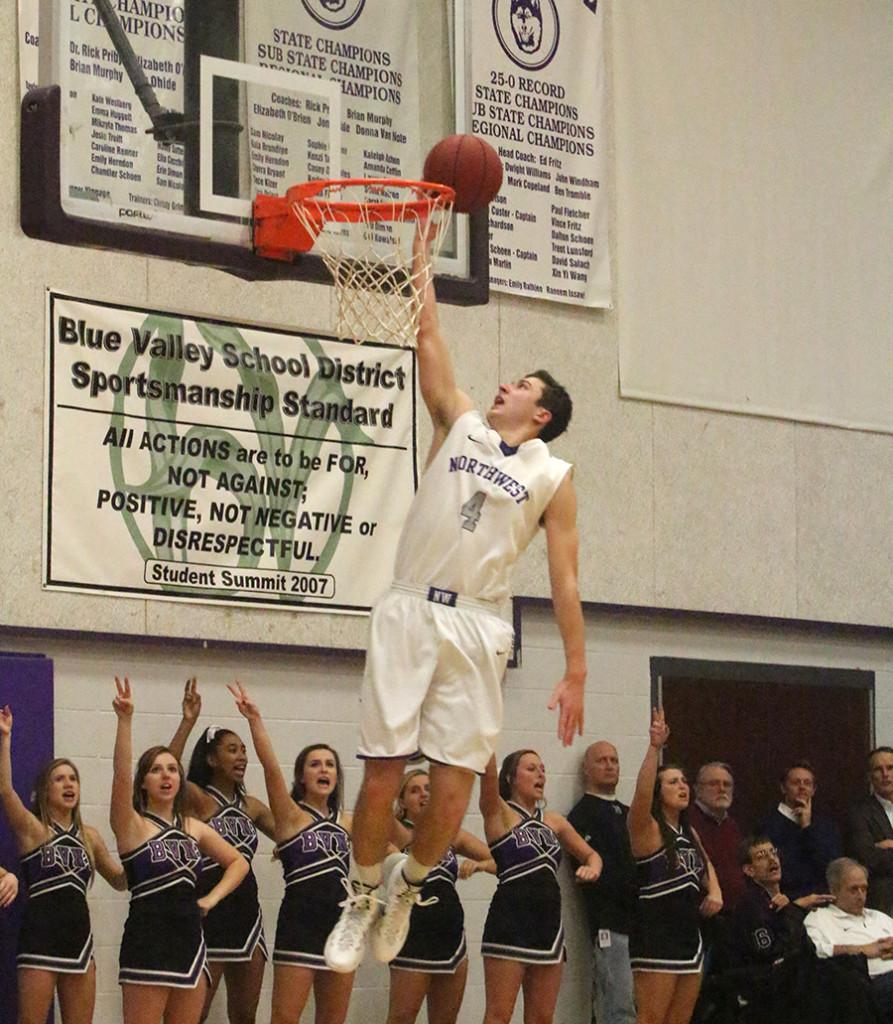 The gym was packed to capacity for tonight’s EKL varsity rival matchup of Blue Valley Northwest and Blue Valley North. The hosting Huskies had previously been undefeated on their home court since 2012, but were unable to keep the streak alive as they fell to the Mustangs in a nail-biting contest that resulted in a two point difference, 57-59.

While BVNW kept a fast pace throughout the first quarter, many of their shots were unable to fall. As a result, BVN took an early lead by sinking a few threes and obtaining offensive boards. At the end of the first quarter, the Mustangs lead the Huskies, 16-8. According to both head coach Ed Fritz and senior Ben Richardson, the team’s defense needed much improvement.

“We need to work on our defense,” Richardson said. “Getting stops and trying to capitalize on them. That’s just something that we didn’t do … [We hit a dry spell with our shooting] and that happens. When you do that, you have to adjust and we didn’t adjust real well so that was another big thing.”

To start the second quarter, the Huskies rapidly gained on the Mustangs to tie the score at 20 four minutes in with a dunk by senior David Salach. While BVNW was unable to take the lead, they kept the score close and at the conclusion of the half the Mustang’s eight point lead diminished to two with a score of 24-26.

The beginning of the second half resulted in quick shots from both teams as neither waited to run their offense all the way through. Two minutes into the half, a technical foul was called on BVN head coach Ryan Phifer and senior Clayton Custer sank both free throws to tie the score at 31. Four minutes into the quarter, the Huskies took a one point lead and Phifer called a timeout in an attempt to calm his team down. The plan worked and by the end of the third quarter the Mustangs established a seven point lead, 39-46.

“I’m happy with the way the team fought back,” assistant varsity coach Zach Harsch. “A lot of teams could’ve crumbled, down seven late. But we got into a situation where we had a chance to tie it.”

With 4:51 left in the game, Fritz called a timeout to figure out a game plan for his team as they had cut the Mustang’s lead to one point, the score 47-48. With a few key three’s by BVN, the Mustangs lengthened their lead to three point, and the Huskies called another timeout with 1:06 left in the game. On the following play,  Richardson was fouled with 54 seconds remaining and was sent to the line. Richardson’s first shot bounced off the back of the rim, but his second fell through the net shortening the Mustangs lead to two. The Huskies forced a turnover and got the ball back, and senior Clayton Custer was fouled on a drive to the basket. He made his first free throw, but his second was short, cutting BVN’s lead to one with 27 seconds left.

“I’m a little disappointed with the way we shot free throws down the stretch,” Harsch said. “Couple times late we settled for jump shots instead of getting fouled. We’ve got to do a better job getting in the bonus and working the ball around and trying to get to the line earlier.”

On the following play, Richardson fouled and sent BVN to the line. The Mustangs had better luck with their free throws, and sank both, lengthening their lead to three. BVNW was unable to score on their following play as senior Kyle Harrison’s three point attempt missed the basket by a wide margin, and the Huskies were forced to foul again in order to receive the ball back. The Mustangs sank both free throws again and took a four point lead with 8 seconds remaining. Custer drove to the basket and scored off a spin move, cutting the lead to two with three seconds left, and the Mustangs traveled on their following play to give the Huskies one last shot with 1.4 seconds to go. Richardson’s inbound pass to Salach was no good and the final buzzer rang before Salach was able to get the ball up to the rim, giving BVN a two point victory over the previously 10-1 Huskies.

“The game obviously didn’t go the way we wanted it to,” Richardson said. “We started not playing our game. They had us. They did a really good job of making us do what they wanted and it went their way.”

According to Harsch, BVN had a good game plan to play against the Huskies, and exploited match up issues well. The Mustangs were going to try and slow down and make it a half court game, and Harsch said unlike the Huskies, BVN executed well and hit their shots.

“We’ve got to get better and bounce back,” Harsch said. “We can’t shoot what we did tonight. We’ve got to run our offense all the way through and we can’t let other teams dictate our matchup issues.

“We shot 3/23 from the three point line tonight. All shooters go through slumps. We’ve been oging up and down all season. We’ve just got to get into the gym and get shots up. I think this might’ve been one of the best things that could’ve happened to us. It was a little bit of a wake up call. I know these guys, I know this team, they’ll take this personally and they’ll come back and work twice as hard to get their shots and their game back where it used to be.”

While Fritz said the Huskies kept fighting, their shooting and defense need work.

“North played a great game, I’ve got to give credit and all that,” Fritz said. “But you know what? It could be a good thing for us. We kind of thought we were pretty special and now maybe we will get back to work a little bit.”