Both the boys and the girls basketball team came away with wins tonight against Gardner Edgerton. 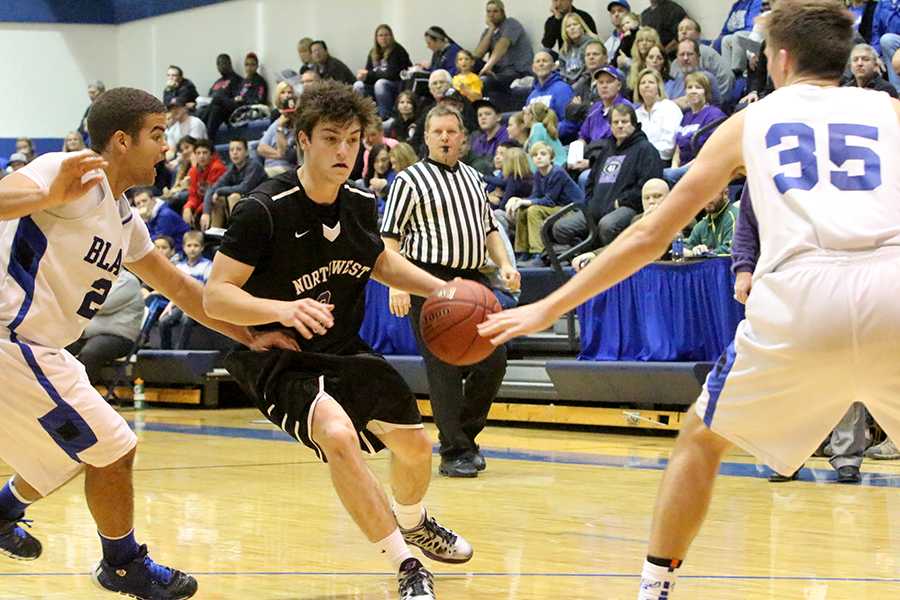 The Blue Valley Northwest basketball teams did not allow Gardner Edgerton’s huge Sweetheart game crowd to intimidate them as both boy’s and girl’s added another W onto their record. The boy’s improved to 6-1 with a 74-47 win, and the girl’s upgraded to a 4-4 record with a nail-biting score of 29-27.

With .09 seconds remaining in the game and the score tied at 27-27, the baseline official called a foul on Gardner Edgerton and junior Lade Adepoju stepped to the free throw line. Despite head coach Brian Bubalo claiming she was calm and collected, Adepoju said she felt quite the opposite as she knew the outcome of the game depended on her next two shots.

“I was so nervous,” Adepoju said. “I was just thinking, ‘I have to make this, we have to win this game. I want to win. We cannot lose.’”

Adepoju sunk the first one and the Huskies’ bench erupted while the Blazer’s coach called a time out to set up their final play. As the whistle blew, Adepoju quickly netted her second shot before falling back to steal the Blazer’s game winning pass to a post player in the back court.

The girl’s varsity team kicked off the night by only allowing the Blazer’s offense to score a meager two points compared to their own eight. While the team started off slow offensively, both head coach Brian Bubalo and juniors Adepoju and Sarah Fugate agree their defense was what set the tone.

“Our defense was our strength,” Bubalo said. “We only held the other team to 27 points total, and two points in the first quarter. That’s pretty solid defense.

The Huskies continued their strong defensive strength by allowing the Blazers only four more points in the second quarter and doubling their own score. Juniors Fugate (who led in scoring with 19) and Deanna Bugarinovic celebrated key threes that kept the Huskies’ momentum rolling.

“I was shooting well,” Fugate said. “I made my free throws. People found me open shots. So that was good. Our passing in the first half was good too, and we did really well communicating.”

Despite the ten point lead going into the second half, Bubalo said his team still looked pretty cold concerning their shooting. The goal for the third and fourth quarters was to tighten up even more so defensively, and to shoot the ball even more as Gardner was doubling up the post and leaving guards wide open.

“We tried to change up our offense a little,” Bubalo said. We tried to just turn them loose and told them to take good shots. I thought they looked a little tight and a little tentative. All we could really do is set some plays for them and encourage them to keep shooting.”

While Bubalo may have verbalized the game plan well, the Huskies had a poor time executing it they embarked on what their coach called a disastrous third quarter.

“We were a little out of sync on defense and [Gardner] got in a rhythm,” Bubalo said. “That cost us our lead.”

The fourth quarter was a nail-biter for both sides of the ball as the lead was traded back in forth multiple times, including yet another clutch three by Bugarinovic to tie the score 27 with only a few minutes remaining. Gardner slowed the game down to a pass and stall game. The Huskies called a timeout in order to set up a defense and get one last shot. At the resumption of the game, the Blazer’s panicked and threw the ball away, giving BVNW a golden opportunity. On a pass from Fugate down court, Adepoju drove to the middle of the lane and up against two defenders as the whistle shrieked and signaled a foul.

Personally, Fugate said she wanted to improve on her shooting and passing; and as a team she wants the Huskies to communicate more and play tighter defense throughout the entire game instead of just two or three quarters.

“I’m happy that we won,” Bubalo said. “I’m happy with the comeback. In the end, we made some plays where we handled the press and finally forced a turnover when we needed to, so I was happy with that.”

The Huskies will take on Blue Springs South Monday night in the BVN hosting of the KAMO tournament.

At the closure of the girl’s game, the eagerly awaited boy’s basketball team took the floor, outfitted in their typical purple pinstripe warm ups. At this time, the gym was near capacity and brimming with excitement. With a shout of anticipation, the crowd cheered and jeered as senior David Salach tipped the ball off to senior Kyle Harrison for the first possession of the game.

The Blazer’s took an early lead of 4-2 a few possessions into the game, their only lead of the night. What followed was a continuous addition of points to the flickering visitors numbers on the scoreboard. Both Harrison and senior Clayton Custer contributed key three pointers to give the Huskies an earnest lead, and senior David Salach capped off the quarter with a slam dunk from Custer. This gave BVNW the momentum they needed as they entered the second quarter, leading 17-8.

“The highlight of the night was David dunking on that guy,” senior Ben Richardson said with a laugh. “That was pretty awesome.”

While Gardner tried to capitalize on it’s big men down low, their defense was no match for the Huskies guards as senior Chase Kilty went 2/2 from the three point range and Custer and senior Vince Fritz added on five points a piece.

“That’s how we play,” head coach Ed Fritz said. “We don’t have a lot of height. We like to get into the lane and kick the ball out. Our guys Ben Richardson and Kyle Harrison and Vince Fritz, they can shoot the ball so we want to get them the ball and get them good shots.”

The Huskies had a quieter third quarter but continued to consistently rack on points. While the Blazer’s retaliated with a few key threes of their own to keep the game interesting, their offense was no match for the seasoned Husky team; which was proved in the final seconds of the third during which a sequence of clean passes circled the perimeter before hitting Salach on a cut for an and one play.

“Passing was a team strength,” Fritz said. “We did a good job of getting in the passing lanes and being aggressive. It’s kind of our mantra to get out and run the ball and to get some easy shots and they did that.”

The fourth and final quarter led to an explosion from Richardson, who prior to the final eight minutes had only put up two points and few blocks. In the fourth alone, Richardson had eleven points and multiple steals offensively and contributed three blocks defensively. Custer also managed to make a splash with multiple smooth finishes beneath the basket after weaving and spinning through defenders as if they were hardly moving at all. The Huskies fed off the pair’s energy to finish the game with a final score of 74-47.

“I needed to hit a few shots because I was cold in the beginning of the game,” Richardson said. “It helped my confidence, and hopefully it will carry on into the next game. Personally, I need to shoot better. Overall as a team, we need to start faster and stronger. We came out slow tonight.”

Fritz agrees with Richardson’s assessment, and said the team will improve on their play execution and traps before playing again. According to Fritz, while it may not have appeared to many to be a big conference game, the team took each opponent seriously and it was an honor for them to win on the road.

“We know what can happen if we aren’t focused,” Fritz said. “We have respect for everybody we played. We’re 44-2 in the EKL in the last four years, and one of those losses was to Gardner against Bubba Starling. So we try to stay focused and play hard every time we step on the floor.”