By defeating Manhattan HS with a score of 2-0, the boys soccer team became class 6A state champions for the first time since 2006. 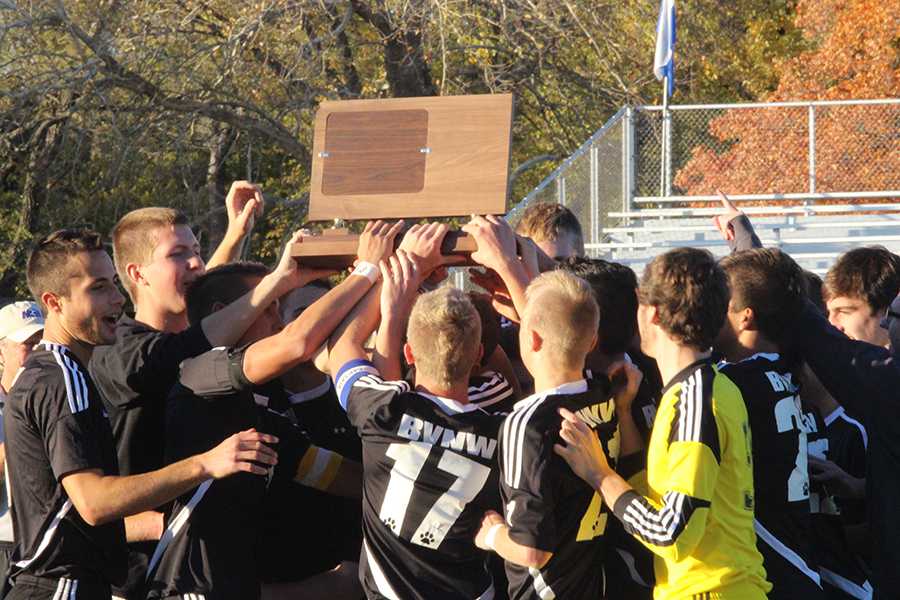 There was a mounting sense of excitement as fans counted down from ten in the last few moments of the state championship soccer game. In desperation, a Manhattan High School (MHS) player fired a long shot from the opposite end of the field, but to no avail. The Blue Valley Northwest boys soccer team sprinted from the field and leapt into the stands as the realization hit that they had defeated MHS 2-0, and become the new class 6A state champions.

“It’s all a blur now,” head coach Rick Pribyl said. “All I could think about was how excited the boys were and how hard they played and how far they’d come. After three years we’ve been coming here in the playoffs and not made it. It’s like the myth of the King who was condemned to push a boulder up a mountain for eternity. Every time he reached the top it would fall back to the bottom. I figured we were stuck losing in the semis for eternity.”

According to senior captain Taylor Wiebke, the team dominated MHS from the beginning. While the Huskies were unable to score until halfway through the first half, they had many good looks and their defense kept MHS’s offense frustrated. With 18 minutes to go, the Husky offense finally connected with a goal when junior Austin Flores headed the ball into the net to give BVNW a 1-0 lead.

“Peyton Brown crossed it in, and I hit it with my left foot into the goal but they didn’t call it,” Flores said. “Then it popped out and Colton Southwell headed it off the crossbar. Then there was just me, the goalie, and one other person right in front of me; and I really wanted the goal so I just headed it in.

“I was surprised I did that,” Flores said. “I was completely excited. Now, when I’m older, I’m going to be able to say I was a state champion.”

Neither team scored for the rest of the half as both defenses clamped up and shut down the opposing offense. While BVNW had multiple opportunities, MHS goalkeeper Casey Hoffman had a few impressive saves that kept the Indians in the game. As the whistle blew to signal the end of the first half, the score remained 1-0 in the Huskies’ favor.

“I’ve been very impressed with our defense,” Pribyl said. “Colton Southwell is the only returning letterman on the defense, so it was built from scratch. All year long we’ve only had nine goals scored on us in 21 games, and that’s not too bad. I give them credit.”

After a few failed attempts by the Huskies to score in the beginning of the second half, Wiebke fired down a long pass toward the MHS goal where Trevor Kerns took it in stride and dribbled fifteen yard to put the ball in the net. This increased the Huskies lead to 2-0  with 35 minutes to go in the game.

“Honestly, I’m not going to say I meant to do that,” Wiebke said. “It was just supposed to be a clearance. But it went to Trevor and then he had a ridiculous finish.”

Moments after the play, Kerns was given a yellow card for inappropriate language and left the game for a few minutes. Pribyl expressed surprise at the call, claiming the behavior was unlike Kerns.

“It’s really strange because he’s normally one of those kids that is very mild mannered and collected,” Pribyl said. “But he was phenomenal today.”

The Huskies did not score for the remainder of the game, but their defense was heavily involved by stopping multiple fast breaks inches from the goal. As the final whistle blew, the team sprinted off the field and leaped into the stands as they celebrated becoming class 6A state champions.

“It feels crazy,” Wiebke said. “This is something we’ve been dreaming about for years, and it finally happened. We’ve come up short for three years in a row and that finally changed. It was a great season.”

Pribyl attributes the success of the team to their chemistry and team work. The Huskies were able to accomplish goals they set at the beginning of the season, Pribyl said, even the little things that most fans would overlook made their coach extremely happy.

“I’m on cloud nine,” Pribyl said. “The best moment was when we counted down to zero. All of the sudden there was a tremendous weight off my shoulders. I have seven sons, and this is like giving birth to an eighth. I’m that happy. I have tears in my eyes.”