Students and administrators piece together their different experiences during the lockdown on Aug. 30. 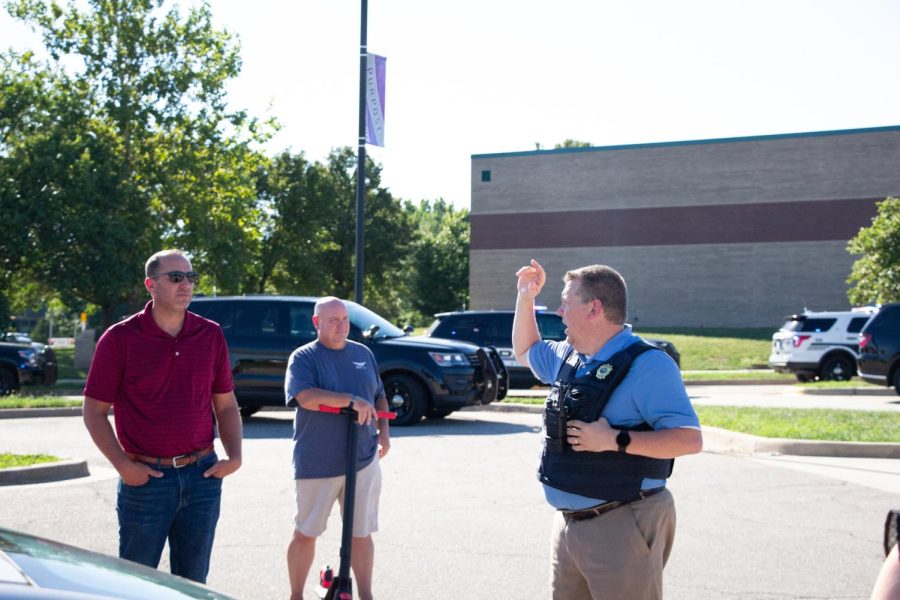 Following the lockdown, members of the Overland Park Police Department and Blue Valley’s Safety and Security Department arrived on site to assist in the investigation, Aug. 30.

Shortly after school was released on Aug. 30, BVNW went into a building-wide lockdown. According to BVNW Principal David Sharp, these protective measures were taken after an armed suspect and accomplice were seen in the Northwest area, specifically by St. Andrews Golf Course at 135th Street and Quivira Road.

At approximately 3:30 p.m, the Blue Valley’s Safety and Security Department was notified of the report from the Overland Park Police Department, OPPD. Kristi McNerlin, the Chief Communications Officer for Blue Valley, said the school went into lockdown because there was a report that the suspects could potentially be in the building.

After being notified of the potential threat, Sharp said he made the decision to lockdown the school and continue with the standard safety protocols.

“I came over the intercom [to] let everybody know that they needed to get to a safe space and lockdown. And that’s what people did,” Sharp said. “They did a fabulous job. In fact, I couldn’t be more happy or proud of the teachers here and the kiddos.”

Within minutes of the school-wide lockdown, Sharp said the OPPD showed up, clearly very well prepared and trained.

“I am so proud of the Blue Valley Safety and Security department [and] the Overland Park Police Department. And then there was the Johnson County Sheriff’s Department, and other responding agencies,” Sharp said.

According to McNerlin, students in the building were held while the OPPD had teams searching the school room by room to make sure there was nobody unsafe in the building. Freshman Dylan Barnes was at dance practice when he was directed by his coach to run upstairs to the school’s cage.

Barnes said he was freaked out after originally hearing rumors of two armed shooters outside the school. While locked down in the back of the cage, he said it was scary because they were directed to stay silent.

“l could hear sirens and I could hear a bunch of voices. I kept hearing footsteps and we had to stay quiet,” Barnes said.

Since school had already been dismissed, McNerlin said officials had to account for any sports and activities occurring at that time. They had to take all people on Northwest’s campus into consideration, not just the individuals inside the school.

“The football team was moved to the locker rooms for lockdown and the soccer team that was playing also had an area where they were locked down,” McNerlin said. “We also [had] a place out here for parents where they [could] ask questions to make sure they [knew] what was going on.”

Senior Megan Stark was at tennis practice, when she said she noticed a teacher run by with some police. Stark said she overheard the officer direct everyone to evacuate the area, so she ran up to the officer to find out what was going on.

“She said, ‘Run away, run across the street. Get as far away from the school as you can, [just] keep running,’” Stark recounted. “And so we started running.”

Leaving behind all their belongings, Stark said the tennis team ran through the soccer fields, passing by the confused parents and soccer players who were in the middle of games.

“We were sort of running to these people’s backyards, but it was kind of a dead end, so our coach had us climb the chain link fence and hop over it to go [into] the woods and onto the trail,” Stark said. “Everyone was taking turns calling their parents, telling them not to pick them up and just let them know what’s going on. And we were just sharing my phone and the coach’s phone.”

While Barnes was on lockdown, he said he heard the suspect was near the District Activity Complex, DAC. His brother was at the DAC for football practice, which caused Barnes to become worried for his brother’s safety.

As Stark and the rest of the tennis team huddled in the woods, Stark said she heard a rumor that the armed suspect was running through the forest. She said her coach then directed the girls to find a more secure location.

“Someone said their friend lived down the street. So we ran through Cottonwood and through that neighborhood, but her friend wasn’t home,” Stark said. “So then the neighbors came outside and it was a Northwest family. And then there was another family with little kids, and they let us in their garage.”

Throughout the ordeal, Stark said the adrenaline and shock kept her focused on running, but also that the rumors got to her.

“I was super scared, especially because there were other rumors going around. Like, we thought people were getting shot,” Stark said.

Once the building had been cleared of any suspects, Sharp said the police conducted another round of room checks and escorted everyone out of the building.

“We opened every locked door that we could to make sure that everybody was secure, and nobody was left behind,” Sharp said.

Students and faculty were released around 5 p.m. Barnes said he heard an announcement on the intercom stating that police were releasing people one hallway at a time. When he was leaving the cage, the dance team was escorted out by police officers.

McNerlin said she believes that in situations such as these, the most important thing anyone can do is make sure people are safe. She also believes it is really important that Blue Valley students and parents understand what is going on.

“Communication with families so that they can be at ease knowing their kids are safe, and that there are just some protocols we’re going through to make sure things are safe,” McNerlin said.

Similarly, Sharp encourages the Northwest community to remember to stay calm in situations such as these.

“Fall back on what you’ve been trained or taught. And then the first thing to do is to try to secure yourself and your people,” Sharp said. “Take it seriously.”