Anger from members and allies of the LGBTQ+ community in response to tweets written by McMullen spark his removal from the school board’s Vice President position. 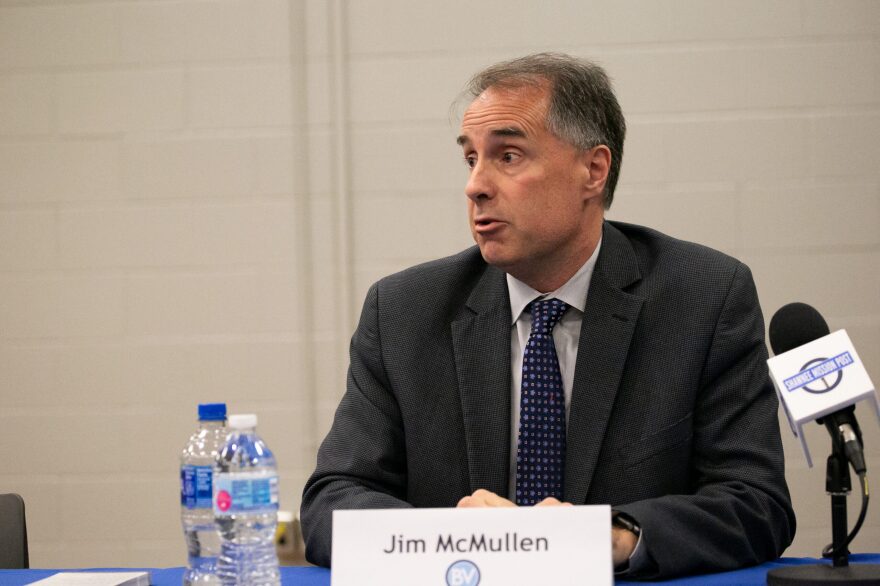 Senior Elise Jessee and orchestra teacher Mike Arbucci were two of over 3,300 people who signed a petition sponsored by ‘Blue Valley For All’ to remove Jim McMullen from his position on the Blue Valley School Board. McMullen will retain his member status on the Board, but was voted out of his vice president title. Jessee said his personal opinions were homophobic and do not belong anywhere near the position he was elected to.

“He is supposed to represent all of Blue Valley,” Jessee said. “I feel like he doesn’t necessarily represent Blue Valley if he wasn’t standing up for every student.”

While Jessee is not a member of the LGBTQ+ community, she said if she was a gay student, she would be upset that someone who is supposed to represent her showed that he did not support her.

“He was voicing some personal opinions that were not necessarily appropriate for the position that he was elected to be in,” Jesse said.

Orchestra teacher Mike Arbucci attended the special school board meeting on April 28, where McMullen was voted out of his vice president role. He said he believes the board made the best decision legally allowed within the framework of how a school board functions.

“It was a meeting that was called off-cycle, so the school board meets once a month on the first or second Monday of the month, and this was added to the agenda,” Arbucci said. “I would assume [it was scheduled] after they received a lot of feedback after his tweets went viral and the petition went out.”

Arbucci thinks there is a very vocal minority that supports what McMullen said, but does not think it is the general feeling in Blue Valley.

“The meeting was probably 70 percent McMullen supporters and 30 percent people who were absolutely appalled by what he said, but I don’t think the meeting accurately reflects Blue Valley,” Arbucci said.  “I was able to attend that meeting because I don’t have a class that hour. I think if other people were able to go and support our students and staff, our LGBTQ+ community, just to be there to support our mission statement, there would have been a lot more, but it was held at a time that we couldn’t do that.”

During the special board meeting, McMullen said his position was pro-every kid, regardless of the situation.

“This appears to be a modern enactment of Arthur Miller’s ‘The Crucible’ for statements I made that are supposedly anti-transgender and anti-LGBTQ. I’ve been quite clear. I believe that so-called “gender affirming care” and gender ideology harm kids,” McMullen said.

He included a list of procedures that he said he does not believe are beneficial for children.

McMullen said the school’s job is to educate kids, who will be much better off if their innocence is safeguarded.

“In the statement I issued to the press last week, I said the following: “Our public school should treat everybody equally, regardless of identity or situation. You treat everybody as you encounter them, and you do so with empathy.” I believe it, and frankly, I have lived it,” McMullen said. “But does that mean we should embrace – or, almost as bad, pretend it doesn’t exist- an ideology that denies biological sex, is designed to confuse kids, and invites kids to hate their God-given bodies?”

Arbucci said McMullen’s tweets do not reflect the mission statement of Blue Valley, BVNW’s values or the district’s statements of diversity and inclusion. Arbucci said he believes it is dangerous to create a culture of people at the top bullying others – especially those who are already a minority voice.

“My thought here is again that in Blue Valley, all means all, and we need to be inclusive. Anytime we are talking about families, and the differences among families, using the word ‘gay’ is appropriate,” Arbucci said. “The same goes for anything LGBTQ+. We shouldn’t be afraid to say these words because all of our students and community should feel safe at school and at work.”

Arbucci said he does not know McMullen personally, so he is not sure if McMullen is homophobic. However, he said the words McMullen used in his tweets were indeed homophobic, whether or not he intended for them to come across that way.

“Homophobia doesn’t just mean fear of something- whether it be homosexuality or anything that is different. I think it is more a lack of willingness and an inability to understand someone who is different from you, and maybe doesn’t fit into your context or box of what is ‘regular’ or ‘normal,’ and that is very troubling for somebody who has been elected into a school district that talks about inclusivity,” Arbucci said.

In an email to BVNWnews, McMullen said he continued to stand by the things that he tweeted, but said short statements (like tweets) can lack context. He dismissed the claim that his tweets were considered homophobic.

“The hurling of insults avoids engaging in a rational discussion. My statements are very critical of “gender affirming care” (which is a euphemism, at best) and gender ideology (the idea that gender exists on a spectrum and takes precedence over biology), and I warn against the push in our culture – facilitated especially by social media – to sexualize children,” McMullen wrote.

McMullen said he believes there are people who disagree with him who would prefer his ideas to not be vocalized.

“I’m articulating ideas on topics that are front and center in the U.S. right now. Let’s not imagine that there’s only one way to think about these topics, or that we shouldn’t discuss sensitive subjects,” McMullen wrote.

Arbucci said although we live in the United States, having freedom of speech does not necessarily mean there will never be consequences for what you say.

Click here to read more about the situation regarding McMullen’s removal.