Boys varsity basketball head coach Ed Fritz announced his retirement from coaching in Kansas. Fritz has been with the Huskies since 2002 and won five state championships with the team. 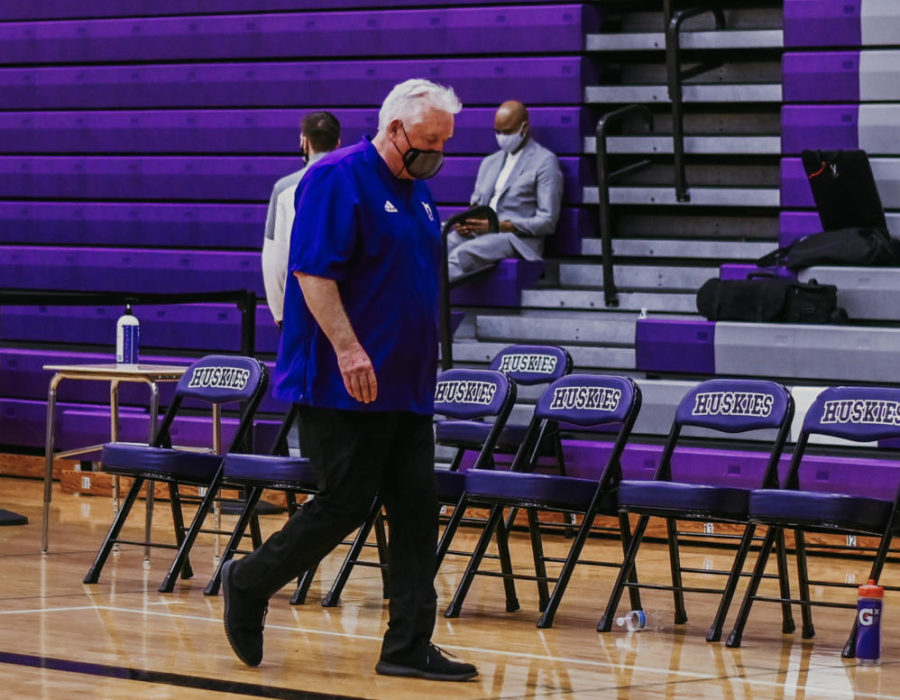 Head coach Ed Fritz walks off the court after being defeated by the Lawrence Lions in the state quarterfinal game. The game would end up being his last time coaching the Huskies.

Boys varsity basketball coach Ed Fritz announced his decision to retire from coaching in Kansas to members of the boys basketball program in the Performing Arts Center this morning.

After being hired in 2002, Fritz would take Blue Valley Northwest to eight state title games, five of which he won. During his time, he eclipsed the 600 win mark and was inducted into the Greater Kansas City Basketball Coaches Association Hall of Fame. In 2019, Fritz was given the honor to coach in the McDonald’s All-American Game.

Despite only working with him for one year, Athletic Director John Hilton took notice of how Fritz built relationships in his program.

“One of the things that impressed me the most about Coach Fritz, watching him this year was just the relationships that he has with his players and the life lessons that he teaches,” Hilton said.

Ready to begin his senior season, junior Joey Robinson was disappointed to hear that it will be without Fritz.

“I was shocked and disappointed. I was looking forward to my senior year with Coach Fritz and to hear that wasn’t going to happen was sad,” Robinson said.

Fritz built his program from the ground up, focusing on starting youth programs to help improve his players, Hilton said.

“He took something, put his stamp on it and built a culture of doing things the right way from building it with the youth programs all the way up to the high school program and helping young men get the opportunity to play at the next level,” Hilton said.

“My favorite memories playing under Coach Fritz go back to playing HBA with him when I was in elementary school. As a kid, I looked up to him and went to all the high school games,” Robinson said.

Playing for Fritz since middle school, senior guard and University of Missouri-Kansas City commit Jack Chapman said he wouldn’t be where he is without him.

“Coach Fritz has been coaching me since sixth grade and so as a player he’s made me into the player I am today. He’s developed me and made me a lot better, but not only developing me as a player, he’s also developed me as a person,” Chapman said.

Leaving BVNW after winning two state championships, Chapman said the legacy Fritz is leaving on the program is all about winning.

“Everything coach did was about winning at Northwest. Every year we were expected to win a state championship,” Chapman said. “That’s the legacy he leaves behind and the mentality the new coach will be expected to have.”

Senior point guard Alston Mason, who is committed to the University of Oklahoma said playing for such an illustrious coach, helped him gain interest from college coaches.

“He’s definitely helped my exposure. He was a big part of the recruiting process for me. He helped reach out to a lot of coaches and helped me get into some bigtime schools so he definitely played a big part in that,” Mason said.

Mason transferred to Blue Valley Northwest in 2020. Despite only playing for Fritz for two years, Mason said he feels like Fritz has the accolades to back up being one of the best coaches in the area.

“He’s one of the greatest high school basketball coaches in Kansas City. He’s won a numerous amount of titles and he’s won almost every award and had many players who have backed up his success at the next level,” Mason said.

Sophomore Grant Stubblefield said he was shocked to hear that Fritz was leaving, but that they will play to carry the legacy he left.

“It’s sad, but it gives us motivation to keep up the standards that he set next season,” Stubblefield said.

Forced to find a replacement, Hilton said Fritz is someone who can never be fully replaced.

“You never really replace somebody like that,” Hilton said. “What you do is hope that you can find a high quality, high caliber character that will come in and take the things that coach Fritz built over the last 19 years.”

*BVNWnews reached out to Fritz for an interview, but at the time of posting this story, we have not received a response.