Cheating through the screen

With the Blue Valley school district’s decision to implement online learning, participating in academic dishonesty during online classes has become easier than ever before. 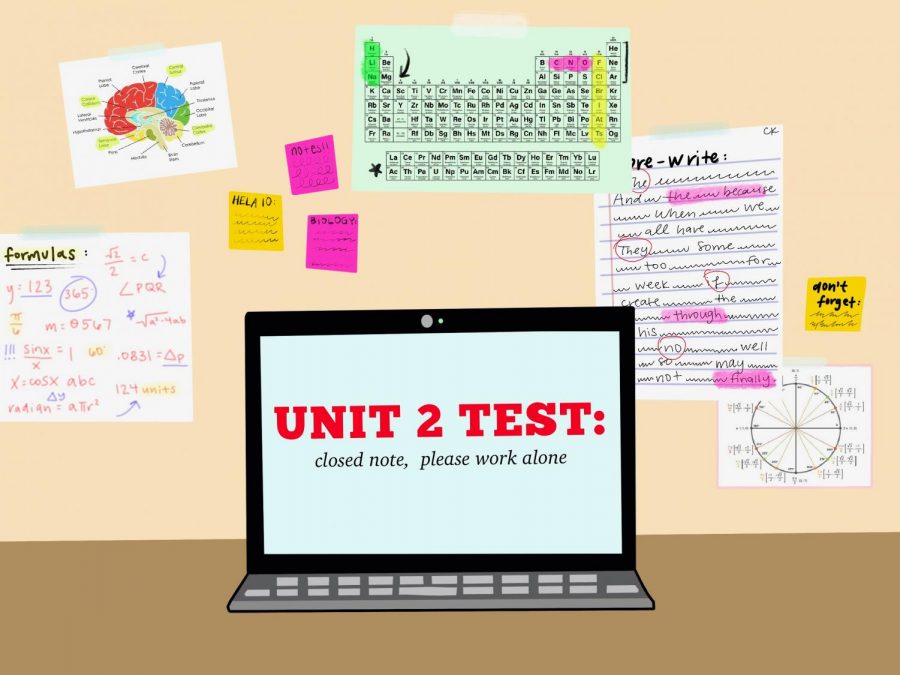 With the Blue Valley school district’s decision to implement online learning, participating in academic dishonesty during online classes has become easier than ever before.

Writing information on sticky notes and sticking them to the computer screen. FaceTiming friends while taking a test. Copying and pasting the question into an online calculator. The methods of cheating are endless, and as former students themselves, mathematics teacher Karen Stohlmann said teachers are aware of them all.

Currently Stohlmann said she teaches both online and in-person calculus classes. Instead of proctoring her exams, Stohlmann distributes her tests through an online website called MyMathLab, she said. Students must complete the test over a specified period of time, she said, while having access to resources such as notes, textbooks and homework while taking their test. However, prior to administering the exam, Stohlmann said she asks students to take the test alone and refrain from using shortcuts such as online calculators. Although Stohlmann said cheating among some students is inevitable, there is no effective way to proctor an exam without being physically present.

The decision to cheat or not also taps into students’ integrity and morals, Stohlmann said. As a previous student in high school herself, Stohlmann said she made sure to exhibit integrity by following the rules and respecting those who implement the rules. Although the unwillingness to take shortcuts may exhaust her or work against her favor, ultimately, she said, every rule includes a reason.

Integrity also plays a large role in academics for Nikhitha Muthineni. As a senior taking multiple AP classes online, Muthineni said the opportunity to cheat presents itself often. Although she said some students cheating is inevitable, her fear of getting caught alongside her integrity prevents her from doing the same.

“If you do cheat, and you do get a good grade out of it, it wouldn’t feel like the good grade is something you deserve,” Muthineni said.

Without the ability to use systems such as Lockdown Browser,a software that prevents students from using online resources during online tests, Muthineni said she prefers open-note tests over proctored tests. While cheating may be inevitable, she said, open-note tests allow academic visibility between students and teachers while continuing to test students’ skills. On the other hand, proctored tests seem unrealistic due to not only the pressure on students to remain composed on camera, but also the high chances of accidents being misinterpreted by teachers as cheating, Muthineni said.

“Sometimes accidents happen, especially on a MacBooks where the entire mouse is controlled by swipes. So, sometimes something like one wrong swipe can kick you out of Canvas and notify [teachers], when it was actually an accident,” Muthineni said.

Most importantly, Muthineni said online learning has shown her the benefits of maintaining integrity. While cheating is an option, students will have to prove their knowledge at some point of another in the future, she said. While temptations to cheat may arise, her paranoia of getting caught coupled with the desire to actually test her skills pushes her to avoid academic dishonesty, she said.

On the same note, senior Isaiah Walker said the chance of facing repercussions outweigh cheating your way to a high score. Instead, students should simply ask teachers for help, Walker said. Oftentimes, he said, he’ll witness peers who cheat their way through tests using online tools but still receive low grades because of inaccurate answers or untrustworthy information online. The students who actually learned the material tend to walk through the test much easier, confident in their answers, he said.

“You can just sit at home, download a math app and get every single answer you need,” Walker said. “With the whole staying on zoom thing, the zoom camera can only see so much of someone’s room.”

Stohlmann said cheating is most often a result of students overextending themselves. Due to overcommitment and lack of time, this leads students to cheating as a shortcut. Students must be more self-aware and cognizant of signing up for classes and activities they actually have the time for.

Ultimately, Stohlmann said those who cheat eventually face consequences to their actions. Whether it be getting tested on the material later, outed to the administration, or confronted by a teacher,

“Lying takes an enormous amount of effort,” Stohlmann said. “Because you have to remember the truth and the lie. And cheating is just a lie. And so I believe, eventually, in some way, it will come back around, and there’ll be some natural consequences to it.”