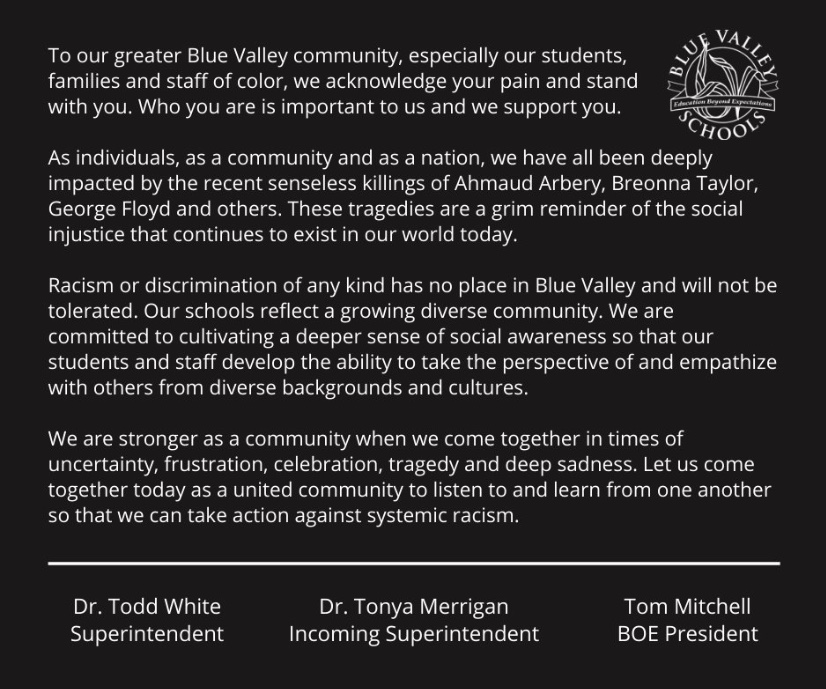 In light of the recent events involving the death of George Floyd in Minneapolis and protests in support of the Black Lives Matter movement all over the nation, the Blue Valley School District released a statement June 3 to their Instagram and Twitter accounts.

The statement was met with negative feedback from the community. The Instagram post has more than 1,100 comments, most of which describe different instances of racism or discrimination at schools within the district. Other comments call for change, encouraging the district to hire more black teachers and implement more black history into the curriculum.

When rising senior Liana Soares De Almeida first read the district’s statement, she said she was confused and felt the district only released it to make sure students didn’t get mad about them not making a statement.

Almeida said she felt the district didn’t own up to their past issues with discrimination and instead simply encouraged students to change, without having a plan for how the district itself would change.

As for the racism Almeida and her siblings have experienced while being within the district, she said it mostly stems from people mistaking them as a different race than Portuguese and applying stereotypes.

“My older sister, who looks like me, she is pretty tan, has experienced it,” Almeida said. “She had a teacher ask her if she was legal in the country and told her to go back to whatever country she came from, even though we were all born in America.”

Almeida said all her Spanish teachers automatically assume she is fluent in Spanish and that she speaks it at home.

“I have had all the Spanish teachers just assume that I speak fluent Spanish, that I speak it at home, even though I am Portuguese and have no Hispanic relation whatsoever,” Almeida said.

As for how she thinks the district can change for the better, Almeida said one way could be utilizing advisory time to educate students about racial issues. Another way, she said, would be to hire more teachers of color.

For Northwest, Almeida said it can change by holding the students more accountable for what they say, as well as making the school community as a whole more educated on racial issues, using the Black Student Union to help.

“I think the main start is just making sure others aren’t saying things that are offensive and making them educated on [racial] topics,” Almeida said. “Even the Black Student Union, we could do so much with that, of them educating more people and just trying to help everyone understand, but the main thing is just making the students listen.”

Rising junior Laura Murambadoro has been a student within the school district since she was in the fourth grade.

Murambadoro said that although she does not follow @bv_schools on Instagram, she saw the post after it was shared within the Black Student Union group chat, which she said lead to a discussion of how they felt it was more of a PR stunt than a sincere statement about inspiring change within Blue Valley.

Following this, Murambadoro said she felt the district’s statement was inaccurate, as she said she has experienced racism every year she has been at Blue Valley, despite the district saying they strive to create a diverse environment without discrimination.

Murambadoro said there have been instances in which she is called the n-word, a slave or her grade’s token black girl. She said teachers have laughed in response, instead of doing something about it.

Another point, Murambadoro said, is that teachers at BVNW do not give enough attention to discrimination, concentrating their efforts elsewhere.

“With Northwest, a lot of the times the actions from teachers I see fuel those types of comments and the way people think because they give more attention to vaping in the bathrooms rather than students being blatantly racist,” Murambadoro said.

Being born in Africa, Murambadoro said she has also experienced racism with people saying ‘go back to where you came from’ and people making fun of African tribes.

“I was born in Africa, so there is a whole bunch of ‘go back to your country’ and obviously with Modern World History there was that unit on Imperialism in Africa, and we were shown a video of what was the stereotype of African chanting and tribal clothing and everyone in the class was laughing and it seemed like the narrative they were trying to push was that all Africans are like ‘oug-buga’ type things,” Murambadoro said.

Additionally, Murambadoro said there are people who suggest that she is blessed to live in a predominantly white area.

“There are also people saying that me being black, I should cherish the opportunity I get to be in a white community because without white people, I wouldn’t have the intellect that I do,” Murambadoro said.

She said there needs to be more black history and what the black community experiences taught in schools.

Also, Murambadoro said highlighting groups of people of color, like the Black Student Union at BVNW, could be another way to appreciate the diversity within the district.

“There needs to be more light brought to groups of people of color, like the Black Student Union, because what we are trying to do is create an environment of equality and just put people of color out there, [and] also make sure Blue Valley as a whole is able to cherish the fact that there is some diversity and we have to embrace it,” Murambadoro said.

Another rising senior, Matthew Bridges, who is white, said he struggled with the district’s post.

“I was a little disgusted,” Bridges said. “Blue Valley preaches all of these good morals and everything but then I don’t necessarily feel like they commit to it, so it was frustrating to see them post that, in a way I feel like it was a little hypocritical.”

In response to the feedback they have received, another post was made to the district’s Instagram account on June 9, it was a message from the Blue Valley Board of Education.

The statement also said that although the district does not have all the answers some may want, it encourages community members to continue to use their voice and express their opinions.

Acknowledging its position to create change within the Blue Valley community, the district’s statement concluded with the idea that this conversation will continue.

“We have a unique opportunity and responsibility to be part of the solution in our own communities and look forward to continuing the dialogue,” the statement from the Blue Valley Board of Education said.

In response to the backlash the district has received, incoming Superintendent Tonya Merrigan said the main goal of the original statement was to acknowledge the pain black families and staff within Blue Valley were experiencing, as well as voice the district’s support.

Another goal, Merrigan said, was to acknowledge the action the district needs to take in order to help combat systemic racism.

Having read each comment attached to the post, Merrigan said she is focused on listening and learning about these issues, so that she can better take thoughtful action.

“I have personally read every comment on social media. I need to hear about the experiences of our students, families, staff and community so that I, and in turn, Blue Valley, can be better and more mindful,” Merrigan said.

As for the changes she intends to make, Merrigan said both the curriculum and the approved book lists will be revised.

“We have begun the process of revising our curriculum, particularly in US History, and adding to our approved adopted novel lists by including books that share different perspectives and shed light on issues surrounding racism, including Ta-Nehisi Coates’ Between the World and Me,” Merrigan said.

When asked if she thought there is discrimination within Blue Valley, Merrigan said it would be naive to think there is not, given all the experiences students have shared with her.

Merrigan said in the fall, the district will develop plans to respond to matters of unconscious bias, systemic barriers and inequity with learning experiences. She also said the curriculum will be revised to shed light on issues involving racism.

Principal Amy Pressly, who said she did not know about the district’s statement until she saw it on social media, said she felt the statement was an honest effort by the district to acknowledge the racism within the country.

Pressly said that as a whole, the district can become a more inclusive place by listening to the students.

“I always believe that we as a school and a district can continue to work to get better, Pressly said. “We want to listen to our students and use that to continue to grow so that everyone feels included.”

As for how Northwest can do better, Pressly said she will look to expand her work with the diversity club so that all students feel they have a voice.

Adding to this, Pressly said the opinions of students mean the most in promoting a diverse school.

“I want to hear the ideas that students have about how to better promote diversity, Pressly said. “It’s most important to make sure what we do is meaningful to our students.”