In support of the Black Lives Matter movement, the Black Student Union plans a peaceful protest for students and families to attend. 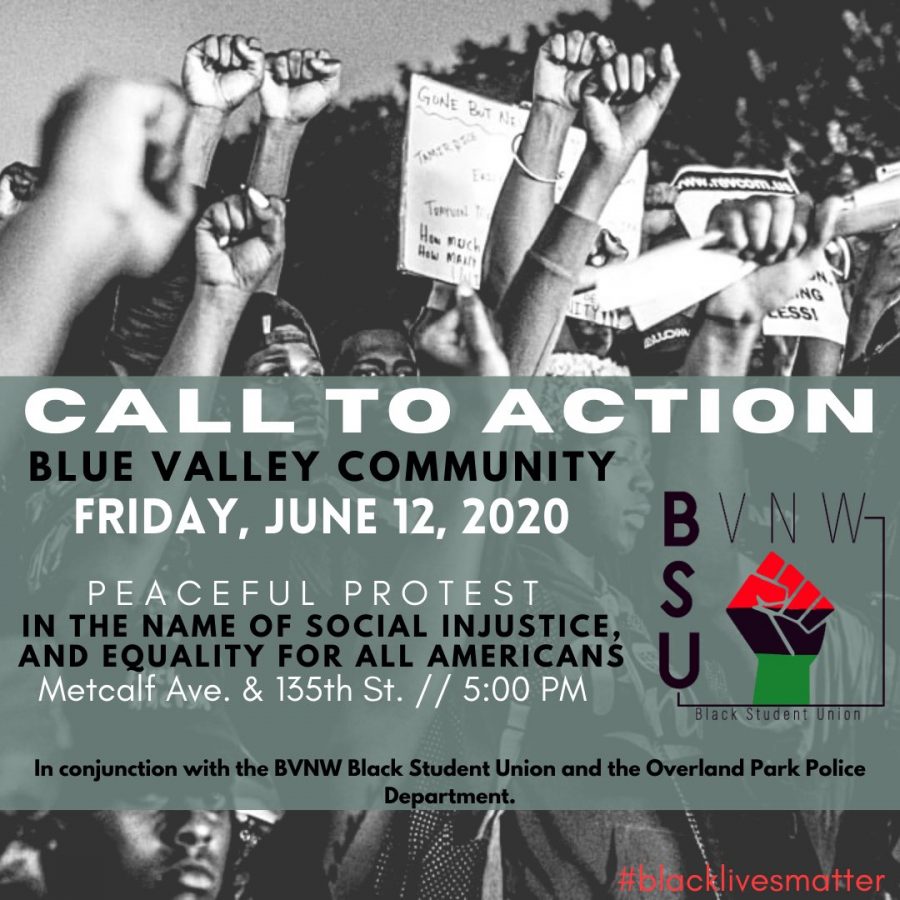 Former Black Student Union President and 2020 graduate Makenzie Iszard helped organize the protest, hoping to create a safe way for students to voice their opinions. Scheduled to take place June 12, at 5 p.m., the group plans to meet in the parking lot of Hope Point Church at 7341 W 133rd Street and walk to the main protest location at Metcalf Ave. and 135th Street.
Iszard said the BSU chose to reach out to the Overland Park Police Department (OPPD) to ensure that all who attended the protest would be safe, as well as hoping to avoid the possibility of getting shut down.

“We chose to reach out because we want to do everything in our power to make sure that this protest is possible,” Iszard said. “And the possibility of it getting shut down is relatively high so we wanted to make sure we were able to actually sustain the protests and keep it going throughout the day.”

The purpose of the protest, Iszard said, is to inform BVNW students of the racial injustice that takes place within the community.

“The goal of the protest is so people in the Johnson County bubble are not blind to the situation that’s going on,” Iszard said. “It’s very easy to simply turn off your TV or just not pay attention to protests.”

Similar to Iszard, BSU sponsor and BVNW teacher Matthew Shulman said he believes the protest will be a way to bring light to the importance of discussing the racial struggles the black community faces.

“The whole point of this is to create more conversations about race and help answer the outcry of the changes that people are hoping for,” Shulman said.

In preparation for the protest, Public Information Officer John Lacy said the OPPD has all proper equipment needed in the unlikely case of violence.

“We do have a protocol in place, officers do have their riot gear, and it’s something that they have with them at all times,” Lacy said. “We have seen nothing but peaceful protest here in Johnson County, which is really good.”

To organize this protest, BSU Sponsor Matthew Shulman contacted the OPPD through Instagram Direct Message, informing the police department of what the organization would like to do, and hoping for support of the protest from the OPPD.

“The police department helped us find the best location but I wasn’t really asking for permission from them.” Shulman said. “We were going to have the protest no matter what.”

Although this was organized by a BVNW club, Izard said the protest is open to any individual interested in educating themselves and others on the topic of racial injustice.

“It was organized by [the Blue Valley] Northwest BSU but we are wanting to make this a community event. Bring your parents, bring people that you think need to be informed,” Iszard said. “I don’t want this to be excluding other people that want to have this type of learning opportunity.”

Lacy said he recommends taking basic safety precautions while protesting to protect all those who are present at the protest from possible danger.

“Stay out of the street. When people run around the officers and get into traffic that becomes hazardous,” Lacy said.
During the protest, Iszard said BSU plans to inform and educate those in attendance by allowing different members of BSU, as well as any other protestors to give a speech.

To anyone who is planning on attending the protest, Iszard said she recommends wearing the proper gear as well as social distancing from others.

“I’ve been promoting wearing your own mask and practicing social distancing. COVID is still an ongoing problem. It’s still important to stay safe, especially if we’re expecting a larger group of people to be there,” Iszard said.

The Purpose of the Black Lives Matter movement, Lacy said, is understood by the OPPD which is why they have chosen to stand in support of the protest.

“It’s OK to be upset, and run off your frustration from what you saw, and we get that, and [the OPPD] is frustrated with [police brutality] just like you,” Lacy said.

The rise of interest in the Black Lives Matter movement Shulman said comes from a generation that is ready for change.
“In this day and age this generation is a lot more accepting than past generations. This is a way to let people know this generation wants change in their schools and community,” Shulman said.