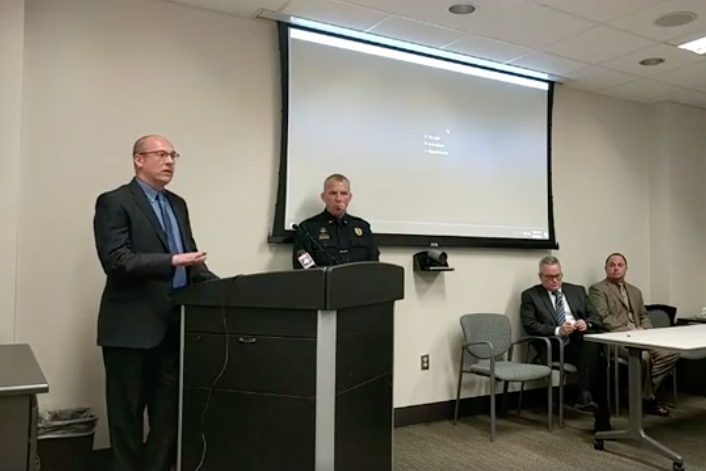 Johnson County District Attorney Steve Howe and Overland Park Police Chief Frank Donchez announced today that the shooting of Blue Valley Northwest junior John Albers on Jan. 20 was justified. The announcement was made during a morning press conference. No criminal charges will be brought against the officer involved in the shooting.

BVNWnews could not reach Albers mother, Sheila Albers, and her attorney for comment today. In an interview with BVNWnews on Feb. 6, Sheila said she did not want to see violence in response to no charges being brought.

“Regardless of what is released,” Sheila said, “I really hope, it is OK to be angry. It is OK to be upset. But I want everyone to be peaceful. Any sort of violent response will not honor John. It will not honor my family. It is OK to say ‘I’m angry, I’m upset, I don’t like how this is handled.’ You can say those things, but I really do not want anyone acting in any sort of violent manner or destructive manner. That will dishonor John.”

Junior Kaity Callahan said she expects students to be very upset with the ruling.

“I think there’s a lot of hate for the officer,” Callahan said. “There’s going to be even more hate. Some people are going to have so much hate. But, no matter how much hate you have for a person that did something bad, it happened and it’s not going to bring [Albers] back. You gotta move forward and the officer probably feels terrible. You gotta be there for him, too. He also went through some things that no one should have to go through.”

Albers, 17, was shot and killed when he backed his car out of his family’s garage and toward a police officer who was outside his home.

“I understand that everybody’s upset because it’s a tragic situation, and no one wanted that to happen that day,” District Attorney Steve Howe told BVNWnews. “Under Kansas law the officer has a right to defend himself from deadly force and based on all the evidence that was gathered, all the witnesses that we spoke to, the video that was presented to my office, we’ve concluded that the officer was justified to protect himself and use deadly force just like any other citizen would be allowed to do that.”

Police were called to Albers’ house after receiving a call reporting that the Blue Valley Northwest junior was suicidal. Sheila said during her interview with BVNWnews she still feels students should seek an adult figure when a friend is in need of help.

“I think it’s super important to still involve a figure of authority immediately,” Sheila said. “I think that whether the police, the fire department, a teacher, a coach, you gotta get adult help right away. That cannot change.”

Typically when Overland Park police officers respond to a mental health related call, they deploy co-responders from the Johnson County Mental Health Center to assist the police officers in the handling of the situations. In Albers’ case, there was no co-responder on the scene.

“Unfortunately in this case, we were not able to deploy those types of resources to help slow down the situation and keep that from getting where actual force had to be used,” Howe said.

Howe and Donchez discussed the findings of the Johnson County Officer-Involved Shooting Team’s investigation during a press conference Tuesday morning.

Sheila Albers told BVNWnews on Feb. 22 that she was invited to meet with Howe an hour and a half before Tuesday’s press conference. Sheila said she had no say in whether the dash-cam footage would be shown to the public.

According to national law enforcement experts and policies used by some of the largest police departments in the U.S., the tactic of shooting into a moving vehicle has been called a bad idea for years. The U.S. Department of Justice and the International Association of Chiefs of Police have backed policies against shooting at moving vehicles, aside from an event in which a weapon other than a vehicle is being used.

The Overland Park Police Department says its officers will not shoot at a moving vehicle “except in self-defense or defense of another [officer] and when the suspect is using deadly force.”

Friend of Albers and junior at Blue Valley West Kassidy Lidgett said via Snapchat Tuesday’s ruling erased any respect she had for the Overland Park Police Department.

“I had a slimmer of hope that the police would admit what they did was wrong,” Lidgett said. “But I guess not. I have no respect for the Overland Park Police Department and it’d be very hard to gain that back. I hope [Albers’ family] sues. And I hope they get the [District Attorney] who resided over this case kicked out.”

Still, Howe said he hopes students will continue to entrust the police in similar situations in the future.

“I still hope people are willing to call the police,” Howe said. “The last thing we wanna do is have incidents like this where someone’s life’s taken.”

The Overland Park Police Department refused to comment for this story directing all questions to the District Attorney’s office, their website and BVNW’s school resource officers.

BVNWnews will be updating this story as it gathers more information.