A candlelight vigil was held Sunday night at Sunset Ridge Elementary to honor junior John Albers, who died unexpectedly over the weekend. 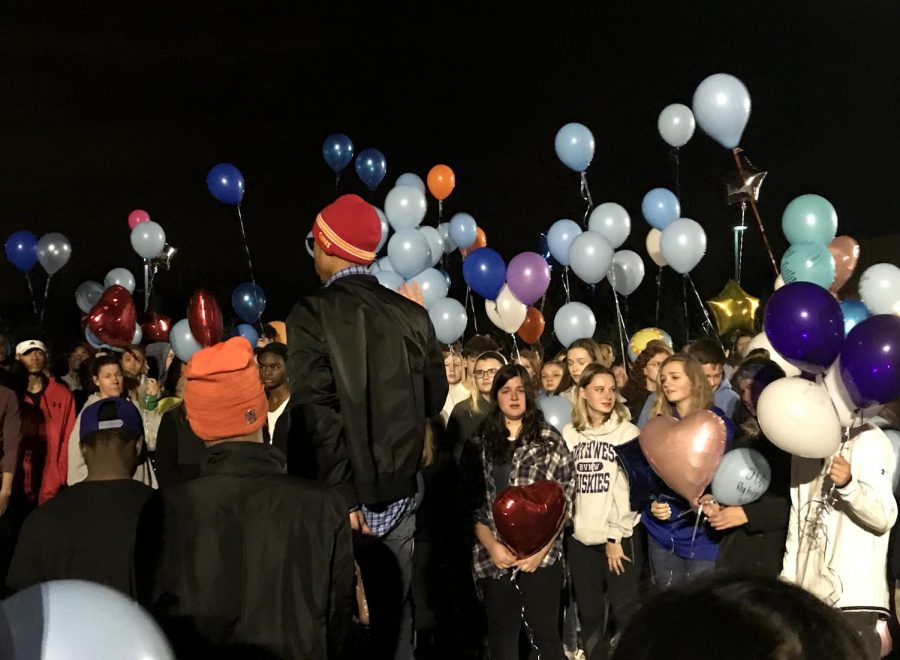 A crowd of people release balloons to honor John Albers.

The Overland Park Police said they are investigating Albers’ death following a police officer involved shooting near 149th and England.

Following the news of his death, students planned a vigil at Sunset Ridge Elementary, where Albers attended elementary school.

While people mourned in the school’s playground, balloons were released, speeches were given, and candles were lit.

Starting a trail of speeches, junior Gabriel Bright said he was a close friend of Albers’ and wants to raise awareness to others about his death.

“I loved him,” Bright said. “I want to raise awareness and make sure everybody knew that this world, this bubble that we live in isn’t always so perfect.”

Despite not having a relationship with Albers, junior Isabella Wallace attended the vigil.

“It makes me feel worse because I didn’t know him,” Wallace said, “so part of me feels like ‘why do I deserve to be upset about it?’”

School interventionist Megan Geenens said she held a special bond with Albers after teaching him in seventh grade and sophomore AVID.

“John had a heart of gold,” Geenens said. “He loved everyone around him. People should learn from his kindness and carry that on with him as they move forward from this tragic event.”

“We are heartbroken at the loss of our beloved son, John,” the statement read. “We truly appreciate the outpouring of support from friends, family and community. Thank you for your thoughts and prayers and for respecting our privacy during this very difficult time.”

A visitation is scheduled for Friday at McGilley Memorial Chapel at 123rd Street and State Line, with a funeral mass scheduled for afterwards at St. Francis Xavier Church in Kansas City, MO.