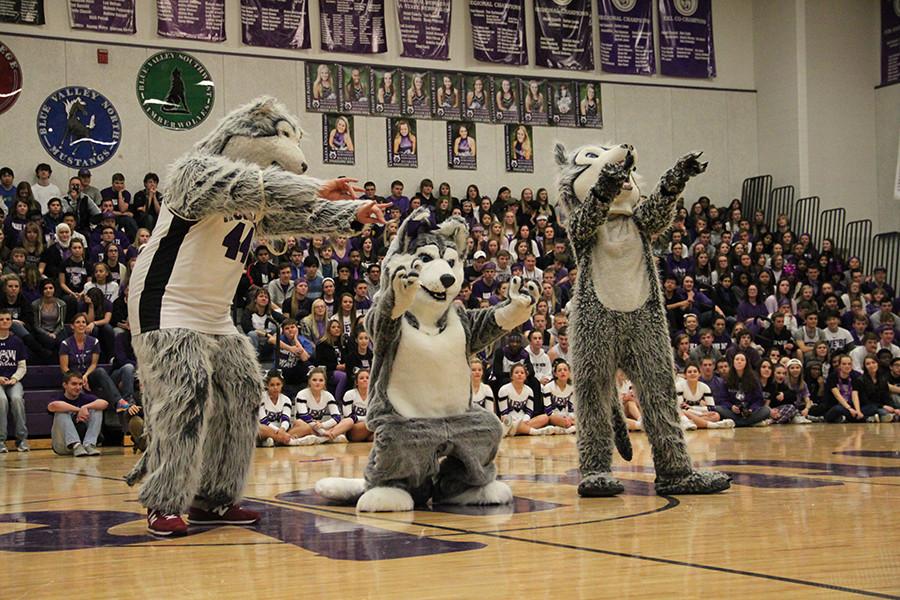 Six BVNW students tried out to be the husky mascot for the 2015-16 school year on April 17. The judges chose Caitlyn Baker, Kendra Christman, Riley Roberts and Tasia Robinson, deciding for the first time to appoint four mascots instead of one.

Judge and head cheer coach Megan Geenens said the contestants had to try out in a way similar to cheerleaders. Three days of practice clinics occurred before the tryouts. At the clinics, Baker said the previous mascot, senior Esha Pahwa, taught the students a two-minute dance. The contestants were scored on that dance, had to react to four given scenarios and then they took their mascot heads off and were asked three questions.

Roberts said it was Pahwa’s idea to have more than one mascot this year to lighten the workload.

“You have to go to every single game and be there the whole time and it’s very tiring,” Roberts said. “They wanted more than one so you could have a life outside of just being the husky.”

Geenens said the judges were not looking for a set number of people. She said it was based on the skill level the contestants brought, and the judges decided the four chosen had the most to bring.

“I think having four mascots sheds light that there’s a lot more people in the school that want to be the mascot, and I think there’s going to be more and more people that try out every year,” Geenens said.

Both Baker and Roberts said they hope to continue Pahwa’s legacy during their time as the mascot. Baker said living up to Pahwa’s role will be difficult, but that she hopes to be able to give the husky a new personality.

“I think each will bring their own personality to it,” Geenens said. “Esha did a great job the past three years, but I’m excited to see what the next four have to bring.”

We are currently waiting for Pahwa’s response to comment.