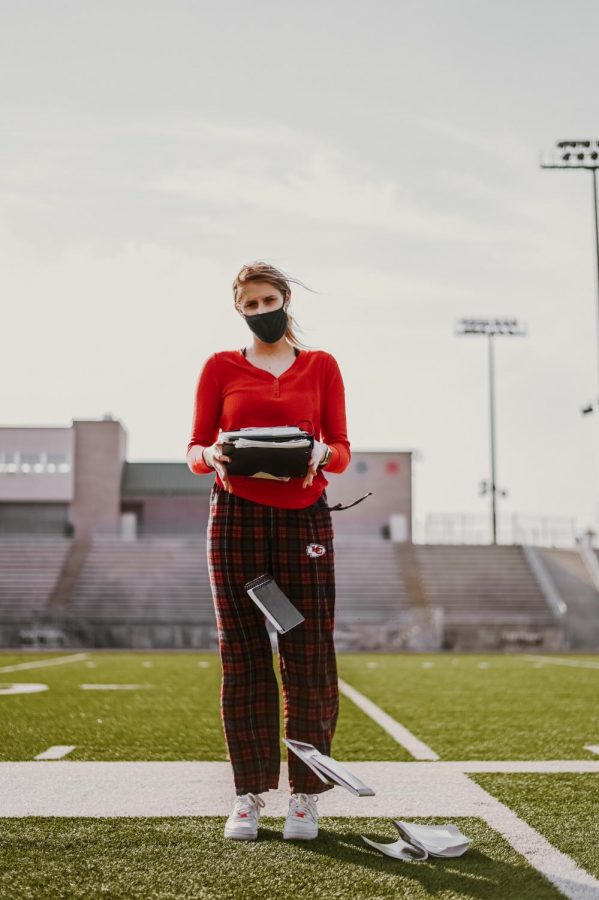 Senior Mary Breau said that it became extremely hard to manage work between classes due to the stress and unique pressure of this school year.

Three and a half years ago, current senior Mary Breau watched the now-graduated seniors sit in the senior section, and thought about her own senior year– her prom, senior skits and assemblies. However, instead of a fun and memorable final year of high school, Breau was met with lower grades, frustration, and what she described as a grade-wide depression.

Curriculum and instruction supervisor, associate Principal Tyler Alexander said that there were instances of lower grades being earned last semester, with a higher prevalence of D’s and F’s than previous semesters. Correspondingly, 62% of students, or 255 students, reported having lower grades this year, according to an Instagram poll of 413 students.

AP literature teacher Valerie Golden said that she has been made aware of the increased number of D’s and F’s across grade levels, and has heard from other schools that this is not a change unique to BVNW. Despite not noticing a lower class average in her own classes, she said that the grades that students earned this year might be different from what the same students would earn in a more traditional year.

Working both at school and at home has caused many students to feel scattered and overwhelmed due to the constant changes and interruptions of not being in a structured classroom full time, sophomore Ainsley Novak said.

Breau said she feels less of a connection with her teachers this year, especially because she said that she herself is a student who actively tries to create relationships with her teachers.

AP stats and geometry teacher Laura Deffer said that for her, stress ebbs and flows. She said that it is challenging to keep all of her students engaged and at the same level. However, she said that she has remained positive and been able to challenge herself for her students

Keeping mental health in mind, Deffer said that she has used different types of assessments this year, trying to think of unique ways for students to show what they know, as opposed to the more traditional paper and pencil test.

Novak said she thinks school this year has increased her feelings of stress and anxiety- a change she has seen in her friends as well. This increase in stress and anxiety has also led Novak to feel a substantial decrease in motivation, something Breau also reported feeling

“I’ve really noticed that things that used to come very simple and easy to me have become harder to do, like easy assignments and easy projects, I find myself procrastinating, whereas I usually would not have been doing that in years past,” Breau said.

Alexander credits lower academic performance to the stress and changes in the way of life that COVID-19 brought on, and not just for students. Parents, teachers and administrators are also feeling stressed.

“Teachers have struggled with this process- it’s been really difficult to essentially change how they’ve taught- some for thirty years- now have to flip everything upside down from what it used to be,” Alexander said.

However, Alexander said it is important to know that the changes have been hard on everyone, and teachers genuinely want to help support their students.

BVNW math teacher Karen Triebel says she has seen a lot of positive changes made this year that are working to try and combat stress.

“I feel like the school has tried very hard to put in supports with the new academic support time and academic check-in times for students to get help, I know that I offer times when we are hybrid, anytime after school kids can Zoom in with me, or come see me in person if they’re at school that day if they need extra help,” said Triebel.

Despite all the changes present this year, Alexander thinks this school year has been one that taught students valuable lessons.

“I think a lot of students have had to take more ownership for their learning this year than ever before, and for those that have really embraced that, I think there has been a lot of personal growth,” Alexander said.

Despite grades being lower this year, Alexander believes there have been some lessons students are learning that will go on to help them in the long term.

“I think there will be a lot of proud moments when students look back in a couple of years and think about all that they have been doing to get through and still learn and take care of what they have been needing to,” Alexander said.