Returning to the Pack

For the incoming 2019-20 school year, 2019 graduate Matthew Maher has returned to BVNW as a para. 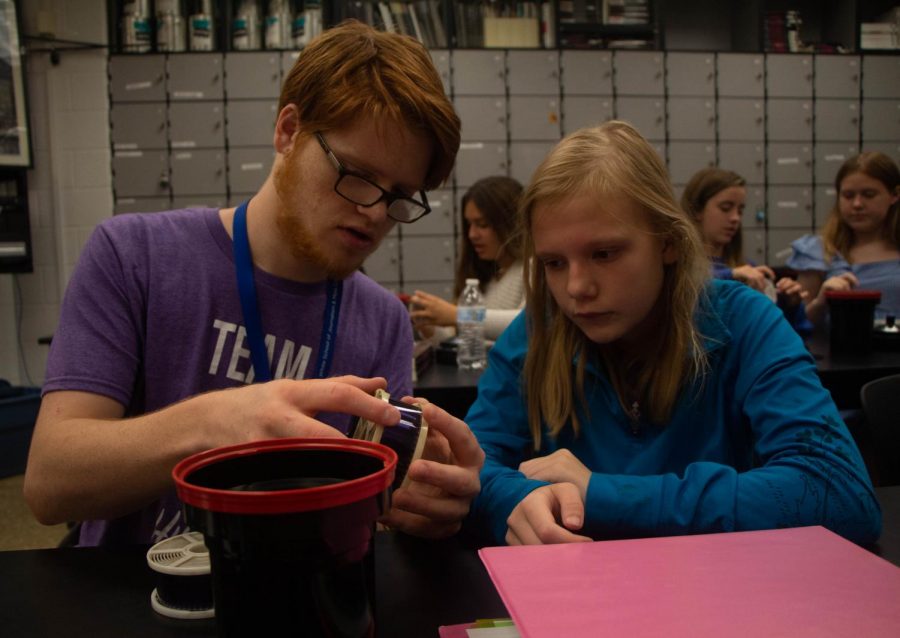 Matthew Maher helps sophomore Ashleigh Eblen develop film in art teacher Melanie Mikel’s photography class. “The students are always so happy to be there. They don’t judge anyone and they always come in with a smile on their face,” Maher said.

Diagnosed with autism at the age of four, BVNW alumnus Matthew Maher said that he felt different in his own skin, mentioning he struggled with relating to people. After beginning the Connections class his senior year and now working as a para, Maher said that the judgement- free course and classroom made him feel confident and at ease with being on the autistic spectrum.

Initially, Maher said he never believed he would come back to Blue Valley Northwest. Maher graduated in the spring of 2019 and planned on taking a gap year because according to him, “school wasn’t [his] thing”.

After dropping Husky Headlines due to stressful circumstances first semester of his senior year, Maher said the only available class to take was Connections-a class that promotes social skills development and building friendships for individuals of all abilities.

Friend of Maher and fellow 2019 graduate Lauren Spector said that she helped Maher adjust to to Connections his second semester, by giving him insight on how to accept Connections as a whole.

“I helped Matthew transition by sharing stories and the joy that the students had brought to me,” Spector said. “I made sure that he knew it was a place to feel loved and accepted and that when you fully embrace Connections, it’s one of the best things in life.”

After joining the Connections class, Maher said he found the atmosphere of the class relaxing and it allowed him to be himself when he’s there.

“The atmosphere in there is incredible,” Maher said. “They really bring you a lot of joy, because there is no judgement in that room. You don’t need to act like you’re a different person when you’re in there.”

Knowing that Maher is on the autistic spectrum, Lauren Richter, an Intensive Resource teacher, said she believes he connects better with the kids because he can relate to them on a personal level.

“Matthew’s experiences and perspectives are valuable because he knows what it feels like to maybe sometimes feel different,” Richter said. “But, I think it makes him really relatable to our students, and he doesn’t let that get in the way of who he is. He’s a really good role model for our students. [It] doesn’t matter what your ability is, if there’s something you want to do, you could do it if you set your mind to it.”

Richter said that Maher was a good fit for the upcoming para job opening for the 2019-20 school year because he clicked with the kids and he was devoted to helping in Connections.

“We got to know him not only through connections, but he would also spend 7th hour coming in and just giving time during his study hall,” Richter said. “He was fabulous with our kids, it was an instant click. You could tell Matthew has a heart for working with individuals with special needs and he was just really dedicated to it. That made him stand out as someone who might be a good fit for being a para.”

After Richter discussed the available para job with him, Maher said he applied over the summer after graduating. Maher later had an interview with principal Amy Pressly, and was hired for the 2019-20 school year.

As a para, Maher said that his job is to accompany and help the kids, but to also let them be independent with themselves.

“[In] some classes I will sit in the back because the kids are more independent,” Maher said. “If they need help, or if they’re off task, I will walk up to them and say ‘we need to be on task’. Every para does a little bit of both: one on one and letting the kid work by themselves.”

Thinking of the future, Maher said that he plans on taking classes online at Johnson County Community College and getting his undergrad in teaching. Overall, Maher concluded that he could become a special education teacher quicker by working as a para; working as a para now could strengthen those chances.