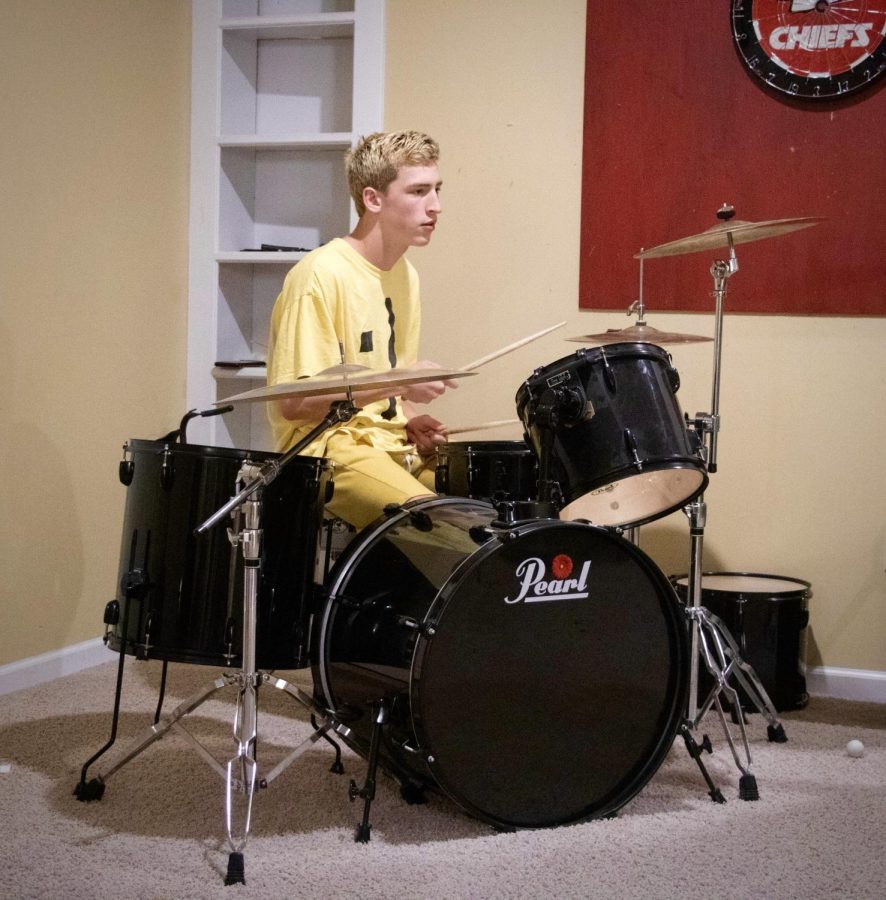 Senior Watchman Whitworth plays the drum set with his band, on Sep. 6.

Whether playing the piano or strumming his guitar, aspiring musician senior Watchman Whitworth can normally be found doing something music related. Toni Whitworth, Whitworth’s mother, echoed how Whitworth needs to be occupied to satisfy his musical craving.

“Like just watching TV, he’s got a guitar in his hands. Or he’s in the bedroom on his piano,” Toni said.

“There’s a big part of it that he does in school, it’s running through his head. He’s always thinking of ideas,” Helms said.

Whitworth and Helms play in House Cat together for fun and do not publicize their music.

Whitworth said he uses his experiences of recovery from drugs and alcohol as motivation for his writing and playing.

Whitworth’s recovery consists of group meetings to help both him and other members overcome their addictions. His experiences throughout recovery, Whitworth said, helped him to create the lyrics with depth and meaning.

Sam Shoemaker, a fellow musician and Blue Valley Northwest student, said Whitworth shows his passion for his music in his daily life. Shoemaker said Whitworth is a very spiritual person and that he knows what he wants for his life. As well as how this shows through his passion and his music, as well as his commitment.

“His music is part of him in a way, because he puts a lot of his heart and soul into it,” Shoemaker said.

Thinking back on the lyrics and his experiences, Whitworth finds his past to have a lot of meaning in his singing and writing.

“The story line has similarities to my recovery,  and it’s just really cool,” Whitworth said.

“Blue Room” is posted on Soundcloud and Spotify for listeners to access, as well as the solos, which are on Youtube.