A group of BVNW cross country members continue their training after the season to participate in an annual half marathon, the Pilgrim Pacer that took place Nov. 15. 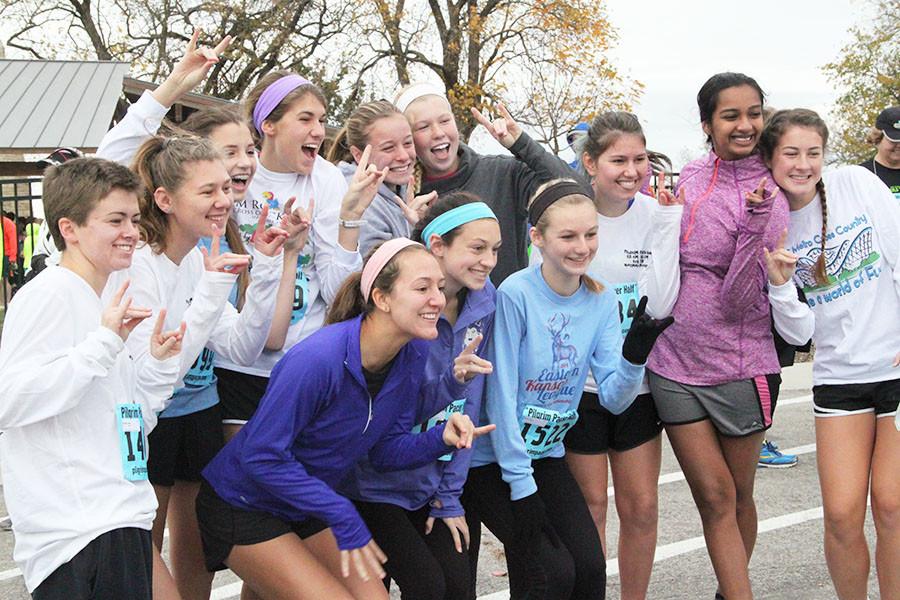 Certain members from the cross country team participated in the Pilgrim Pacer half marathon Nov. 15. These students prepare and train for a fall half-marathon on their own time each year, keeping their stamina and skill after finishing the cross country season in October.

Senior Sarah Hansen has done the post-season marathon for three years, including the year the tradition began.

“When I was a sophomore, a couple of the upperclassmen did runs outside of the cross country season, so like 5Ks and other half marathons, so we decided to do one kind of as a girls team,” Hansen said. “We just kept that tradition going this year and last year.”

Hansen said she continues to run the half marathon every year because it is a fun way to bond with teammates at the end the season and stay in shape.

“It kind of makes me feel accomplished, because I was never a varsity runner or anything,” Hansen said.

Hansen said this year’s half marathon was more successful because it was warmer and Hansen said she trained more this year.

She said if she were to do something different, it would be to train more consistently.

“The training actually helped, because we built off our endurance in the season, and then in the postseason too by running still after the season ended,” Hansen said. “That definitely helped keep us going and we were able to run the entire race and not stop and walk at all.”

Hansen said how the team prepares is similar to how they train in the season. However, she said instead of doing hard workouts, like pace days and track workouts, they focus on distance.

“[Training] is in smaller groups, but we try and have big groups running with everyone that’s doing it, just because it makes it more fun and it’s easier to pace off other people and you don’t get tired as easily if you’re running in a group, but if you can’t go, you’ll just run on your own,” Hansen said.

Junior Sophie Levine, a cross country member running her first half marathon this year, said when she trains, she is not trying to see how far she can go, but rather tries to keep up her milage so she can go farther than she has been. Levine said she prefers to train in a group.

“[Running with others] motivates you more to keep running, whereas on your own, you might be more tempted to stop or take a break if you’re tired, but when you’re running in a group and they keep running, you’re more motivated to run with them,” Levine said.

Hansen said half-marathons and community races allow her to continue to practice and grow in her sport after her last season on the BVNW cross country team.

“[Participating in half marathons] is something I can do outside of high school when I won’t be on the cross country team,” Hansen said. “Like in college, I can still run half marathons and run other 5Ks, so I guess [a benefit of running in the half marathon] is just like letting myself be able to run just for fun, not for school or anything, but freely.”